Prince Harry and Meghan Markle’s forthcoming royal baby may well never be a prince or princess because of century-old protocol. But if the Duke and Duchess of Sussex have a baby girl, she will never be a duchess either – even though the first-born son of the royal couple have could become a duke.

Markle – who describes herself as a feminist on her official royal biography page – hasn’t revealed the sex of her baby. But her pregnancy has highlighted what some say is a glaring injustice in the U.K.’s laws on nobility: with few exceptions, women are not allowed to inherit their father’s titles. That means, though Meghan and Harry’s son would be born the Earl of Dumbarton and eventually become the Duke of Sussex when Harry passes away, their daughter would not be given the title of countess or duchess.

If the royal couple have no sons, the title would die out or possibly pass to a distant relative. “The Queen has done all she can to change this,” Imogen Lloyd Webber, a royal watcher and ABC News royal correspondent, tells TIME. She says any change “has to come from the House of Lords.”

But in 2013 the House of Lords—which is made up mostly of former members of parliament, individuals given honors by former prime ministers, and members of the aristocracy — voted down an attempt to remove the word “male” from the U.K.’s primogeniture laws, which govern inheritance of titles. (The House of Lords has nearly three times as many men as women.)

The British nobility, also known as the peerage, dates back to the 12th century, when English monarchs began awarding titles to wealthy landowners. According to a 2010 study, a third of the land in Britain is still owned by the aristocracy. Along with titles, nobles got a voice in government, sitting in the House of Lords, which until the 16th Century was the more powerful branch of the British government. Today, it has a role in amending and vetoing legislation put forward by the elected House of Commons. In 1999, the number of hereditary seats in the House of Lords was limited to 92 (out of 797 total seats), with nobles entitled to put themselves forward to take the seats when one of the seats becomes available.

In July, five British noble women filed a case against the U.K. government at the European Court of Human Rights in Strasbourg, France, arguing that the system amounts to “state-sanctioned sexual discrimination” and violates Article 14 of the European Convention on Human Rights.

Charlotte Carew Pole, leader of the group, says she’s aware that their case may seem trivial to some. “One could argue that titles are irrelevant and that may be a very good point. But while they exist, it is outrageous that women can’t inherit them,” she says. Carew Pole, whose husband is heir to the Pole Baronetcy, got into the fight because of her 3 year-old daughter, who stands to lose her title to her two year-old brother. “I don’t want my daughter to feel that she’s not as good as my son,” she says.

Since the 1960s, lands have not necessarily had to be passed down to sons, but Carew Pole says many aristocratic families “prefer to keep lands and titles together” and therefore usually favor sons over daughters.

“From Prince Harry down to a sheep farmer on a mountain in Wales, they will leave their land to a boy,” says Liza Campbell, who has the title of lady, though she doesn’t use it. She is the second daughter of the 6th Earl of Cawdor. The title, also known as Thane of Cawdor, was made famous by a character of the same name in Shakespeare’s Macbeth. When Campbell’s father died in 1993, the earldom passed not to her older sister but to her younger brother, Colin.

Campbell says she’d be happy to scrap the system of nobility, “if that’s what people want,” but that wouldn’t erase sexism within aristocratic families. “In terms of inheritance, the sexism would just get swept under the rug. We need a rule to tell fathers: You can’t treat your daughter as a lesser creature than your son.”

For Carew Pole and Campbell, the most serious consequence of the male heir rule lies in the fact that women are excluded from the hereditary seats in the House of Lords. “That means almost an eighth of our upper house is reserved for men,” Carew Pole says. “It’s staggering.” Only one of the 92 peers is currently a woman: Margaret of Mar, whose family’s title is one of the few in the country that can pass to a female heir.

Historically, the royal family have avoided taking up their seats in the House of Lords, meaning it’s unlikely that a daughter of Meghan and Harry would be disenfranchised by that factor.

Carew Pole hopes she may have a new ally in the Duchess of Sussex. “You would think that the feminist princess would wholeheartedly disapprove of the fact that women can’t inherit,” she says. “But of course, she’s not allowed to say anything because she’s a royal now.”

There is no law against the royals having political opinions, but since the Queen’s constitutional role is to represent the entire country, the royal family typically refrains from taking sides in political issues to avoid making life difficult for her.

Campbell believes it’s unfair that Harry’s children will be “stuck in a sexist system,” while the children of his older brother William will not, thanks to the U.K. parliament updating royal succession laws in 2013. The law means Princess Charlotte, 3, was not bumped further down the line to the throne by her five month-old brother Prince Louis. “It seems a pretty stark difference,” Campbell says. “It’s just absurd.” 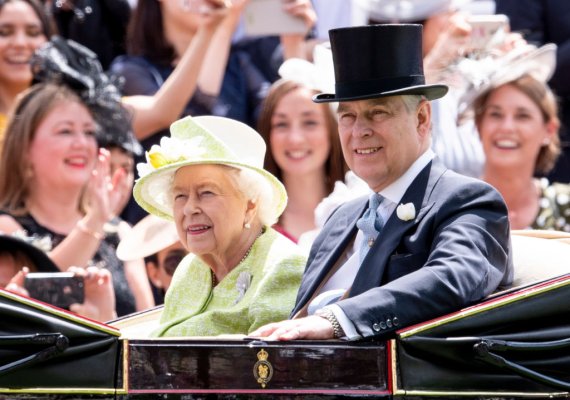 Prince Andrew Faced Questions About Jeffrey Epstein for Years. Here’s Why the Royal Family Finally Reacted
Next Up: Editor's Pick