A 2,000 foot-long floating pipe connected to an enormous net arrived Tuesday at its destination in the Pacific Ocean to begin cleaning up garbage.

The U-shaped pipe is connected to a 3-meter-deep net to help trap litter. It is also remote controlled, according to CNN, and equipped with GPS-enabled buoys and satellite receptors to communicate with nearby boats.

A garbage hauling boat will make repeated trips between the pipe and shore every few months to remove the accumulated plastic, which Ocean Cleanup reportedly hopes to recycle.

Earlier this month, Ocean Cleanup conducted a final series of trials to ensure that the system could be properly deployed in the Pacific Ocean and adapt to changing water and wind currents.

“The coming months will give System 001 plenty of opportunities to prove itself and we are hopeful that it will continue to pass the tests,” the company said in a statement.

Founded by inventor Boyan Slat in 2013, Ocean Cleanup hopes its unconventional apparatus will be the much-needed solution to the spiraling ocean trash crisis. An estimated 8 million metric tons of plastic waste finds its way into our oceans every year, and that burden is expected to grow.

Ocean Cleanup has said it plans to halve the size of the Great Pacific Garbage Patch just five years, and remove 90% of the plastic in the world’s oceans by 2040. An early iteration of its system was featured on TIME’s Best Inventions of 2015 list.

But others have criticized Ocean Cleanup’s approach as costly and less effective than other efforts, such as volunteer beach clean-ups, and warned that it could accidentally ensnare sea life. 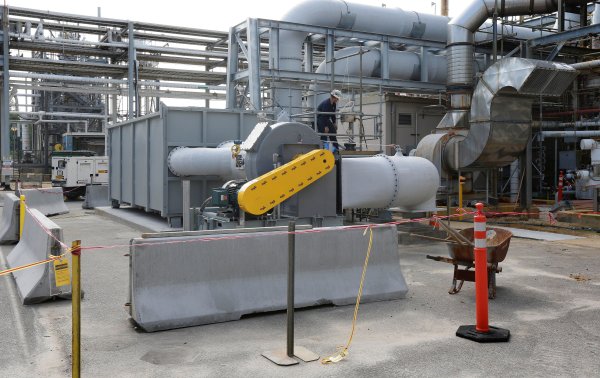 Governments Are Failing Their Citizens on Climate Change. Here’s How They Can Fix It
Next Up: Editor's Pick