Colorado Was the First State to Enfranchise Women Through Popular Referendum. Here's How It Happened

Suffragettes carrying a banner announcing that 'Women have full suffrage in Wyoming, Colorado, Utah and Idaho' at the Women of all Nations Parade in New York on May 3, 1916
Paul Thompson—Getty Images
By Jennifer Frost / History News Network

“Western Women Wild With Joy Over Colorado’s Election,” journalist and suffragist Caroline Nichols Churchill exclaimed, following the victory for woman suffrage at the polls in Colorado on Nov. 7, 1893. This success made Colorado the first state to enfranchise women through popular referendum, and it happened over a quarter of a century before the achievement of national women’s suffrage in 1920.

As we celebrate the 125th anniversary of this success, the time is right to reflect on why women in the state of Colorado were able to win this early, significant and surprising suffrage victory. And, just as women across the nation use their hard-won voting rights to participate in the 2018 mid-term elections, what its historical lessons are for us today.

This victory for “equal suffrage” was no small achievement. Unlike winning the right to vote through legislative action — as happened in the territories of Wyoming in 1869 and Utah in 1870 — Colorado suffragists needed the support of male voters to secure the franchise. They had to convince a majority of men in the state, not just legislators, that they should share political power with women. Sixteen years earlier, in 1877, when the question of women’s suffrage was first put before Colorado voters, they had failed to do so. In fact, of 480 campaigns to put votes for women on the ballot of various states in the 19th century, only 17 actually reached the ballot, and a mere two, in Colorado in 1893 and Idaho in 1896, met with success.

Earlier explanations of why women first gained the right to vote in western states like Colorado drew upon the popular “myth of the frontier,” which held that the West was a place where freedom, independence and democracy reigned. In this view, the voting franchise naturally extended to western women. Later interpretations contended that political leaders in the West granted woman suffrage to enhance the image of their states or territories and encourage white women to come and settle. But as we know now woman suffrage did not just “happen.” Men did not simply “give” women the right to vote. Instead, women’s suffrage was won only after decades of political work and organizing by suffragist activists and occurred within very specific local contexts.

Colorado suffragists started by building a strong and diverse political coalition aimed at winning votes for women. The Colorado Woman Suffrage Association, established in 1876, was at the center of the coalition. But organized support for woman suffrage existed among temperance advocates in the Woman’s Christian Temperance Union, among farmers in the Grange, Farmers’ Alliance and the Populist Party, among workers in the Knights of Labor and other unions, among white and black clubwomen, among male and female journalists, and in the political parties. These different coalition members did not and could not agree on every issue, but they could come together for women’s suffrage.

The role of political parties in the suffrage coalition cannot be underestimated. Political gains by the Colorado People’s, or Populist, Party, in 1892, including the election of Governor Davis H. Waite, set the political context for a suffrage victory in 1893. The surge in support for the Populists and their agenda of reform upset the balance of power between the Republicans and the Democrats. For Populists, like Waite, extending the right to vote to women was both consistent with political principle and served the end of practical politics. After all, the People’s Party was committed to “equal rights for all, and special privileges to none,” yet enfranchising women also would be one way for the new party to increase the size of their loyal electorate. In the end, it was the Populists who introduced the 1893 suffrage bill in the Colorado legislature and proclaimed it law following the referendum. Openings and opportunities for political change can be provided by challenges to the two traditional parties.

Political shifts in Colorado were reinforced by dramatic economic and social developments in 1893. The combination of the repeal of the 1890 Sherman Silver Purchase Act, the financial Panic of 1893, and subsequent depression sent Colorado’s economy into a tailspin. Colorado suffragists shared the distress and anxiety felt by the rest of the citizens of their state. They also linked woman suffrage to broader economic and social conditions, arguing that women would extend their caretaking responsibilities beyond the home and use their vote to reform society. The dire circumstances of 1893 and the convincing case made by women suffragists propelled male voters to explore alternatives to “politics as usual.”

National connections and events further illuminate suffrage developments in Colorado. Colorado suffragists received funds, advice, and personnel from national and other state organizations. Carrie Chapman (later Catt), president of the National American Woman Suffrage Association, stumped in Colorado during the 1893 referendum campaign. Chapman’s efforts were effective, as she had just forged unity among two formerly rival associations and rejuvenated the national effort. In turn, for many on the national level, Colorado’s success in 1893 provided a concrete example of how to build a social movement and achieve political aims.

One hundred twenty-five years ago, prioritizing local contexts and coalition-building, paying attention to political, economic, and social developments, and connecting to national allies brought Colorado’s campaign for equal suffrage to a successful conclusion. But the 1893 referendum was not the first time women tried to get the right to vote in Colorado. They tried in 1876 when the new state was writing its first constitution and again in 1877 in their first attempt at a popular referendum. With these failures, they deeply understood the “difficulty in overcoming the fixed habit of masculine supremacy.” But they persisted. They innovated. And 16 years later they changed politics in Colorado, had an impact beyond their state’s borders, and left us with a historical legacy to learn from.

Jennifer Frost teaches U.S. history at the University of Auckland, New Zealand—the first nation in the world to achieve women’s suffrage, which it did—just like Colorado—in 1893. For more information about the achievement of Colorado women’s suffrage, see her collaborative digital project on the Women and Social Movements in the United States, 1600-2000 website. 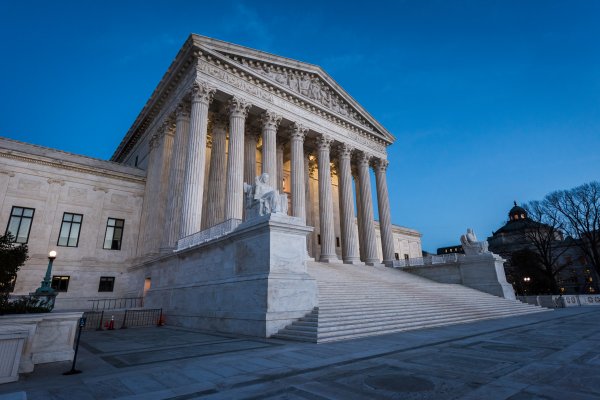 How a Conservative Supreme Court Could Actually Benefit Progressives
Next Up: Editor's Pick