Remember Palm, the company behind those handheld PDAs (no, not that kind of PDA) that were so prevalent in the 90s? It’s back Monday with something truly weird: The Palm, a tiny Android-powered smartphone that’s meant to supplement, not replace, your current handset. You can’t even buy the Palm on its own — it’s available only as an add-on to your existing smartphone plan, and, at least for now, only on Verizon.

The idea here is that the diminutive Palm offers a way to stay connected when you don’t want to lug around your primary smartphone, which, if you haven’t noticed, has utterly Hulked out over the last few years. Apple’s smallest offering, for instance, is now 5.8 inches across, a relative monster compared to the now-dead iPhone SE’s 4 inches.

The Palm looks useful enough: It get calls and texts, it has front- and rear-facing cameras, and it runs apps like Spotify via the Google Play store. It’s small enough to easily toss in your purse for a night out or in your gym bag for a quick workout. Palm wants you to think of it as the Mazda Miata you take out for weekend drives rather than the Ford Escape that gets you to and from work every day. “Palm isn’t a replacement for your primary smartphone, it’s a fully connected companion that is in-sync with your primary device, making mobile truly mobile again,” reads Palm’s website. (It’s also pitching the Palm as a way to help people “get out of their tech and into their lives,” but the solution to tech overload is rarely more tech — it’s better mastery of your settings and an occasional willingness to silence and ignore your phone.)

But Palm’s “phone companion” pitch quickly breaks down for exactly the same reason most people don’t have separate workday and weekend rides: Cost. The Palm is $349.99, then you have to pay Verizon every month to keep it on your plan. Even if the idea of a smartphone sidekick is appealing, that pricing is going to be prohibitive for a lot of people — though you have to begrudgingly respect the tech industry’s brazen attempt at getting people to buy not one but two smartphones. And while the Palm is a welcome experiment in a generally snoozy gadget category, it’s not likely to become a massive hit, even with a celeb endorsement from Stephen Curry.

Companies like Apple and Samsung are making bigger and bigger devices because they tend to sell well. But that’s leaving the smaller-handed among us in the dust — Apple in particular caught a ton of flak for canceling without replacing the iPhone SE. There’s some logic there: It’s tough to design an interface that works well on a 4-inch screen and the gargantuan 6.5-inch display on the iPhone XS Max, the company’s biggest-screened offering to date (to be fair, it’s the same physical size as the older iPhone Plus models, but with a bigger screen thanks to the new design.) But the move still snubs people who prefer smaller gadgets. Even I struggle with the iPhone XS Max, and I’ve got big mitts and long fingers that’d make me a decent pianist if anybody ever explained to me what exactly a treble clef is.

So Palm’s entire raison d’etre stems from the mainline smartphone makers’ abandonment of the comparatively small-handed, or just people who prefer smaller devices. Those folks shouldn’t have to pay a $349+ premium just to have a device that better suits their needs — there should be both high-end smartphones small and large alike, just like Mazda makes both the Miata and the seven-passenger CX-9. Remember when miniaturization was seen as the height of technological progress? Let’s resurrect that ethos. And when it comes to the phablet fans and the mini-phone stans, let there be peace in our time. 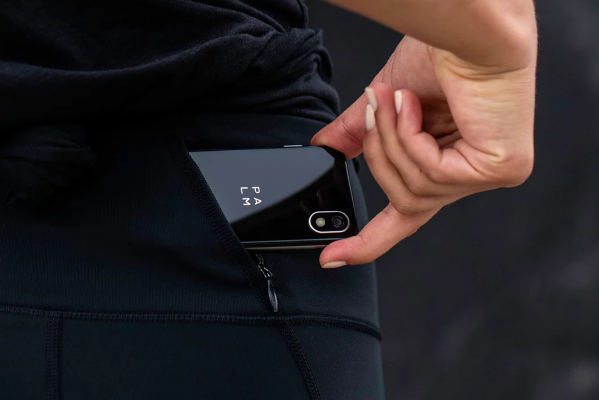 Remember Palm? It's Back With a Tiny Sidekick for Your Gigantic Regular Phone
Next Up: Editor's Pick