Massachusetts Sen. Elizabeth Warren published a DNA test on Monday that she says shows that her claims to Native American ancestry have a basis in fact.

President Donald Trump has alleged that Warren, seen as a potential presidential competitor in 2020, used false claims about her heritage to advance her career as a lawyer. He has dubbed Warren the “fake Pocahontas.”

“She used the fact that she was Native American to advance her career,” Trump has said. “Elizabeth Warren is a total fraud. I know it. Other people who work with her know it.”=

“I will give you a million dollars to your favorite charity, paid for by Trump, if you take the test and it shows you’re an Indian,” Trump said in July. “I have a feeling she will say no.”

Warren shared a video and a website of testimonials from her colleagues at Harvard University and elsewhere saying her ancestry had no impact on her hiring. Those testimonials support an investigation done by The Boston Globe which concluded, “At every step of her remarkable rise in the legal profession, the people responsible for hiring her saw her as a white woman.”

Dr. Carlos Bustamante, a professor of genetics at Stanford University, said an analysis of Warren’s genome turned up evidence of Native American ancestry.

“In the senator’s genome, we did find five segments of Native American ancestry, with very high confidence, where we believe the error rate is less than one in 1,000,” Dr. Bustamante says in a video shared by Warren on Twitter.

“This isn’t just about casual racism,” said Warren. “Native communities have faced discrimination, neglect and violence for generations. And Trump can say whatever he wants about me, but mocking Native Americans or any group in order to try and get at me? That’s not what America stands for.” 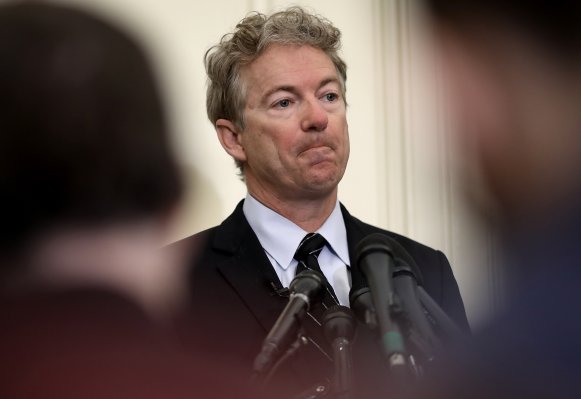 Rand Paul Fears the Political Climate Will Lead to Violence
Next Up: Editor's Pick