(Bloomberg) — North Korea’s economy is in such dire straits that the reclusive nation can’t afford to go back on a promise to Donald Trump to wind down its nuclear program, South Korean President Moon Jae-in said in an interview with Le Figaro.

Speaking to the French daily ahead of a meeting with President Emmanuel Macron, Moon explained why he believes North Korea’s Kim Jong Un will deliver on the pledges made at his historic summit with the U.S. leader in June.

“North Korea’s economy is in huge difficulty due to international sanctions,” Moon said, according to a transcript distributed by his presidential office. “If it breaks the agreement, it will not be able to afford the retribution from the U.S. and the international community.”

While North Korea’s economy has been impoverished for decades, the international community is hungry for news about the impact of the latest round of United Nations sanctions. Last year, the Asian country was estimated to have suffered its biggest economic slump since 1997.

The U.S. wants to keep sanctions against North Korea in place until Kim completely unwinds his nuclear program, while Russia and China have argued against this hardline approach. South Korea has said it would consider easing its own sanctions on its neighbor to forge collaboration on railways and roads, while pledging not to undermine global attempts to punish the north’s weapons development.

Ahead of his European visit, Moon was positive about North Korea’s moves to scale down its weapons program, telling the BBC that Kim’s nuclear pledge “ includes everything” — even giving up his existing arsenal. The South Korean president called on the U.S. to match the north’s efforts with reciprocal measures to push the program forward.

Moon will also emphasize the importance of rewarding the north in his summit with Macron, Yonhap News reported, citing Le Figaro. Trump and Kim signed a vague agreement in June, which included an undefined pledge to “work toward complete denuclearization on the Korean Peninsula.”

Moon is also due to meet Pope Francis on Thursday to deliver Kim’s invitation for the pontiff to visit Pyongyang. 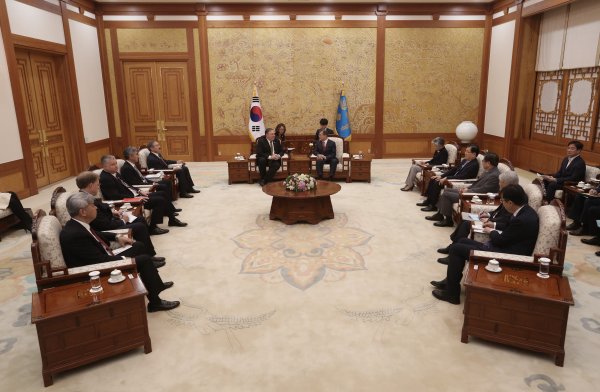