In this July 19, 2018 file photo, Central American men sit in the courtyard of the Asociacion Casa Del Migrante "La Divina Providencia" group house as their laundry dries in San Luis, Sonora, Mexico. Thousands of families and unaccompanied children are continuing to cross the U.S. border in Arizona and California even after learning of the government's family separation policy upon apprehension.
Matt York—AP/REX/Shutterstock
By Toluse Olorunnipa, Tamara Thueringer and Jennifer Epstein / Bloomberg

(Bloomberg) — President Donald Trump said migrant families may think twice about illegally crossing the U.S. border from Mexico if they fear they’ll be separated by the U.S. government, suggesting he’s rethinking a policy abandoned in July after widespread public condemnation.

“We have people trying to come in like never before,” Trump told reporters as he departed the White House on Saturday for a campaign rally in Richmond, Kentucky. “If they feel there will be separation, then they won’t come.”

“I want a lot of people to come in,” but they must do so legally, Trump added.

The Washington Post reported on Friday that the White House was reconsidering a policy known as “zero tolerance” that caused nearly 3,000 children to be taken from their caregivers and placed in federal custody after they were apprehended crossing the border earlier this year.

Members of Congress of both parties criticized the policy, and the plight of the children — held in detention centers run by government contractors for weeks or months apart from their parents or guardians — caused broad outrage among the American public.

Trump issued an order in July to end the practice. But on Saturday, he said some migrant parents wouldn’t risk an illegal border crossing if it meant losing their children.

“If they fear the separation, in many cases they don’t come,” Trump said, adding that some “really bad people” are using others’ children to pose as their own while attempting to enter the country.

“They haven’t known the children for 20 minutes and they grab children and they use them to come into our country,” Trump told reporters, without offering evidence.

Trump spoke about immigration at length during more than an hour of remarks to the crowd of about 6,000 in Kentucky. He focused on so-called “chain migration,” the process by which legal immigrants help foreign-born family members come to the U.S., and the Diversity Immigration Visa Program, often known as the Green Card lottery, a system created by bipartisan support in 1990.

‘Stuck With These People’

“We’re stuck with these people, and I don’t want a chain,” Trump said of some people who’ve come to the U.S. via such family reunification. “I want people to come into our country on a merit-based system.”

Trump said at the White House that he’d accept families crossing together under on a “merit basis,” and said his administration is working on such a policy. He noted that migrants are needed to meet the strong economy’s increased demand for labor.

“Frankly we need people coming in, because we have a lot of companies moving back in, jobs are coming back in,” Trump said. “What I want is merit, I want a lot of people to come in.”

Trump said immigration is a “tricky” issue, and that his comments aren’t being influenced by midterm elections now less than a month away, which will decide which party controls Congress. “You have to do the right thing whether there’s an election or not,” he said.

Among those traveling with Trump on Saturday evening was senior adviser Stephen Miller, the main architect of the administration’s approach on immigration.

With a continued majority in the Senate, Republicans can continue to confirm Republican-nominated judges at a record pace, and change the U.S. court system “forever,” McConnell said. 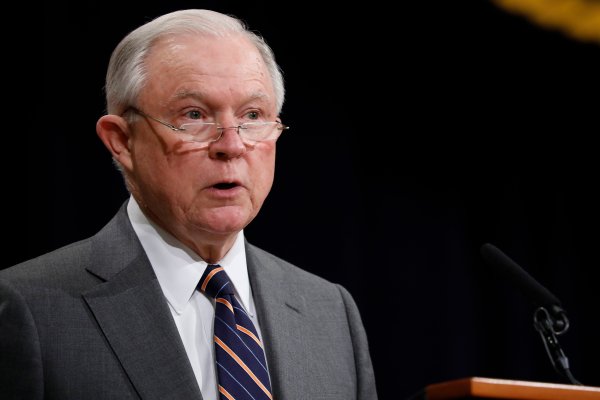