(Bloomberg)—President Donald Trump said the U.S. would be “foolish” to cancel arms deals with Saudi Arabia in response to the controversy surrounding the fate of Washington Post writer Jamal Khashoggi.

At a White House event with U.S. pastor Andrew Brunson, who arrived in Washington after being freed in Turkey, Trump said China and Russia would be ready to swoop in and get the business.

In an excerpt from an interview with “60 Minutes” released earlier today, the president added pressure on the kingdom, vowing “severe punishment” should the kingdom’s leaders be linked to his disappearance. He said the U.S. could take strong measures that he didn’t specify.

“Nobody knows” whether Saudi officials are involved although they “deny it vehemently,” Trump said in an excerpt of the CBS News program taped Thursday and to be broadcast Sunday night. “It’s being looked at very, very strongly. We would be very upset and angry if that was the case.”

“We’re going to get to the bottom of it, and there will be severe punishment,” the president said in the CBS interview. “Could it be them? Yes.”

Khashoggi, a Saudi critic of the regime, hasn’t been seen since he entered the Saudi consulate in Istanbul on Oct. 2 to pick up a document for his upcoming wedding. Turkish officials say they have audio and video recordings that show a Saudi security team detained Khashoggi in the consulate before killing him and dismembering his body, the Post reported. Saudi officials say Khashoggi left the building unharmed.

The affair is eclipsing the three-day Future Investment Initiative, known as “Davos in the Desert,” that is scheduled to start in Riyadh in just two weeks. The event is intended to showcase Prince Mohammed bin Salman’s modernization plan for the desert kingdom.

“What has reportedly happened in Turkey around the disappearance of journalist Jamal Khashoggi, if proved true, would clearly change the ability of any of us in the West to do business with the Saudi government,” said billionaire Richard Branson, who suspended talks with the Saudi Public Investment Fund over a possible stake in his space companies Virgin Galactic and Virgin Orbit. He said he also was suspending his directorships in Saudi Red Sea tourism projects.

Uber Technologies Inc. CEO Dara Khosrowshahi won’t attend “unless a substantially different set of facts emerges.” Several companies including Bloomberg have pulled out of the event as media partners.

U.S. lawmakers have threatened to take action against the kingdom such as blocking arms sales.

In the “60 Minutes” interview, Trump said new actions should not jeopardize the Saudi military equipment contracts held by companies such as Boeing Co., Lockheed Martin Corp. and Raytheon Co., which he said would put jobs at risk.

“I don’t want to hurt jobs. I don’t want to lose an order like that,” he said. “There are other ways of punishing, to use a word that’s a pretty harsh word, but it’s true.”

Trump’s hesitation to strike back at the kingdom reflects close ties the White House has nurtured with the nation’s de facto ruler, the crown prince, and his administration’s acquiescence to other Saudi actions that have drawn international condemnation.

Under Trump, the U.S. has continued to back a Saudi bombing campaign against Houthi rebels in neighboring Yemen that’s killed thousands of civilians, providing American logistical support and weapons.

Part of Prince Mohammed’s plan to overhaul the Saudi economy is an attempt to attract foreign direct investment into the kingdom. In an interview with Bloomberg last week, he said the three-day event would see the sealing of a major investing agreement in the non-oil economy.

“Horrifying things have been reported, and I am horrified. But I have to conduct the business of the IMF in all corners of the world,” Lagarde said in Bali, where the annual IMF meetings are taking place.

It’s not the first time controversy has overshadowed the FII event. Scores of the kingdom’s businessmen, princes and officials were rounded up in the Ritz-Carlton hotel just days after last year’s conference in what the government described as a crackdown on corruption. 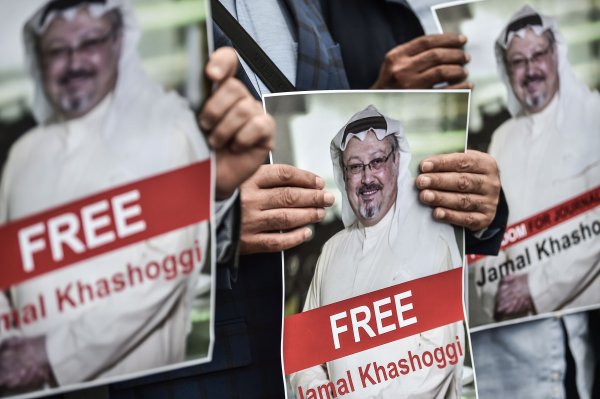 How Iran Benefits From the Fight Over Jamal Khashoggi
Next Up: Editor's Pick