Look for the body in Egypt.

And for Iran in the winner’s circle.

That’s the upshot in the case of Jamal Khashoggi, the Saudi journalist whose disappearance is unfolding as equal parts locked room mystery and Mideast jousting match. A prominent critic of the Saudi leadership and occasional columnist for The Washington Post, Khashoggi was last seen at 1:15 p.m. on Oct. 2, walking into the Kingdom’s consulate in Istanbul to pick up a document necessary for his impending marriage. He never came out. If his fate remains uncertain and basic facts in dispute, that’s because everything about the case — including President Donald Trump’s ambivalence about how to respond — is wrapped up in the notoriously layered politics of the region.

Start with the reality that, while there’s not much of a free press left in Turkey, a steady flow of lurid detail has flowed out of the country since Khashoggi dared to cross the threshold of a diplomatic outpost of the Kingdom he’d fled. Four days later, Turkish officials were declaring that the dissident had been tortured and killed inside the consulate, his body dismembered and the pieces carried out of the country by diplomatic pouch. Three days later we were seeing security footage of a Saudi autopsy expert jetting into Istanbul aboard one of two private flights that arrived that day from Riyadh, and reports that his fellow travelers arrived with a bone saw.

“Maybe we’ll be pleasantly surprised,” President Trump speculated in the White House on Thursday, on Khashoggi’s fate. “But somehow I doubt it.”

The President went on to explain, no less wistfully, that he has no choice but to let the Saudis do as they please, even if that means butchering a U.S. resident (Khashoggi, educated at Indiana State, had permanent resident status). Trump phrased the dilemma in dollar terms: The Saudis have committed to pay U.S. defense contractors $110 billion for weapons, with which it will prosecute its air war in Yemen, the worst humanitarian disaster on the globe. But the defense companies employ Americans. “Jobs,” Trump said.

The real dilemma, of course, is that the Trump administration has gone all-in with the Saudis against Iran. And opposition to Iran is the centerpiece of the President’s Mideast policy. The region may be a mare’s nest of interests, hatreds and difficult history, but Trump is not the first U.S. politician to reduce it to a simple binary: Israel = good, Iran = bad. The rest are Arabs, and confusing.

But so are mysteries. And the one surrounding Khashoggi actually sheds some light on the Middle East.

It helps to know that the leaders of Turkey and Saudi Arabia do not get along. They are not quite rivals, but they really, really disagree about how Muslim nations should be governed. And that tension is why Khashoggi’s disappearance has been so public.

Turkey’s cantankerous President, Recep Tayyip Erdogan, is a big fan of the Muslim Brotherhood. The 100-year-old movement exists to marry Islam with politics. It’s had ups and downs. The Brotherhood breathed pure oxygen during the popular uprisings of the Arab Spring, but has been sucking wind ever since. Erdogan signals solidarity with the embattled group by holding up the four-finger “Rabia” salute, named for the Cairo square where Egyptian forces slaughtered Brotherhood loyalists after overthrowing the democratically elected Brotherhood government in 2013.

Turkish Prime Minister Recep Tayyip Erdogan waves the four finger sign of rabia during a rally of the Justice and Development Party in the Kartal district at the asia side of Istanbul on March 29, 2014.
Ozan Kose—AFP/Getty Images

The House of Saud, an absolute monarchy, loathes the Brotherhood, as well as the elections that threaten to bring them to power. “Actually if you see any terrorist, he used to be in Muslim Brotherhood,” Saudi Crown Prince Mohamad bin Salman told TIME in a March interview. The Saudis enthusiastically supported the coup that deposed the elected Brotherhood government in Egypt, and poured billions into the military government that replaced it. So did the United Arab Emirates, the Saudis’ soul mates in foreign affairs.

So it was not surprising that, of the two private jets that arrived in Istanbul from Saudi Arabia on the day Khashoggi vanished, one stopped, on the way home, in the UAE, which is at least sort of en route to Riyadh. The other swung down in Egypt — which is not on the way at all. That plane was at the Cairo airport, surrounded by pitiless desert, for fewer than 24 hours. That does not mean Khashoggi’s remains were off-loaded there, or that they were on the flight in the first place. It does not even mean the journalist is dead.

But as the private jets left Istanbul, their flight paths traced the webbing of alliances that now limits Trump’s range of motion — from Riyadh, which he honored with his first overseas visit, to the UAE, whose ruler secretly flew to New York to meet Trump after his election, to Egypt, ruled by “a fantastic guy.” Iran is not in the picture, but its gravitational pull is always present — a power that will only increase as its great enemy and rival, Saudi Arabia, takes on the role of barbarous villain.

Khashoggi, however, had nothing to do with with Iran. He advocated for human rights and free speech, the universal rights that have always been under threat in Saudi Arabia, but far more so since the rise of Mohamad bin Salman as its dictator, who took the criticism personally. “Any problem in the Middle East, you will find Iran,” the Crown Prince told us in March. Not this one. 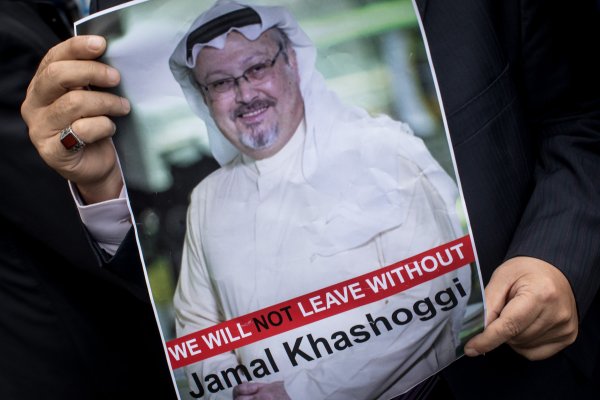