There are two ways of talking about the historical accuracy of First Man, the Damien Chazelle biopic of Apollo 11 commander Neil Armstrong, starring Ryan Gosling: the easy way and the hard way. The hard way is to explore all of the things the movie got right — which is a very, very long list. The easy way is to discuss the things it got wrong, which you could count on one hand — literally.

It is one of the many triumphs of First Man that it tells an exceedingly complicated story of an exceedingly complicated man — a story populated by dozens of other important figures — and does so almost entirely without eliding or streamlining the truth, or worse, inventing things completely. A lot of the credit for that accuracy goes to the diligence of James R. Hansen, the author of the First Man biography, and Josh Singer, who adapted the book for the screen. It says something too that the few mistakes First Man does make are relatively small-bore stuff.

One of those blunders appears early, in the very first moments of the movie, during the scene of a harrowing flight Armstrong took in an X-15 rocket plane in 1961. The scene is true to what happened: Armstrong’s violent ride into the stratosphere, more than 20 miles above the ground, which took a nasty turn when he nearly couldn’t return to Earth as the plane began “ballooning,” or bouncing off the top of the atmosphere rather than slicing back into it. The scene is true too to the claustrophobic look of the X-15 cockpit. What isn’t so true is when we look out the window at the wispy carpet of clouds just below Armstrong’s wings — a lovely enough scene, except that at 120,000 feet, Armstrong was at about twice the altitude at which even the highest clouds form. Minor glitch, surely, except that coming in the film’s opening act, it doesn’t inspire confidence.

The good news is you have to wait a long time to have your confidence shaken even a little again. That happens during the flight of Gemini 8 — Armstrong’s first trip into space, and nearly his last, as the spacecraft spun wildly out of control. This time the problem was in the cockpit, which was rendered with exacting accuracy except for the fact that someone on-set really needed to give it a quick scrub-down first.

All of America’s early spacecraft — Mercury, Gemini, Apollo, the lunar module — were single-use ships. They had never been flown before the day of launch, and would never be flown again. As a result, they all had a certain straight-from-the-showroom look to them. According to Jim Lovell, the commander of Apollo 13, they even had something of a new-car smell. In the movie, however, Gemini 8’s interior has a Millennium Falcon feel, with grime and even a bit of rust on some of its switches. The same is true later when we see the interior of the lunar module in which Armstrong and crew-mate Buzz Aldrin flew down to the lunar surface.

“By the time we got back to Earth, the spacecraft did look pretty dirty,” says Al Worden, command module pilot of the Apollo 15 lunar mission, who was a consultant on the movie. No doubt, but not at the first moments the astronauts strapped in, and certainly not at all for Gemini 8, a mission that had to be aborted early and lasted less than eleven hours from liftoff to splashdown.

The movie strays from the truth too when Armstrong gets the news that he has been tapped to command Apollo 11, and, that if the mission goes as planned, he will become the first man on the moon. Gosling’s reaction — little more than a nod — was probably awfully close to how Armstrong took the news. But how he learned that news was wrong.

Apollo astronauts were assigned to their three-man crews sometimes years in advance. Indeed, in many cases they were on a three-plus-three flight rotation. If you flew on Apollo 8, you would serve as a back-up crew member on Apollo 11, and would return to the cockpit for Apollo 14. What no one knew at the point in the program in which the relevant scene in First Man takes place is exactly what the crews would do on their missions, since every flight was dependent on the success of the previous mission. For the two-plus years leading up to Apollo 11, the betting was that the first moon landing would not come until Apollo 12, 13 or even 14. It was only the surprise success of Apollo 8 — the first lunar orbit, which flew just eight months before Armstrong’s Apollo 11 — that accelerated the program.

Finally, poignantly, there is First Man’s tenderest scene, which takes place on the lunar surface, when Armstrong spends a few minutes alone at a formation called Little West Crater, something he did do in the brief two and a half hours he spent exploring the moon. (Significant spoilers follow.) The most shattering experience in Armstrong’s life, the one from which all of his later-life reserve may have flowed, was the death of his two-year-old daughter, from brain cancer, shortly before he applied to NASA’s astronaut program. In the scene following her death, we see Armstrong open his desk drawer and put away a tiny bracelet that spells out his daughter’s name, Karen, in lettered beads. On the moon, he opens his hand to reveal the bracelet and drops it into the crater, where it will rest forever.

There is no historical record that Armstrong did any such thing, but some signs suggest he did. Astronauts flew with what was known as a PPK, or personal preference kit, which contained any sentimental or otherwise non-regulation items they wanted to bring with them. Those items may have been personal, but the astronauts were required to file a manifest detailing precisely what their PPK contained. Armstrong’s has since gone missing.

“Hansen asked Armstrong for his PPK manifest and he said he lost it,” says Singer, “which was very unlike Neil, who was a pack rat.” Hansen then asked Armstrong’s sister, June, if he might have left something of Karen’s on the moon. Says Singer: “She teared up and said, ‘Oh, I dearly hope so.'”

Audiences could be forgiven for hoping so too. Perhaps the most important item on the long, long list of things First Man gets right is the privately borne pain Armstrong seemed to carry with him his entire life. It would be nice to think that if he found a way to honor that pain, all alone at a spot no human being had ever been before, it at last brought him some much-deserved relief. 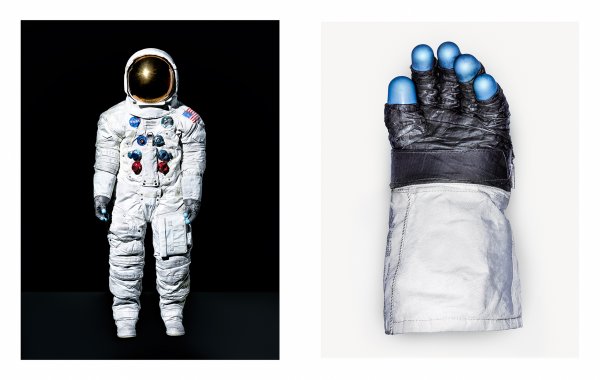 How Neil Armstrong's Moon Spacesuit Was Preserved for Centuries to Come
Next Up: Editor's Pick