Royal or not, all eyes are on the bridal gown at any wedding, and for Princess Eugenie, the design was extra personal.

As she made her grand entrance up the steps at St. George Cathedral on Friday in a sweeping silk gown designed by Peter Pilotto and Christopher De Vos, for her autumn wedding to Jack Brooksbank, the back of her silk dress was low-cut. And it was intentional.

Without a veil, those watching closely could see the long scar up to the nape of her neck.

The Queen’s granddaughter underwent major surgery to treat scoliosis when she was a girl, and she hoped her style statement would inspire those watching.

“I had an operation when I was 12 on my back, and you’ll see on Friday [at the wedding], but it’s a lovely way to honor the people who looked after me and a way of standing up for young people who also go through this,” she told ITV’s This Morning ahead of her big day.

Scoliosis is the sideways curvature of the spine that’s most common to appear during the growth spurt right before puberty.

This is not the first time she’s spoken up about her surgery. It was a “scary prospect for a 12-year-old; I can still vividly remember how nervous I felt,” Eugenie wrote on the website for the Royal National Orthopaedic Hospital, where she was treated.

Eugenie is a patron of the hospital’s charity, and a number of members of the Royal National Orthopaedic Hospital NHS Trust attended the royal wedding, along with representatives from other charities.

Princes Eugenie is ninth in line to the throne following her older sister Princess Beatrice, who took up the maid of honor mantle. Eugenie and Beatrice are daughters of Prince Andrew, the Duke of York, the Queen’s second son and Sarah Ferguson, the Duchess of York; who divorced back in 1996, but remain on good terms and both attended the wedding. 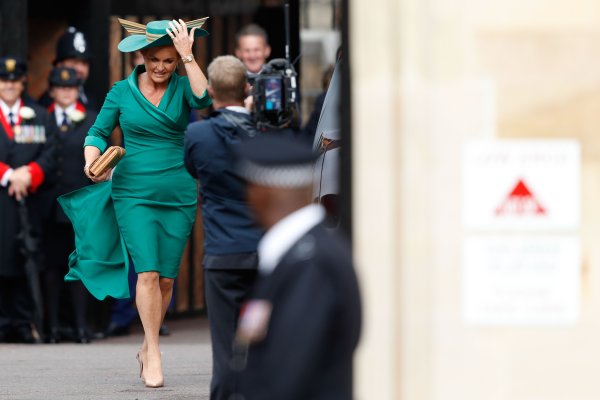 Hold on to Your Fascinator! Windy Windsor Threatens to Ruin the Royal Outfits at Princess Eugenie's Wedding
Next Up: Editor's Pick