'We Will Not Give Up.' Aid Workers in Indonesia Try to Reunite Hundreds of Kids with Families

As Indonesian authorities halt their search for bodies and begin the long recovery from a devastating earthquake and tsunami, humanitarian workers warn that around 300 children who survived the catastrophe remain separated from their families while almost half a million more urgently need assistance.

The 7.5-magnitude quake caused widespread destruction in the city of Palu, where the powerful temblor set off tidal waves and a dangerous phenomenon called liquefaction. At least 2,073 people have been confirmed dead and as many as 5,000 others are believed to be missing. More than 80,000 were displaced.

In the chaos that ensued, an estimated 300 children across affected areas were left either separated from their parents or unaccompanied by any adult relatives, according to the U.N. children’s agency, UNICEF. Although 74 children have been officially registered with the organization as missing, UNICEF Indonesia has partnered with a local branch of Save the Children, the country’s Ministry of Social Affairs, local police and a few smaller organizations to pool information about families that have been torn apart.

Read more: Indonesia Winds Down Search for Victims of Devastating Earthquake and Tsunami

As of Friday, just five registered cases of separated or unaccompanied children have resulted in reunification, while another is expected to be reunited soon, according to Save the Children. Akbar Halim, a child protection specialist for UNICEF Indonesia, said success is hard to measure when it comes to bringing fractured families back together in the wake of a disaster. “The numbers don’t really matter,” he told TIME, “I always tell people, ‘We can’t guarantee that we’ll bring back your child, but we’ll do the best we can.'”

But low awareness is a chronic challenge; many families in the remote region do not know how to go about reporting the loss of their loved ones. Some were seen driving around the city with cardboard signs strung to their backs bearing the names of their relatives in hopes they would be spotted.

There have been additional accounts of strangers taking in unaccompanied children and claiming them as their own. While such “illegal adoptions” are often well-intentioned, child protection experts say they make family reunions extremely difficult to facilitate.

Aid workers have received reports that some groups of children have been taken by boat to the city of Balikpapan, in the neighboring island of Borneo, or by road to Sulawesi’s capital Makassar.

“We are concerned about human trafficking,” Muhammad Zubedy Koteng, a child protection specialist for Save the Children’s local partner Yayasan Sayangi Tunas Cilik, told TIME in Palu. He also estimated that hundreds of children were without their parents, but conceded that “there could be more.”

UNICEF estimates about 475,000 children in total have been affected by the disaster, and has launched an appeal for $26.6 million to provide for their safety. “Our utmost priority at the moment is to ensure that children receive life-saving support in the form of health and water and sanitation, nutrition and child protection services,” said UNICEF Indonesia representative Debora Comini. Much of the city still lacks power and clean water, and many of the displaced are living in open-air camps while they await new shelter. 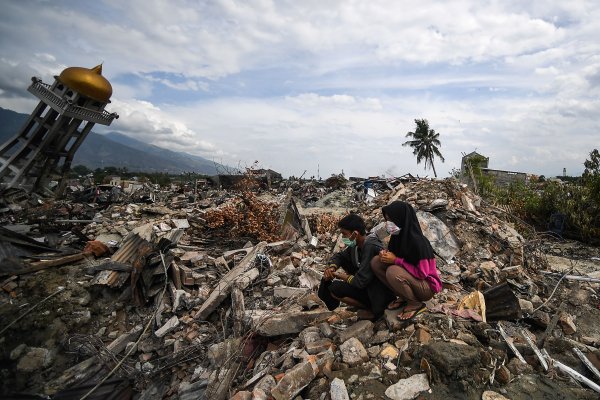 Indonesia Ends Search for Tsunami Victims
Next Up: Editor's Pick