Late Thursday, the Washington Post reported Turkish authorities had video and audio evidence that Khashoggi had been murdered and his body dismembered shortly after entering the consulate. “You can hear how he was interrogated, tortured and then murdered,” a source told the Post, where Khashoggi had a column he regularly used to write about the Saudi leadership.

The details of what really happened are still murky, but if his murder is confirmed, it may have grave consequences for Saudi Arabia’s position in the world. The kingdom is a key regional ally for the U.S. and a highly-valued trading partner — and the alliance has strengthened under President Donald Trump.

Charles W. Freeman Jr. was the U.S. ambassador to Saudi Arabia from 1990-1992, during the the First Gulf War. He knew Jamal Khashoggi, and currently serves as a lifetime director at the Atlantic Council.

He spoke to TIME on Thursday about Khashoggi’s disappearance.

Can you tell me a little about your relationship with Khashoggi?

I was the ambassador to Saudi Arabia during the Gulf War. He was a journalist. I can’t say we were very close friends, but we were acquaintances. I’ve always had great respect for his patriotism, and also for his integrity – his willingness to say things that needed to be said, that sought to improve his country rather than excuse it. I think that’s an expression of patriotism and character to be admired.

If his murder is confirmed, what would it mean for relations between Saudi Arabia and the U.S.?

At this point we have allegations from a notoriously unreliable source, the government of Recep Tayyip Erdogan in Turkey. We have to bear in mind that we don’t know, really, what happened. I think we are entitled to suppose the worst, but we don’t know for sure whether Jamal Khashoggi is alive or dead, and we have no idea where he is if he is alive.

Will this incident erode these global norms even further?

Very definitely. The Middle East pioneered a lapse in global standards, which I am sorry to say the U.S. has been very much a part of. There’s been a process since the end of the Cold War of a pretty rapid deterioration of the previously-established norms. You can see why, because those who are on the other side, the Taliban or insurgents in Iraq, these are not people of any great account at global councils. They have no way of fighting back except through terrorism, which immediately discredits them. And there are no consequences. Whereas during the Cold War there were consequences, and restraints, because you were flirting with nuclear escalation. So morality had some force behind it. It doesn’t really have it now.

What do you think the U.S. response should be?

Once the facts are established, Congress and the President should engage in consultations about what should be done. I think it should begin with a serious warning and a discussion with the Saudis about why this sort of thing is counterproductive and unacceptable, and will lead to retaliatory measures.

Questions of morality and legality aside, in foreign policy terms, for the Saudi monarchy, this appears to be worse than a crime; it is an unforgivably self-destructive blunder.

Do you think smaller countries, like the U.K., who trade heavily with Saudi Arabia, are going to be willing to take steps in response?

Here we come to the various points of leverage that the Saudis have, and the reasons for British and American caution in dealing with the Saudis, which are grounded not in shared values but in self-interest. To begin with, the British and to a lesser extent the American defense-industrial basis depend heavily on sales to Saudi Arabia of defense equipment. Production lines would shut down if there were an interruption in existing sales. They would shut down if there was no prospect of future sales.

A huge number of jobs in the major economies, like the U.K. and U.S., depend on Saudi Arabia remaining a customer. Secondly, the Saudis are a prime source of human intelligence on the terrorists who have the U.S. in their sights. That is not a replaceable resource. An interruption in intelligence cooperation could greatly increase the risk to the homeland.

How would U.S. sanctions impact the war in Yemen?

Logistical support is vital to the Saudi ability to continue the war in Yemen. I think it would bring it to a fairly rapid lower level of combat. The war itself has been from the outset a travesty of statecraft, in the sense that you shouldn’t start a war without some idea of how you’re going to end it. You can’t change, or in this case restore, a regime from the air. The major part of the war has been from the air.

Do you think Khashoggi’s disappearance could be seen as an act of war?

Wars are started on these grounds. Think of the Barbary pirates. It’s certainly a gross violation of diplomatic norms to abduct people from consular premises. It’s even worse to murder them in such premises and assert immunity. In the end, what is an act of war or not is determined by politicians. Mr. Trump will determine what he does, when he’s put in the position of having to recognize that a terrible crime has been committed. 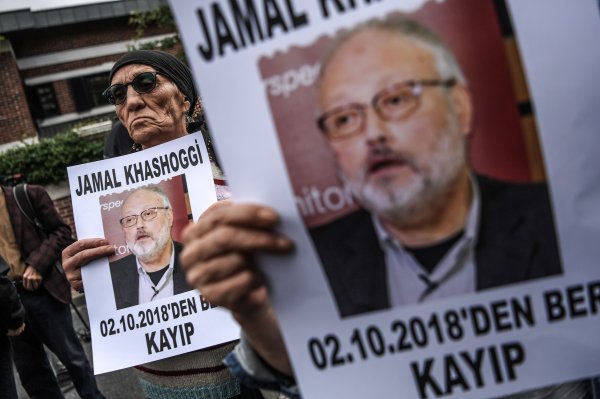