More than a 1,000 rangers have been killed in line of duty over the past decade protecting elephants, rhinos and other endangered animals. But punishment for illegal wildlife trade is still not harsh enough, warned Prince William on Thursday.

“Lawmakers and judges must make sure the penalties are higher than the rewards,” the Duke of Cambridge said during his opening speech at the 2018 Illegal Wildlife Trade conference in London. The international event, which spans two days, builds on the success of the U.K. summit in 2014, when 42 countries signed a joint declaration to tackle a crime that sees thousands of animals at risk of extinction killed each year.

Prince William said he feared that by the time his children, George, 5, Charlotte, 3, and Louis, 5 months, reach their 20s, elephants, rhinos and tigers will all cease to exist in the wild. “I, for one, am not willing to look my children in the eye and say that we were the generation that let this happen,” he said.

But it is not easy to stop organized poachers, he admitted: “They are the same groups who move drugs, people and weapons. These systems are sophisticated, co-ordinated and adaptable and professional. They innovate faster than we can and exploit weaknesses in our system.”

Rather than prioritize illegal wildlife trade over combatting people trafficking and weapons and drugs smuggling, Prince William urged governments to acknowledge the link between the crimes. He said reducing the shipment of drugs and guns across national borders would also reduce wildlife trafficking.

He also asked listeners to not leave the task for the “thinly stretched” wildlife officers: “You might find it easier to arrest a kingpin or a middle man for trafficking illegal wildlife products than to catch him red-handed smuggling heroin. Remember, Al Capone was convicted of tax evasion, not murder.”

UK. Foreign Secretary Jeremy Hunt, estimated the illegal wildlife trade to be the fourth-most profitable criminal enterprise in the world. “Forty years ago Africa had 1.3 million elephants, today it is down by two-thirds to just over 400,000,” Hunt added.

But it was not all doom and gloom. Prince William said accomplishments around the world since the agreement should be celebrated: “The price of ivory has fallen by a staggering 75%; 19 African range states now stand united through the Elephant Protection Initiative to protect their elephant populations and put ivory beyond economic use.”

Although large steps have been taken, the prince believes conservation and environmentalists should think beyond “quick wins” as the fight will never be complete to ensure “human and wildlife live together without conflict.” 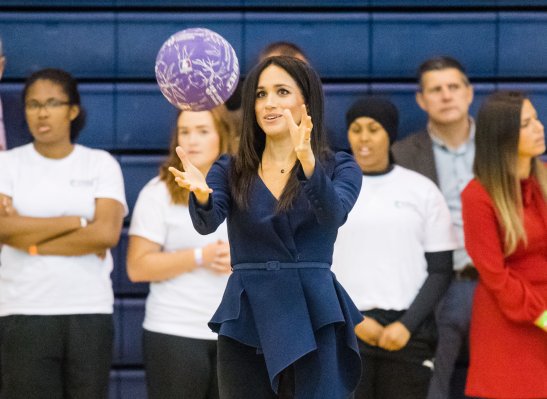 Meghan Markle and Prince Harry Were Total Sports at Event
Next Up: Editor's Pick