Italy Puts Itself on a Collision Course With E.U. Leadership

Jean-Claude Juncker, President of the European Commission, arrives at an informal summit of leaders of the European Union on September 19, 2018 in Salzburg, Austria. High on the agenda of the two-day summit is migration policy.
Sean Gallup—Getty Images
By Ian Bremmer

Populist political parties have made big gains in a number of European countries in recent years, but Italy is the first large euro-zone economy where a government openly hostile to the E.U. has taken charge. The coalition in power there, the Five Star Movement (5SM) and the League, is in office at least in part because it’s willing to blame Brussels for many of the country’s current problems. The latest face-off is over the content of Italy’s national budget.

The European Commission, the executive body of the E.U., wants Italy to keep its debt under control as part of fiscal rules governing every country that uses the euro. The Italian government wants a looser budget because 5SM wants to spend money on a “guaranteed basic income” scheme popular in Italy’s poorer southern provinces, and the League–led by powerful Deputy Prime Minister Matteo Salvini–wants to give wealthier northern supporters a tax cut. Italy’s national debt is already 131% of GDP, the second highest level in the euro zone after Greece. But unlike those in Greece, Italy’s banks are “too big to bail.”

In many ways, Italy’s government poses a more dangerous problem for Europe than Brexit does. The E.U. and U.K. have incentives to work toward a deal–though both have good reasons to want to take their time getting there. By contrast, Italy’s government and Salvini in particular gain an advantage at home by fighting with the E.U. whenever possible.

This fight is heating up. On Oct. 2, the Italian government doubled down on a budget that would raise its deficit target so it can spend more money over the next three years, and European Commission President Jean-Claude Juncker responded with pointed criticism. The result? Investors grew more concerned that Italy is on an unsustainable financial path. The spread between Italy’s benchmark bonds and their German equivalent surged, making it more expensive for Italy to borrow money. Salvini then threatened to seek damages “from those who want to harm Italy.”

The European Commission leadership can’t agree on how hard to push the Italian government. The confusion is understandable. If it tries to “veto” the budget by asking Italy to submit a new one, it plays directly into the hands of Salvini, a man who has built a growing political reputation as defender of his country’s interests against the alleged bureaucratic bullying of E.U. officials. A sharp response from Brussels would also help Salvini make the case on behalf of the anti-E.U. coalition running in European Parliament elections in 2019.

But if the E.U.’s executive isn’t firm with Italy, it will signal that it lacks the strength and will to enforce euro-zone rules encouraging responsible state spending. That, in turn, would feed suspicions across Europe, particularly in the continent’s economic engine of Germany, that taxpayers in one country should no longer pay into plans that can be used to bail out governments of other countries that refuse to approve responsible budgets.

The two sides are now heading toward their most serious confrontation yet. The European Commission may well insist, for the first time in its history, that Italy submit a new budget. Salvini’s criticism and threats have only made that more likely. If so, the Italian government may decide to simply ignore the request from Brussels or even to explicitly say no.

This isn’t just a fight about money. It’s a test of whether a populist government can successfully defy the rules that hold Europe together. If it can, we’ll learn more about the credibility and future of the E.U. and its structures than we have at any point before.

Most Popular on TIME
1
‘You Bet Your Ass I've Got Regrets.’ As Election Day Nears, More of Trump’s Former Officials Are Speaking Out Against Him
2
Everything You Need to Know About Nurse Ratched Before Watching the New Netflix Show
3
Donald Trump's Health Care Orders Lack Teeth 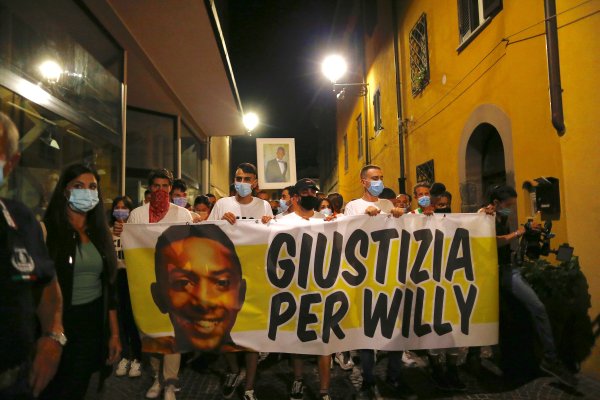