On Oct. 4, a young Indian writer by the name of Mahima Kukreja tweeted that a popular, Mumbai-based comedian, Utsav Chakraborty, had once sent her an unsolicited photo of his penis. Other women responded by sharing stories of similar behavior from Chakraborty and Kukreja began tweeting screenshots of the messages she received (while blurring out the names of the accusers). She kicked off a firestorm.

By the time Chakraborty apologized a day later, scores of Indian women — many of them journalists — had taken to Twitter to detail their experiences of sexual harassment and violation at the hands of senior figures in the media and entertainment industries and, in one case, a government official. The repercussions in recent days have included public apologies, resignations, and the sudden closure of a prominent Bollywood production house after one of its co-founders was accused of sexual assault.

Almost a year after the allegations against Harvey Weinstein were revealed, the #MeToo movement has come to India in force. It has been a slow build up. In 2017, Raya Sarkar, a law student, compiled a list of alleged sexual harassers in academia, and earlier this year actress Sri Reddy stripped half-naked to protest sexual harassment in Bollywood. Then, in September, actress Tanushree Dutta accused film veteran Nana Patekar of misconduct with her on a film set in 2008. (Patekar has denied the allegation; Dutta has filed a police complaint.) The case sparked an outpouring of other #MeToo allegations on social media. Now Kukreja’s tweet has started a fresh wave and prompted the compilation of a list — consolidated from stories across social media platforms and shared as a Google spreadsheet — with more than 80 men on it, many of them prominent.

“I wish there was a nicer way to drive the point home for men but they don’t listen,” says Bengaluru-based journalist Sandhya Menon, who took to Twitter in Kukreja’s wake to accuse three different editors at leading daily papers of touching her, texting her inappropriate comments, and forcibly kissing her when she worked with them in the past. (The latter editor, Gautam Adhikari, told TIME that he had “no recollection at all of these incidents from many years ago.” The first two have, respectively, gone on administrative leave and kept silent.)

Indian Bollywood actor Nana Patekar is mobbed by the media as he leaves after making a statement outside his home in Mumbai on October 8, 2018. Actress Tanushree Dutta, whose recent public account of alleged sexual harassment by Patekar has sparked an outpouring of similar #MeToo accounts across the country, has filed a formal complaint.
AFP/Getty Images

Both in terms of the the numbers of men being publicly accused, and their willingness to apologize, India has seen nothing comparable to #MeToo. This, after all, is a country where women who rebuff unwanted advances are often assaulted, raped, or have acid thrown in their faces. Frequent victim-shaming, deeply rooted chauvinism, and an infamously inefficient legal system usually deter women from naming perpetrators. The 39% spike in recorded crimes against women between 2012 and 2016 (when they totaled 338,954) could be attributed to more women being willing to come forward, but it remains the case that most sexual assault cases go unreported.

Things have been slowly changing, however. There have been isolated, though important, instances of women taking workplace harassers to court; one, involving the former head of the U.N.’s Intergovernmental Panel on Climate Change, could prove to be a watershed case. The brutal 2012 Delhi gang rape and murder, and the rape and murder of an eight-year-old girl in Kashmir in early 2018, also brought huge numbers of women onto the streets in protest and put the threats faced by Indian women into the global spotlight.

The global #MeToo movement has now built on that momentum by giving more Indian women the courage to name names. Besides journalists and actors, other professional groups, such as lawyers, are starting their own campaigns.

“There are many vocal women on Twitter and over the last six months they’ve created this atmosphere where people feel there is a chance of being believed,” Menon tells TIME.

‘We’re tired of holding it in’

Responses from several companies and organizations has been swift, especially from newsrooms, where many instances of sexually inappropriate behavior are alleged to have taken place. The Times of India, Quint and the Hindustan Times have set up internal investigations, while HuffPost India has voiced its support for women accusing two former employees of inappropriate conduct. Prashant Jha, a bureau chief at the Hindustan Times, stepped down after allegations were made against him and Mayank Jain, a reporter with Business Standard, resigned after being accused.

The Hindustan Times also announced it would hold mandatory weekly workshops on sexual harassment. All of this represents a seismic shift in media workplace attitudes. As recently as 2013, a managing editor was accused of trying to downplay sexual assault accusations made against a senior journalist at the publication Tehelka. (That editor vigorously denies any attempted hush-up and the journalist is currently facing trial.)

The upcoming Mumbai Film Festival has meanwhile announced that it will not show films involving some of the men who have been accused in recent days, while streaming service Hotstar has cancelled the production of a new season of the show On Air with AIB — the comedy group with which Chakraborty was associated.

But for many Indian women, #MeToo is less about seeking redress — and certainly not legal redress, given the legal logjams overwhelming India’s courts — so much as relieving years of pent-up emotion.

“We are tired of holding it in,” says Divya Kartikeyan, a journalist in Chennai. Describing #MeToo as “a full body experience of collective healing,” she has been collating information from women about their experiences of sexual harassment. The incidents being shared range from sexually-colored conversations — such as suggestions of renting a room for a day and asking about the “wildest sexual thing” the woman has done — to alleged groping, assault, and rape.

One of the most high profile men to be accused is M.J. Akbar, the current minister of state for external affairs and a former journalist. Multiple women have come on record to accuse Akbar of harassment and inappropriate behavior. He has not commented on the allegations and an official from the Ministry of External Affairs said it had no comment when contacted by TIME.

Another prominent name is Chetan Bhagat, a leading author who featured on the TIME 100 list in 2010. Screenshots of inappropriate messages sent by Bhagat to a woman some years ago have been shared on social media. Bhagat did not respond to TIME’s email but has verified the messages in a Facebook post, in which he also apologized, saying “I should have had better judgement.”

That is what many Indian women are now demanding of their male colleagues and acquaintances. “I expect men to reflect and figure out what is wrong. I’m happy to help but if you come from a place of wanting to challenge, rather than wanting to know, that isn’t going to help,” Menon says.

Ultimately, though, neither judgement nor reflection are considered enough. “The most important part of an apology is change in behavior,” Menon adds. “I’d like to see that and reserve my judgement until then.” 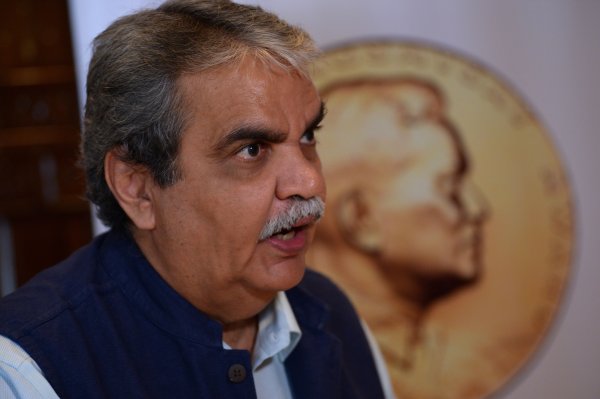 A Top Psychiatrist Reflects on World Mental Health Day
Next Up: Editor's Pick