The Mystery of Dark Matter: WIMPS May Have the Answer

At the heart of our galaxy, the WIMPS are at war
Pete Saloutos; Getty Images/Image Source
By Michael D. Lemonick

It’s a mystery that has haunted astronomers for nearly 80 years now: what is the mysterious dark matter that outweighs ordinary matter—all of the atoms that make up stars, galaxies and clouds in the cosmos—by a factor of four to one? We know with near-certainty that it’s out there because of its powerful gravity. Galaxies spin so fast that they’d fly apart without the massive cocoon of dark matter that surrounds them, pervades them and holds them together.

It’s not that theorists are at a loss for what the dark matter might be: the smart money says it’s a still-undiscovered type of elementary particle, produced in gigantic quantities in the immediate aftermath of the Big Bang. So far, however, despite decades of trying, nobody has managed to find anything more than a circumstantial case to back up this notion.

But that may be changing. A team of astrophysicists from a half-dozen top-tier universities and labs say they have evidence from the orbiting Fermi Large Area Telescope that some of the gamma rays emanating from the core of the Milky Way could be produced by dark matter particles colliding with and annihilating one another. The authors acknowledge that plenty of astrophysical processes generate gamma rays, but when you add up all of those known sources, says co-author Dan Hooper, of the Fermi National Accelerator Laboratory, near Chicago, “there’s a significant excess we can’t explain.” And while that’s far from a smoking gun, dark-matter particles are at the very least a plausible explanation.

Here’s the reasoning: based on their understanding of the Big Bang and what came out of it, physicists are convinced dark matter can’t be made of ordinary quarks, electrons and other standard particles. It has to be something else, and what fits the bill best is a type of particle that responds to only two of the four basic forces of nature—gravity and the weak nuclear force, to be specific. (The other two are the strong force and electromagnetism.)

These bits of exotic stuff, known generically as weakly interacting massive particles (or WIMPs, and yes, it’s deliberately cute), could come in matter and antimatter versions, like many particles do. Or they could be their own antiparticles, which is permitted by the laws of physics. Either way, if they approached each other closely (as they would in the densely packed heart of the Milky Way), they would annihilate each other, sending out, among other things, a burst of gamma rays that the Fermi telescope could detect.

Not only have gamma rays been spotted, the precise levels the Fermi telescope has detected are just what you’d expect if some of that radiation really is produced by WIMPS engaging in mutual destruction. But that’s where things start to get tricky. Astrophysicists think they know how many gamma rays should be coming from other sources—ordinary particles slamming into other particles, or bursts of energy from the ultra dense stellar corpses known as pulsars—but they’re not certain.

“We believe we understand these things,” says Harvard astrophysicist Doug Finkbeiner, another author, “but there’s always room to make a mistake.” So the new signals could be the result of dark matter, he says, or they could be caused by pulsars making more gamma rays than astronomers think. “Dark-matter people want it to be dark matter,” says Finkbeiner, “but pulsar people want it to be pulsars. And it could also be none of the above, something we haven’t thought of yet.”

Hooper agrees, but he puts a bit more of a positive spin on it. “We’re claiming the detection of anomalous gamma rays, and no more,” he says. “But I haven’t seen any explanations other than dark matter that hold water at this point. This is the first time I’m willing to move from ‘it looks like it might be the signal of dark matter’ to ‘it looks like it is the signal of dark matter,’ and that’s qualitatively different.”

The final verdict won’t be in for some time, though. One way the mystery might be resolved is simply through longer and more thorough observations with the Fermi telescope. “We have only four years’ worth of data,” says Hooper, “but with more time we should have a better sense of what we’re seeing.”

Another way might be via the Large Hadron Collider, which made headlines in 2012 when it found the Higgs Boson, and which has now turned its attention to finding WIMPS, among other things. The nature of dark matter could also be confirmed by one of the underground particle detectors hoping to snag a passing WIMP as it zips through the Earth. Or, it might come from an instrument called the Alpha Magnetic Spectrometer, riding aboard the International Space Station. One way or another, however—unless astrophysicists have been pursuing a total dead end for the past couple of decades, that is—a mystery that has dogged science since Franklin Roosevelt occupied the White House may finally be on the verge of a solution. 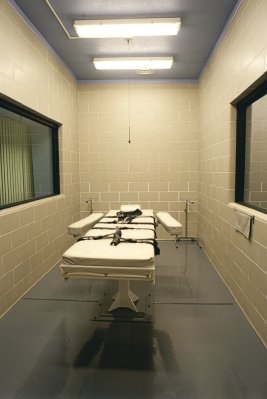 Why Southerners on Death Row Are More Polite
Next Up: Editor's Pick