Indonesia Winds Down Search for Victims of Devastating Earthquake and Tsunami

The official search for casualties of a devastating earthquake and tsunami on the Indonesian island of Sulawesi began winding down on Thursday, as authorities prioritize support for the living nearly two weeks after the disaster.

At least 2,045 people have been confirmed dead and as many as 5,000 others are believed to be missing after a 7.5-magnitude earthquake struck the coast of one of the Southeast Asian archipelago’s largest islands on Sept. 28.

Authorities said this week there is little chance of finding anyone alive, and any bodies unearthed will likely be decayed beyond identification. Public health is also a concern, as bodies entombed under mud and debris could carry disease.

Official efforts will shift focus to providing for more than 80,000 people displaced and at least 10,000 injured by the disaster. The city of Palu was hardest hit by the quake, tsunami and a phenomenon called liquefaction, whereby underground water and silt were churned into mud that swallowed entire settlements.

The Baiturrahman mosque is seen after being hit by the earthquake and tsunami in the city of Palu, Central Sulawesi, Indonesia on Oct. 2 2018.
Eko Siswono Toyudho—Anadolu Agency/Getty Images

At least two of the worst-hit neighborhoods, Petobo and Balaroa, will be closed off and designated as mass graves. Indonesia’s National Board for Disaster Management has said debris will be cleared and the sites will eventually be turned into parks and monuments.

“People are traumatized. They don’t want to go back,” disaster agency chief Sutopo Purwo Nugroho said at a news conference in the capital Jakarta on Wednesday, according to the Associated Press. “They asked to be relocated to another place and a house made for them.”

While families have identified some of the dead, hundreds of unclaimed corpses were buried in another mass grave in Poboya, on a mountain to the city’s east. As more bodies were discovered each day, they were urgently buried to prevent disease and comply with Islamic tradition of immediate burial.

Indonesia is the world’s most populous Muslim-majority nation, though Sulawesi also has a sizable population of Protestant Christians.

Indonesian authorities have come under criticism for their lack of preparedness. Detection buoys off the coast of Sulawesi had not been operational since 2012, and many residents had little awareness about the risks of tsunamis and liquefaction, though authorities knew of the dangers specific to the island.

Willem de Lange, an earth scientist at the University of Waikato in New Zealand, told TIME that authorities “could have done more to prepare, and hopefully will do so before the next event, which we expect to be within 20 to 30 years.”

Indonesia is prone to disaster, situated on one of the most seismically active parts of the world known as the Pacific “Ring of Fire.” Roughly 81% of the most powerful earthquakes ever recorded happened along the volatile strip.

On Thursday morning, a 6.0-magnitude quake struck near the islands of Java and Bali, killing three people. In early August, a series of quakes on the island of Lombok left more than 500 dead.

In 2004, an earthquake and tsunami in the Indian Ocean left more than 227,000 people dead or missing in 14 countries, more than half of them on Indonesia’s westernmost island of Sumatra. 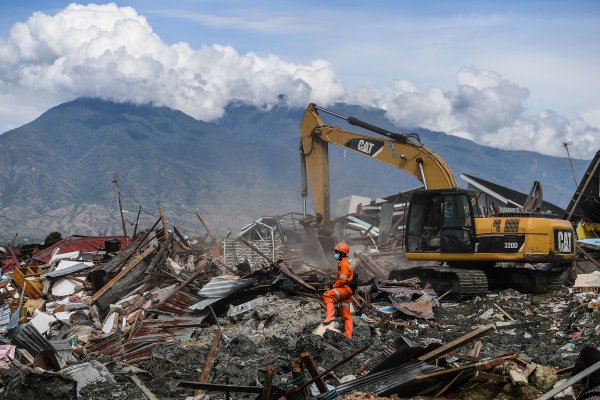 After Indonesia, Experts Warn of More Deadly Disasters
Next Up: Editor's Pick