Hurricane Michael Is the Third Most Powerful Storm to Ever Hit the U.S. Mainland

Hurricane Michael made landfall in Mexico Beach, Fla. on Wednesday with sustained winds of 155 miles per hour. That put it just shy of a Category 5 hurricane, which would require wind speeds of 157 mph, but Michael is nevertheless one of the strongest storms to ever strike the American mainland.

Michael was continuing to intensify even as it made landfall Wednesday, an unusual phenomenon that surprised some experts. Hurricanes typically lose power as they move inland away from the warm waters that fuel them and encounter less favorable wind conditions.

“I think that if people are comparing storms, what was really fascinating was that it was still intensifying when it was making landfall, which is similar to Hurricane Camille also intensifying as it moved inland,” says AccuWeather Senior Meteorologist Dan Kottlowski. “Other storms like Hurricane Opal in 1995 actually went from a Category 4 to 3, just like most storms that make landfall on the Gulf Coast tend to weaken.”

There are several ways to measure a hurricane’s strength. The most recognizable measurement, the Saffir-Simpson Hurricane Wind Scale, rates hurricanes from 1-5 based on their sustained wind speeds. But hurricanes can also be measured by their barometric pressure: generally speaking, the lower the pressure, the more intense the storm. And so far, Hurricane Michael’s pressure ranks as the third-lowest for any hurricane to strike the U.S. mainland, at 919 millibars. The only storms with lower pressure were Hurricane Camille in 1969, and the unnamed Labor Day hurricane of 1935.

But Kottlowski noted that meteorologists are still analyzing Hurricane Michael, and it’s possible that it will be retroactively upgraded to Category 5 status based on wind speeds.

“That’s what happened with Hurricane Andrew — [the National Hurricane Center] looked at the pressure and reanalyzed and upgraded it to a Category 5 storm. It was very close. I think it’s possible that it will happen with Michael. It was only two miles per hour slower than a Category 5. They’ll do a thorough reanalysis of the data … but it’ll take two to three months at least until the final report.”

Regardless of Hurricane Michael’s ultimate classification, those in the path of the storm are facing life-threatening winds, storm surge and other dangerous conditions. The NHC said Michael could cause a storm surge of up to 14 feet, for instance.

“Storm surge will be the most damaging aspect of the storm,” says Kottlowski. “A lot of places on video showed houses under water. We’re seeing up to nine feet of inundation in parts of Apalachicola, Florida, and that wasn’t even where Michael made landfall.” 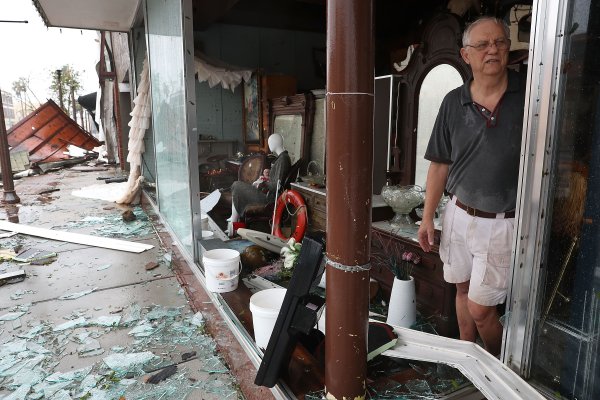 'A Whole House is Gone.' Videos Show the Devastation Caused by Hurricane Michael
Next Up: Editor's Pick