Is Health Care a Sleeper Issue in the Midterm Elections?

President Donald Trump has all but put himself on the ballot this November, dominating the news with a brutal confirmation fight over a Supreme Court justice, renegotiation of a trade pact with Mexico and Canada and inflammatory comments at rallies and in TV interviews.

But Democrats see a potential opening in an issue that’s dropped off the radar: health care.

In remarks on the Senate floor this week, a number of Democratic lawmakers sought to highlight health care during a debate over a failed Republican proposal to expand short-term health care plans that don’t cover pre-existing conditions, which they call “junk plans.”

“In November, the American people will have a golden opportunity to move our country in a dramatically different direction, by voting for Democratic candidates who will work to improve our health care rather than so many of those Republicans candidates who in obeisance to the big insurance companies, work to destroy it,” said Minority Leader Chuck Schumer.

That vote on the resolution, which was introduced by Wisconsin Sen. Tammy Baldwin, failed almost completely along party lines on Wednesday. Maine Senator Susan Collins, who recently made waves as the deciding vote to confirm Kavanaugh, was the only Republican to buck party and vote to overturn the expansion. (There is also a pending lawsuit on these plans in the District of Columbia).

The vote was only the latest time that Democrats attempted to turn the conversation toward health care.

Schumer tried to coerce Senate Majority Leader Mitch McConnell to focus on health care last summer after McConnell cancelled the August recess, to no avail. An analysis of Kantar Media/CMAG advertising data by the Wall Street Journal from Jan. 1 through Sept. 30 found that nearly half of all Democratic advertisements mentioned health care, in comparison with just 21 percent of Republican advertisements. In swing districts, that number was even more stark, with only three Republicans running ads.

A big reason for Democrats is that they believe they are winning on the issue.

Polls shows support for the Affordable Care Act, particularly the provision regarding preexisting conditions. A poll from the Kaiser Family Foundation released last month found that 75 percent of those surveyed said it was “very important” to ensure coverage for people with such conditions.

There are also some signs that Republican candidates are rallying around positions that are the opposite of their potential future Senate colleagues. In Missouri, for instance, Republican Senate candidate, Attorney General Josh Hawley, who is among the group of attorneys general suing to invalidate the Affordable Care Act, ran an advertisement saying he supported forcing insurance companies to include coverage for preexisting conditions.

President Trump took the rare step of publishing an op-ed in USA Today slamming universal medicare proposals, or Medicare for All, as an extremist proposal fashioned by progressive Democrats. (The Washington Post’s fact checker later noted that “almost every sentence contained a misleading statement or a falsehood.”

As a result, Democratic lawmakers seemed confident that a heightened focus on this issue can cement any advantages they already have in an election season where Republicans are facing an uphill battle, even if their strategists and party leaders are touting a boost from Brett Kavanaugh’s confirmation as a Supreme Court justice. This, their thinking goes, is what voters really care about.

“A week doesn’t go by when I’m back in New Hampshire and somebody approaches me to ask what the status of health care legislations and health care protections is,” New Hampshire Sen. Maggie Hassan told reporters on Wednesday. “Today, in this vote, they [Republicans] made it very clear they will side with insurance plans.”

“When I talk with people in New Hampshire they understand the difference,” Hassan continued. “They understand that Democrats have been standing with them and demanding access to healthcare for everybody.”

But Republican Sen. Richard Shelby said that health care may not be as much of a winner as Democrats think, noting that some Senate races have begun trending in the GOP’s direction since the Kavanaugh fight.

“We won’t know until things happen,” he told TIME. “But we’re going to have some competitive races.” 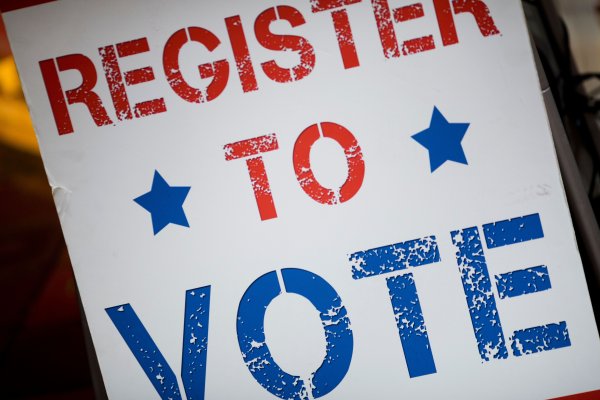 2018 Midterms: Record Number of Voters Registered on Holiday
Next Up: Editor's Pick