Even The Weather Channel Crew Tried to Evacuate During Hurricane Michael. Then They Changed Their Minds

A crew from The Weather Channel attempted to evacuate their post in Florida as Hurricane Michael approached on Wednesday — but even they deemed it too dangerous to leave.

The Weather Channel meteorologist Mike Bettes tweeted Wednesday morning that he and his crew were going to evacuate their home base in Apalachicola, Florida, one of the areas expected to be hit hardest by what’s been called the “monstrous” storm.

“We feel confident in the building we’re staying in is strong but not confident that US 98 will be in tact and an escape route for us after the hurricane,” Bettes wrote.

About an hour later, Bettes reported a change of plans.

“Wx is too bad to drive now,” he wrote. “Our crew will be staying put in Apalachicola. We have sturdy shelter, are a good distance from the water, and have a lot of supplies.”

Hurricane Michael, currently making landfall in Florida as a powerful Category 4 storm, could be “the worst storm that the Florida Panhandle has seen in more than 100 years,” Florida Gov. Rick Scott warned. The hurricane is expected to bring sustained winds of more than 145 mph and storm surge of up to 14 feet, according to the National Hurricane Center. 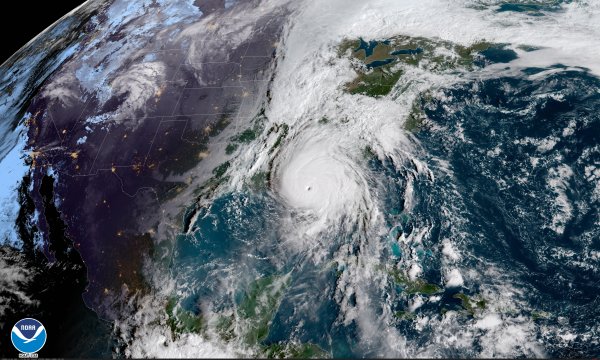 Hurricane Michael Death Toll Stands at 16
Next Up: Editor's Pick