Sears Could File for Bankruptcy As Soon As This Weekend

This file photo from Thursday, May 25, 2017, shows a Sears store in Hialeah, Fla.
AP/REX/Shutterstock
By Katherine Doherty / Bloomberg

Sears Holdings Corp., the struggling U.S. retailer owned by hedge fund manager Eddie Lampert, is laying the groundwork for a bankruptcy filing as soon as this weekend as it faces a critical debt maturity.

Lampert, who for weeks has been pushing a debt restructuring proposal that would avoid a Chapter 11 filing, is now focused on a deal that would preserve stakeholders’ value in a court restructuring, according to a person with knowledge of the matter. The company is in talks for financing that would fund operations through bankruptcy, said the person, who asked not to be identified because the discussions are private.

Sears faces $134 million of debt maturing on Oct. 15, and Lampert’s ESL Investments said in a filing last month that the borrowings coming due were among those creating “significant near-term liquidity constraints” for the company. ESL, the retail chain’s biggest shareholder and also a major lender, proposed last month for Sears to refinance its debt and sell real estate to help pay down borrowings.

The company has taken a number of steps in recent days to prepare for a filing. It hired boutique advisory firm M-III Partners LLC, the Wall Street Journal reported late yesterday, citing people familiar with the situation it didn’t identify. The company separately said it named restructuring expert Alan Carr to its board of directors. CNBC earlier reported that the company was arranging a bankruptcy loan, known as debtor-in-possession financing.

Lampert has been using his own money for years to keep Sears from collapsing as its customers defect and sales fall. The 125-year-old retailer, based in Hoffman Estates, Illinois, has relied on piecemeal deals and infusions from the hedge fund manager to offset billions of dollars in losses. Meanwhile, it has shuttered hundreds of money-losing stores, and it promised to close an additional 150 this year.

The company’s shares are trading at around 59 cents and are down more than 90 percent in the last 12 months. 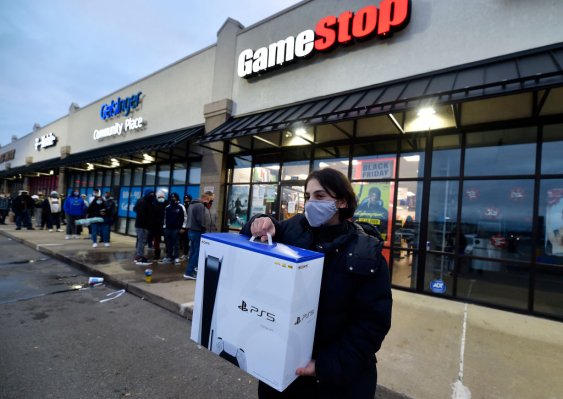 Why Has GameStop's Stock Gone Up So High Recently?
Next Up: Editor's Pick