The death toll for Hurricane Michael continues to rise as Mexico Beach search-and-rescue teams began finding bodies in the town that was hit the hardest by the storm after it made initial landfall on the small coastal community.

Residents of Mexico Beach were under mandatory evacuation orders but state officials said 285 residents chose to stay. The Florida National Guard rescued 20 survivors on Wednesday after the storm hit, but are searching for victims and survivors days later, digging through rubble and debris and assessing the damages to the town populated by 1,200 residents.

Miami Fire Chief Joseph Zahralban is leading the search-and-rescue efforts in Mexico Beach. “There are individuals who are deceased. We do not have a count, but we are working to identify them.” he said.

At least 16 people, including an 11-year-old girl, have died after Hurricane Michael made its way through the Florida panhandle, though the number is expected to increase.

On Friday, Virginia State Police confirmed five people died in hurricane Michael-related incidents. In separate incidents four people drowned after being swept away from their vehicles and in Hanover County, Virginia a firefighter died in a car accident involving a tractor trailer.

Four people died in Hurricane Michael-related incidents in the Florida county of Gadsden, according to the Gadsden County Sheriff’s Office. The first deaths attributed to the storm came on Wednesday, the day Hurricane Michael made landfall on the Florida Coast, when Gasden County officials confirmed one person died in Gretna, Fla. and one person died in Quincy Fla. Two people also died in Gadsden County’s Greensboro, Fla., including a man who died after a tree fell on his home, police said. Authorities have not confirmed the cause or identities of the other victims.

In southwest Georgia, an 11-year-old girl died after strong winds slammed a metal carport into grandparents’ home in Seminole County. County coroner Chad Smith identified the girl as Sarah Radney, and said the cause of her death was likely blunt force trauma to the head.

In North Carolina, Iredell County Emergency Management officials confirmed a 38-year-old man and a woman were killed when a tree fell on his moving car on the Old Mocksville Highway. On Friday, police in Marianna, Fla. confirmed three people died in storm-related incidents.

The storm made landfall near Mexico Beach, Florida as an unprecedented Category 4 hurricane, with winds of up to 155 miles per hour Wednesday afternoon.

“Hurricane Michael is the worst storm that the Florida Panhandle has ever seen, and one of the worst power storms to ever make landfall in the United States,” Florida Gov. Rick Scott said at a press conference Wednesday night. Just three major hurricanes have hit the Panhandle since 1950.

The hurricane has officially been downgraded to a tropical storm, and is continuing to weaken as it travels northeast through eastern North Carolina and southeastern Virginia Thursday evening until it moves off the mid-Atlantic coast early Friday, according to a National Hurricane Center advisory.

Images and videos posted on social media have revealed the destruction Michael left in its path, including flattened buildings and heavy flooding.

How did Michael become such a powerful storm?

This photo made available by NASA shows they eye of Hurricane Michael, as seen from the International Space Station on Tropical Weather Space Station, on Oct. 10, 2018.
Uncredited/AP/REX/Shutterstock

Erik Salna, Director of the International Hurricane Research Center, says a combination of warm water temperatures and wind sheer helped intensify the storm, which was upgraded to a Category 4 storm on Wednesday morning shortly before it made landfall on the Florida Panhandle.

“It’s amazing, rapid intensification and it’s not always easy to predict how strong these storms can get,” Salna tells TIME.

Salna said the intense winds and the life-threatening storm surge would be the biggest threats for residents living in the hurricane’s path.

“The Panhandle has never seen a hurricane of this magnitude, but there was certainly enough warning so no residents can say they didn’t expect it,” Salna says. “A common thing that happens is people will say they expected a Category 2 storm not 4, but that is not how it works. People need to know they should not play that category game when it comes to hurricanes. If officials warn of storm surge and rains they should take that seriously.”

“The good news on Michael is that it’s going to keep on moving,” Salna said. “Florence stalled and just sluggishly meandered over the Carolinas, so it had the opportunity and time to drop heavy rains like Hurricane Harvey. Michael is not going to do that.”

As the storm made landfall on Wednesday it destroyed buildings and fully submerged others, killing four people in Florida on Wednesday — including one man in Greensboro, Fla. when a tree crashed through his home.

A tropical storm warning is in effect for the Pamlico and Albemarle sounds in North Carolina as well as the South Santee River in South Carolina to Duck, North Carolina, NHC said.

Michael was downgraded to a tropical storm and was moving past Northeast Durham, NC. with maximum sustained winds of 50 mph by Thursday afternoon.

What’s the devastation like in the Georgia and the Carolinas?

In North Carolina, more than 530,000 residents are currently without power after Michael passed through the region with 60 mph winds, and dumped heavy rains that have left flooding of up to 7 inches.

In Georgia, more than 300,000 residents experienced power outages after Michael passed through the state with 115 mph winds on Wednesday night, knocking down power lines and trees. Michael became the first Category 3 hurricane to hit Georgia since 1898.

The Georgia State Agriculture Commissioner’s Office said there was an estimated $1 billion worth of damage to Georgia’s cash crops, which include cotton, pecans and peanuts.

Write to Jamie Ducharme at jamie.ducharme@time.com, Gina Martinez at gina.martinez@time.com and Katie Reilly at Katie.Reilly@time.com. 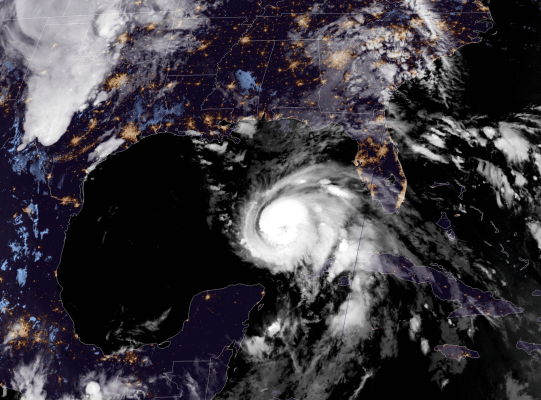 The Entire Florida Panhandle Is Now Under a Hurricane Warning As Michael Approaches
Next Up: Editor's Pick