The Financial Times said on Tuesday it would appeal the Hong Kong government’s decision to reject the application made by one of its editors for a renewal of his work visa.

Victor Mallet, Asia news editor for the Financial Times, was denied a renewal of his visa on Friday, in what many believe to be a reprisal for his chairing of a talk by Hong Kong independence activist Andy Chan in August at the Foreign Correspondent’s Club (FCC), where Mallet serves as vice president.

China’s president Xi Jinping regards Hong Kong independence as a “red line” issue that must not be advocated or even discussed.

The rejection of Mallet’s application has stoked fears over dwindling press freedom in the semi-autonomous Chinese territory, posing questions over whether other foreign journalists based here will be given similar treatment if they run foul of Beijing.

The newspaper’s announcement of its appeal follows a press conference at which the city’s Chief Executive Carrie Lam refused to explain the decision and said that linking it to Chan was “pure speculation.”

“In the absence of an explanation from the Hong Kong authorities, the FT is appealing the recent rejection of a renewed work visa for Victor Mallet,” the newspaper said in a statement.

When Mallet returned to Hong Kong on Sunday, he received a seven-day tourist visa rather than the usual 6-month visa to which British nationals are normally entitled.

Chan is the leader of the now-banned Hong Kong National Party, which calls for the former British colony’s separation from mainland China.

Controversy over Chan escalated in August when he was invited to address the FCC. The move drew severe criticism from Hong Kong and mainland Chinese government officials, who called on the FCC to cancel it, but the press club refused, with Mallet arguing that journalists had a “professional responsibility” to hear from Chan without necessarily endorsing his views. Chan’s party was formally banned last month.

NGO’s, public figures, and journalists are meanwhile sounding the alarm over Mallet’s case. Britain’s Foreign and Commonwealth Office has requested an “urgent explanation” for the rejection of his visa, while the U.S. Consulate in Hong Kong called the decision “deeply troubling.”

Petitions demanding an explanation from the government, in English and Chinese, have garnered more than 25,000 signatures in total. 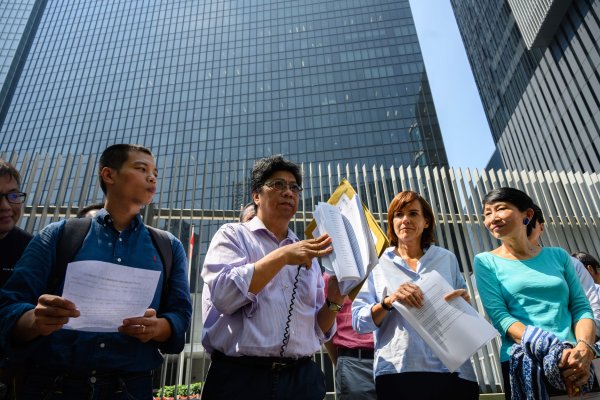