The publisher of EgyptAir’s in-flight magazine has apologized for running an interview with Drew Barrymore that was so strange many on social media questioned its legitimacy.

The BBC reports that the Ahram Advertising Agency, which publishes the EgyptAir’s inflight magazine Horus, said the confusion was the result of several mistranslations between English and Arabic.

“We apologize for any misunderstanding that might be interpreted as an offense to the great artist,” said the agency.

The now viral interview, which was conducted in English, then translated into Arabic, and then back again to English, featured comments on the actress’s romantic history, her body image, and motherhood.

The article stated that Barrymore had “unstable in her relationships,” been in “several unsuccessful marriages,” and was now taking “unlimited vacation to play her most crucial role as a mother,” according to BBC.

Barrymore’s representatives said the 43-year-old “did not participate” in this interview, which went on to praise “her previous graceful body” after birth.

Barrymore then supposedly said, “I feel overwhelmed when someone tells me that I have regained my image and managed to lose that extra weight. However, I find this a great opportunity to encourage every woman who is overweight to work on regaining her beauty and body, especially that it is not as hard as one may think.”

The quotes have raised questions all over social media, with some wondering if the interview was made up and calling it “surreal.”

The interview was conducted by the magazine’s Hollywood reporter Aida Takla O’Reilly, who defended the interview as “genuine” and “far from fake.”

But Barrymore’s representatives said the quotes were taken from a press conference and that the actress did not “technically… sit down with EgyptAir for an interview,” according to BBC.

The magazine’s publisher nevertheless defended the interview, saying the opening was not written by O’Reilly, and that it will look into the translations.

“As is generally accepted, the lead is not part of the text of the article. It is a product of the editor’s creativity produced on the condition that it contains no information that is contrary to the truth,” it said.

“We are about to investigate this by checking thoroughly the source material that the translator depended on to write the interview.” 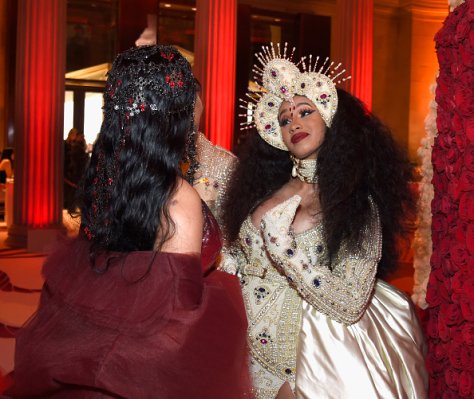 Cardi B Just Addressed That Altercation With Nicki Minaj
Next Up: Editor's Pick