Hurricane Michael continues to intensify and has upgraded to a category 3 storm Tuesday afternoon with the Florida Panhandle in its path.

Hurricane Michael is projected to make landfall along the western Florida coast on Wednesday and pass through parts of Georgia, South Carolina and North Carolina. Mandatory evacuation orders were issued to about 120,000 people living in Panama City, Fla., and across other low-lying parts of the coast as the storm nears.

As of Tuesday evening, Michael is spinning in the Gulf of Mexico 295 miles south of Panama City with maximum sustained winds of 120 mph as it heads north at 12 mph, according to the National Hurricane Center.

The National Weather Service said Michael could produce life-threatening hazards along portions of the northeastern Gulf Coast, including storm surge, heavy rainfall, and hurricane-force winds. NWS added that heavy rainfall from Hurricane Michael could produce life-threatening flash flooding from the Florida Panhandle and Big Bend region into portions of Georgia, the Carolinas and southeast Virginia.

According to NHC, the worst storm surge is expected between Mexico Beach and Keaton Beach in Florida where nine to 13 feet of inundation is possible. 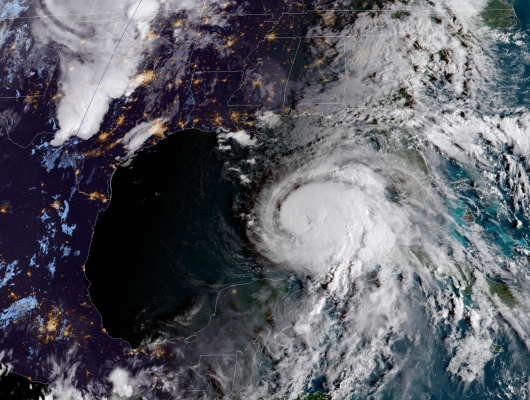 Passenger Captures Video of Cruise Ship Being Battered by Rough Waters From Hurricane Michael
Next Up: Editor's Pick