President Trump may not be running for reelection yet himself, but the days and weeks before the 2018 midterms have been busy for him nonetheless.

On Thursday night, Trump appeared in Missoula, Mont., to stump for Senate candidate Matt Rosendale and incumbent Rep. Greg Gianforte running for re-election; on Friday he went to Mesa, Ariz., for Senate candidate Martha McSally; and on Monday he’ll be in Houston for Sen. Ted Cruz. There’s no question that the rallies are drawing crowds — the Houston event had to be moved to a bigger venue — but whether they actually make a difference will have to wait till Election Day to be seen.

That said, enough people think it works that it’s considered normal for a sitting President to campaign for congressional candidates during midterms season. But that wasn’t always the case — and when Presidents do get involved, it doesn’t always help.

For about the first 150 years of American history, presidents were reluctant to campaign for anyone, even themselves. The hesitancy dates all the way back to George Washington, according to political scientist Brendan J. Doherty, author of The Rise of the President’s Permanent Campaign and a professor of political science at the United States Naval Academy. “Early presidents followed the example of Washington and didn’t want to be seen as seeking the offices they were truly seeking,” he tells TIME.

In 1792, Alexander Hamilton feared that campaigning would turn politicians into “demagogues” who “stir the passions of the masses,” noting that “the only path to a subversion of the republican system of the Country is, by flattering the prejudices of the people, and exciting their jealousies and apprehensions, to throw affairs into confusion, and bring on civil commotion.”

And yet Presidents have been campaigning for midterm election candidates at least as far back as Democratic president Andrew Johnson, who didn’t get along with the Republicans who controlled Congress during his administration in the 1860s. Even though he’d gotten to the White House as vice-president on a mixed-party ticket with Republican Abraham Lincoln, and even though he was the only member of Congress from the Confederate states who stayed in Congress when they seceded, Republicans never actually wanted Johnson to be president. After Lincoln’s assassination, they were left to deal with a president who was more sympathetic to the South than they would have liked, Doherty says, and who disagreed with Congress about how to go about reincorporating those states into the Union. (“It didn’t help Johnson’s case that he was frequently intoxicated in public,” Doherty adds.)

The feeling was mutual. Johnson thus launched his so-called “swing around the circle,” an unprecedented speaking tour during the 1866 off-year election season in which he traveled up and down the Eastern seaboard and to Ohio, vowing to “fight traitors in the North.”

“It was seen as a failure in two ways: He wasn’t particularly successful at helping Democrats win office,” Doherty says, “and when Republicans impeached him in 1868, one of the charges included the scurrilous things he said about Congress during the campaign, like calling members illegitimate.”

Plus, many people considered it undignified for presidents to travel around the country like that. The 1896 presidential campaign provided a perfect example of the two schools of thought: eventual president William McKinley preferred people to come to his front porch in Canton, Ohio, if they wanted to hear him, but the populist leader William Jennings Bryan took advantage of the expanded railroad systems by parking himself in the caboose of a train — which gave its name to “whistle-stop” campaigning — in an effort to reach the masses directly.

“With the populist movement, the idea began to develop that presidents should have a relationship with the people,” says Sidney Milkis of the University of Virginia’s Miller Center of Public Affairs, who spoke to TIME as part of a presidential-history partnership between TIME History and the Miller Center. That idea encouraged presidents both to campaign for themselves and to get out on the road to support other politicians with whom they agreed.

As with so many things in American history, a turning point came with Franklin Delano Roosevelt.

Experts say the first midterm elections truly nationalized by a president came with FDR’s attempt to punish fellow Democrats who did not support his New Deal policies. In 1938, in an attempt to make sure these dissidents wouldn’t get in the way of his bid for a third term, he actively campaigned for their primary-election opponents. But the results of that purge have usually been considered an object lesson in why presidents should not get involved in their party’s primary elections. The four Senate Democrats that the President tried to sabotage won renomination; he only succeeded in de-throning the New York Congressman who chaired the House Rules Committee. And more people who could stymie his agenda got elected, as Republicans won more than 80 House seats and eight Senate seats, in what TIME identified as “the greatest Congressional turnover since 1894.”

“Presidents shied away from intervening in primary battles until Trump,” says Milkis, who argues that Trump’s involvement in this year’s midterm primaries “was the most dramatic since the 1938 purge campaign.”

And FDR did win two more terms in office himself. Though some future presidents would be reluctant to follow his example of actively campaigning — after all, it hadn’t worked out exactly as planned — his influence would change the role of the president in relation to Congress. Milkis argues that the more influential federal government that emerged during the New Deal era, with the President at its center, extended to the question of midterm campaigning. The more powerful the President was, the more he mattered in the election. That trend of expanding presidential power has generally continued to this day.

A key example of effective presidential action during the midterms came in 1962.

Even before the Cuban Missile Crisis that October — what would be called an “October surprise” today — President John F. Kennedy had been delivering speeches designed to influence the elections. As the crisis evolved, he didn’t break his plans. “After the start of the 1962 Cuban Missile Crisis, but before it became public, President Kennedy gave midterm campaign speeches in Connecticut, Ohio and Illinois in order to avoid the public concern that a last-minute cancellation might have sparked,” according to Doherty. The events of that month are thought to have encouraged voters to keep the status quo. Democrats lost only four House seats, contributing to one of the lowest losses of House seats for the sitting president’s party during any midterm elections ever.

“[Between] Kennedy’s celebrity and the emergence of television, since then almost all presidents have played a big role in campaigning for their party and raising money for the party,” says Milkis.

Plus, it’s important to remember that in the modern American political system, the party in power generally loses seats in the midterm elections. That means a president whose own party is in power has a particular interest in minimizing those loses, and one whose party wishes to flip a congressional chamber has reason to hope it might be possible. And as Doherty puts it, “When it comes to midterms, parties are victims of their own success.”

President Bill Clinton learned that lesson the hard way during the so-called Republican Revolution when, in 1994, Democrats lost control of the House of Representatives for the first time in 40 years — as well as the Senate. As a response, in 1996 and 1998, even as he weathered personal scandal, he wanted to go on the campaign trail to do damage control and win back as many seats as he could. Nevertheless, Republicans maintained their majorities. “For years we had southerners who voted Republican at the presidential level and Democrat at the House [level], and that stopped dramatically in 1994,” says political scientist Gary Jacobson, author of Money in Congressional Elections: The Politics of Congressional Elections. “Since then, that pattern has disappeared, and there’s very little crossover voting.”

Clinton would travel nationwide to stump and fund-raise for any Senate candidate who would let him, though not everyone would. “Clinton’s favorite remedy for personal and political malaise was to hit the road” so “advising Clinton to stay off the campaign trail in October was like asking him not to breathe,” George Stephanopoulos wrote in his memoir All Too Human.

On the other hand, a popular president can be in high demand on the campaign trail. For example, in 2002, Republican congressional candidates were eager for George W. Bush to show up, hoping to ride on the coattails of his record-high approval ratings after the September 11th terrorist attacks.

Now, in the 21st century, this trend toward presidential midterm campaigning is only increasing. However, Jacobson notes that even presidents’ fundraising capability is more limited in the Citizens United era. “There’s so much other money coming in from outside groups that the President doesn’t control or raise money for, so his contribution is probably less than it would have been 20 years ago,” he says.

Not that that’s keeping Trump from trying. 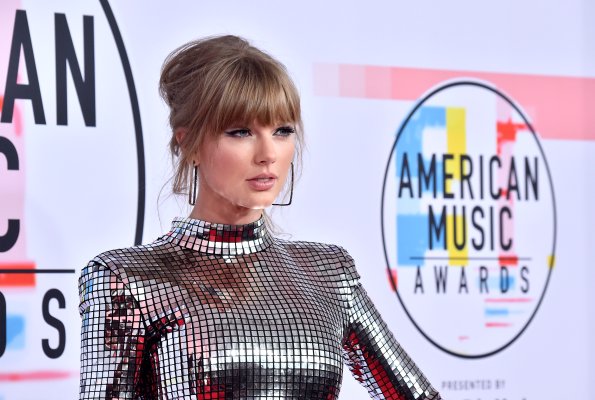 Taylor Swift Has a New Political Message for Her 112 Million Followers
Next Up: Editor's Pick