A floating light. A ghost named Jack. An angry devil.

Though jack-o’-lanterns are now an American cultural icon of Halloween, their symbolism is quite recent — and the story of how they came to be is a complicated one.

The custom of carving a face into a pumpkin for Halloween is an American amalgamation of different European autumnal customs and an old piece of spooky folklore, explains Lesley Bannatyne, an author of five books on Halloween history, literature and culture.

Starting in the 1800s, Bannatyne says, countries in Northern Europe developed their own customs of carving faces into vegetables in the fall season. In Ireland and Scotland, for example, people would carve faces into turnips, and beets were used in other places as well. Though 19th century immigrants very well could have brought their vegetable-carving traditions to the U.S., Bannatyne says it was actually something else that really popularized the carving of a pumpkin: its potential as a prank.

Before Halloween was widely celebrated in the United States, kids started taking pumpkins — which were overwhelmingly plentiful during the months of September and October — and carving faces into them. After sticking a candle in the pumpkin to light it up, kids would run around, Bannatyne tells TIME, frightening people with the spooky-looking objects. The so-called “carved pumpkin trick” became so popular that there were even how-to articles printed in magazines as early as 1842.

Poet John Greenleaf Whittier (1807-1892) described the practice in his poem “The Pumpkin”: “When wild, ugly faces we carved in its skin, / Glaring out through the dark with a candle within!”

This growing popularity of the “carved pumpkin trick” happened to coincide with the country’s rising interest in Halloween itself, Bannatyne says. The end of the Civil War also brought an increased cultural interest in ghosts. “So many men went missing in the Civil War, so you didn’t know whether your loved one was alive or dead,” Bannatyne says. Meanwhile, as the curiosity surrounding death grew, so too did the number of immigrants coming to the United States, which gave an extra appeal to the notion of a new American holiday that everyone could celebrate together.

“Holidays were one way we had, as a culture, to put everybody on the same page,” Bannatyne explains.

So, where did the name Jack come from? There are a few steps in this story, and the etymology of “jack-o’-lantern” is almost unrelated to its modern meaning and tradition.

According to one prominent theory, the “Jack” in question is the subject of an old folktale. The story, which has several different iterations, can be traced back to as long ago as 1551, Bannatyne says, and is quite sinister indeed. Often called “Stingy” Jack, he spends much of his life tricking the devil. In many versions of the story, the frustrates the devil so much that upon his death, he is locked out from the gates of Hell. The devil leaves Jack with nothing other than a burning piece of coal, and Jack wanders aimlessly for the rest of eternity: just a ghost and his floating light.

“Jack of the lantern,” according to that version of the history, became “Jack-o’-Lantern.”

Based on Jack’s tale, there remains a bit of irony in his pumpkin’s symbolic ability for bringing people together. And the pumpkin itself was a rather sinister vegetable historically, Bannatyne writes. In fact, European art from the 16th century used the pumpkin as a symbol for North American “untamed wilderness,” as she explains.

But still, the story of Jack and his lantern has nothing to do with a pumpkin.

It was only after 19th century Americans saw the connection between the legend and the spookily lit-up carved pumpkins they were creating that the two came to be seen as connected. By the early 20th century, carved pumpkins had adopted the name we now use.

Like all good legends, the tale of Stingy Jack was born from some truth, as a medieval explanation for the “flame-like phosphorescence caused by gases from decaying plants in marshy areas,” as Merriam-Webster’s dictionary puts it. Despite scientific explanations for these flashes, “marsh lights” held their sinister air of mystery for hundreds of years, inspiring even more stories of how they were related to the dead, Bannatyne says.

It’s no surprise then that each aspect of the journey to the jack-o’-lantern as we know it — the legend of Stingy Jack, marsh lights and the carved pumpkin trick — carries a certain air of mystery. After all, the carved pumpkin has evolved into the modern icon of the one holiday dedicated to fright. 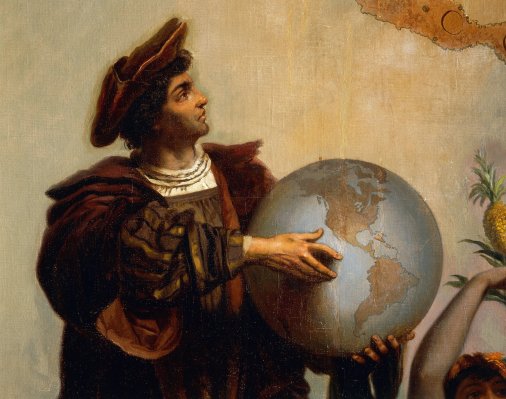 Columbus Believed He Would Find ‘Blemmyes’ and ‘Sciapods’ — Not People — in the New World
Next Up: Editor's Pick