Why Taylor Swift's Political Endorsements Could Be So Powerful in Tennessee

During my campaign for the United States Congress this past year, I would spend many weekday mornings at the City Cafe in downtown Murfreesboro, Tenn. — my hometown, about 45 minutes southeast of Nashville. When I finished my daily serving of coffee, sausage, biscuits, and grits, I would get to work attempting to charm the patrons of the venerable diner with twin goals in mind: building friendship and getting votes.

It wasn’t an easy task for a young progressive. Tennessee is one of the most rural and conservative states in the nation. (President Trump won it by 26 points in 2016.) But I started sensing that my retail politics was gaining traction in this former southern Democratic stronghold, so I decided at some point I was going to try to win over my biggest skeptic: the 21-year-old cashier who worked shifts in between classes at the nearby university.

Every day, I would pitch her with a wide smile, a sober argument and a kind ask for her support. And every day, she would turn me down with such charm that she could’ve told me to go to hell, and I would’ve looked forward to the trip.

So, being the nimble politician I imagine myself to be, I remember deciding one day to change my strategy. I asked her, “Ma’am, who is one person who could get you to vote for me?” She pondered for a few moments, looked at me through her tortoise-shell glasses and said with a smile, “Taylor Swift.” “Shake It Off” was blasting in the background.

I never got Taylor’s endorsement. But on Sunday, U.S. Senate candidate Phil Bredesen grabbed the coveted endorsement — her first ever — and perhaps fundamentally changed the dynamics of one of the most competitive Senate races in the country.

It hasn’t been an easy month for Bredesen in his run against the Trump-endorsed Republican Congresswoman Marsha Blackburn. While Bredesen has focused on local issues and his record as a moderate, job-creating, two-term governor, Blackburn has tried to nationalize the race, arguing — despite the evidence to the contrary — that Bredesen’s campaign is “bought and sold for by Chuck Schumer” and that voting for him is voting against Trump and for impeachment.

Bredesen pushed back against those charges and, in fact, disappointed many progressives in the state when he went as far to admit last Friday that he did in fact support Judge Brett Kavanaugh’s nomination to the Supreme Court.

But in the dog years of the 2018 media cycle, those storylines went out the window with Swift’s surprise endorsement. While many in the national media are focused on the fact that Swift was one of the few major celebrities to stay out of politics the past two years before this endorsement, for Tennesseans, that isn’t of great importance. For us, this is a local story.

A resident of Nashville since 2004, for Tennessee, Swift isn’t just an international celebrity. She’s first and foremost a Tennessean — one of us. If Dolly Parton is Tennessee’s queen, then Swift is the princess and heir apparent. And like her predecessor, Swift has used her cultural power for a rare occasion to intervene in Tennessee politics at a crucial time.

Tennessee has a history of electing bipartisan, pragmatic moderates. Though retiring Republican Senator Bob Corker never got my vote, I — along with many Tennessee Democrats — was proud to see him at times stand up to the President in the past two years. Blackburn is no Corker. She’s laid her entire candidacy on total fidelity to the President, even over and above fidelity to what Tennessee stands for.

Taylor Swift noted that in her endorsement, which also backed Democratic House of Representatives candidate Jim Cooper: “In the past I’ve been reluctant to publicly voice my political opinions, but due to several events in my life and in the world in the past two years, I feel very differently about that now.” She continued, “[Blackburn’s] voting record in Congress appalls and terrifies me. She voted against equal pay for women. She voted against the Reauthorization of the Violence Against Women Act, which attempts to protect women from domestic violence, stalking, and date rape. She believes businesses have a right to refuse service to gay couples. She also believes they should not have the right to marry. These are not my Tennessee values.”

In national politics, there’s an old adage that “as goes Ohio, so goes the nation.” For Tennessee the past two generations, it’s been “as goes Murfreesboro, so goes Tennessee.” For Bredesen, this is particularly true. His pathway to victory lies in the suburban communities outside of the state’s three biggest cities — Memphis, Nashville and Knoxville. The biggest swing-voting demographic there is women.

In short, Taylor Swift’s fan base.

Polling in the state has been tight, but two post–Kavanaugh hearing polls have given Blackburn a very narrow lead. Swift’s endorsement was exactly the early October surprise that Bredesen needed. 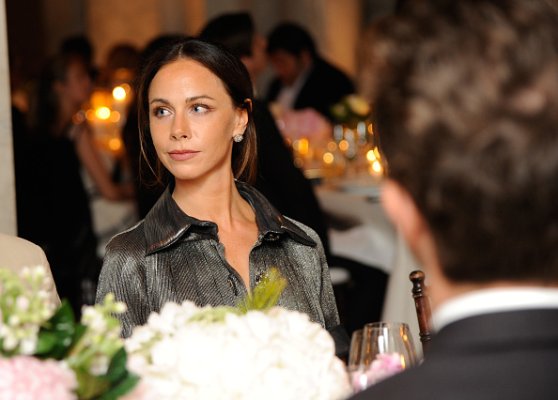 Bush's Daughter Pays Tribute to Grandmother at Wedding
Next Up: Editor's Pick