President Donald Trump offered praise to an Illinois school resource officer who stopped a school shooting while addressing the International Association of Chiefs of Police on Monday.

Dixon Public Schools police Officer Mark Dallas, who in May confronted an alleged gunman who targeted Dixon High School, was named the IACP’s “Officer of the Year” for his quick work in stopping the potential school shooting.

Dallas chased the suspect, Matthew Milby, after he allegedly fired shots near the school’s gymnasium, where seniors were practicing for graduation. The Chicago Tribune reports Milby allegedly entered the gym’s foyer and fired toward a teacher. Dallas arrived at the scene “within seconds” and began chasing Milby. The two eventually exchanged gunfire, and Milby was injured. Dallas was unharmed.

Trump honored Dallas when he addressed the International Association of Chiefs of Police in Orlando.

“Mark Dallas was on duty at Dixon High School in Illinois when he heard gunshots. Within, listen to this, three seconds he was at the scene right outside the auditorium where the entire senior class was gathered and was in a lot of trouble. The shooter fled and fired shots at him but officer Dallas chased him down before a single student was injured,” Trump said. “Officer Dallas’s son, Joshua, was one of the seniors inside of that auditorium. Afterwards, Joshua said, ‘I wasn’t scared for my life at all because I knew my dad would protect us.’ How good is that?”

In May, Joshua Dallas told ABC 7 he knew his dad would “protect us all.”

“I never once feared for my life,” he said. “But it did scare me that he was the one going after the shooter.”

In accepting the honor on Monday, Mark Dallas said: “My son said he wasn’t scared because dad was out there. I was dad to 182 other kids in that gymnasium.” 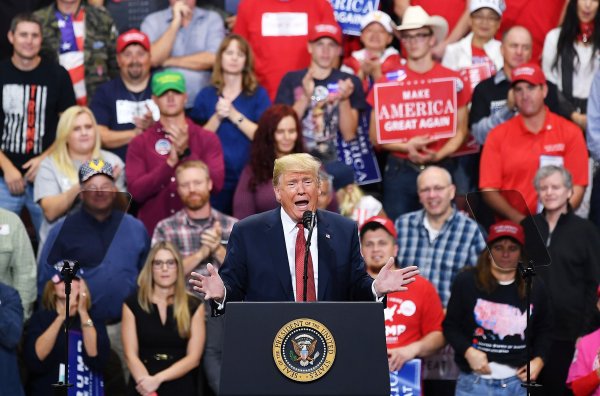