Why Modern Misogynists Love Ancient History, and What They Get Wrong About It, According to an Expert

A couple of months after launching the online classics journal Eidolon, its editor-in-chief Donna Zuckerberg noticed something surprising. An August 2015 article called “Why is Stoicism Having a Cultural Moment?” had turned out to be a major traffic hit, and she could see that a lot of its readers were finding the site on Reddit. Following that path, she arrived at a Stoicism subreddit where she found thousands of people discussing the ancient Greek philosophical school. But one of the posters responding to the popular Eidolon link on the site had a different idea about the source of all that interest, one that was new to her as a classics scholar. The poster suggested that the men of the Red Pill community, which Zuckerberg loosely defines as a group motivated by the idea that society is set up to privilege women, loved the Stoics.

Not long after that, she read an interview in The Atlantic with Neil Strauss, who had written about a subset of that group, the community of “pickup artists” whose interest in understanding society and psychology centers on the desire to improve their seduction abilities. The ideas he saw in that modern phenomenon, he noted offhandedly, dated back to the Roman poet Ovid. It was clear to Zuckerberg (who, yes, is a sister of Mark Zuckerberg) that something really was going on. In her book Not All Dead White Men: Classics and Misogyny in the Digital Age, she explores how ideas about Ancient Greece and Rome are used and misused by antifeminist thinkers today.

She spoke to TIME about her new book, the truth about the Western canon and why not to believe everything you read — especially when it comes to Ovid.

It was interesting to prepare for this interview while watching the Kavanaugh hearings; I was reminded of your discussion of how different people get different things out of the Phaedra story. This one story — of an Athenian queen who falls for her stepson and, when he rejects her, tells her husband that he raped her — is read by some people as a warning about false rape allegations, and by others as a warning about the consequences of patriarchy. Did your research come to mind as you were watching the news?

Actually what struck me the most was what Christine Blasey Ford said about the two of them laughing, that they were laughing with each other. That reminded me of the research I’d done for my pickup-artists chapter about how the relationship between the two men becomes almost more important than whatever is happening between the man and the sexual object. That was what struck me the most. But yeah, a few friends who had also looked at the book told me that they felt that the Phaedra chapter felt really resonant to them as well, this idea that what it means for an allegation to be false is entirely determined by whoever’s in power.

What is it about Ancient Greece and Rome that make them so appealing as a source of authority for the ideas you write about?

It’s not only Greece and Rome. [The people in the Red Pill community] are also interested in the Medieval period, various other historical periods, the Confederacy. But I think that Greece and Rome, for them, are really the origin of Western civilization. It becomes a coded phrase when they don’t want to talk about white identity [or] white history, because that brings with it all kinds of baggage. Instead they talk about Western civilization and it’s really a dog whistle.

You write that the Alt-Right has used “ancient Greece and Rome to fabricate a cohesive transhistorical ‘white’ identity and a continuity of ‘European’ or ‘Western’ civilization.” What’s a more accurate way to see the idea of a Western tradition?

So, it’s not that there is no Western canon, it’s that it’s created in hindsight?

Exactly. The narrative is never as neat and as teleological as we want it to be. It’s very much constructed at any moment in time, usually with an agenda in mind. When you talk about Greek literature being rediscovered in the Renaissance, which is a line that people use, Greek literature was never lost. People were talking about it all along, in what we call the Byzantine Empire. It’s just a different narrative.

Imagine someone is coming onto the Internet for the first time…

They might stumble across something in a pickup artist forum that suggests reading Ovid. What would your advice be for a layperson to read these texts with a smart, critical eye?

It depends on how much time they have! For example, if you read almost anything about Ovid that is written by somebody who has read a lot of Ovid, they will talk about how difficult Ovid is to pin down and his literariness and all those issues that make it much, much harder to say that Ovid “means” anything specifically. When pickup artists say things like, “Ovid shows that women have always been the same,” that implies a reading of Ovid that almost nobody who has studied Ovid would support.

Would it be fair to say that if you encounter somebody arguing that some ancient writer teaches us something simple, that’s probably not the whole story?

That’s safe to say. And it’s not just Red Pill-types who are guilty of that. There’s always a “yeah but” and then a giant string of objections you can make to any simplistic reading. But I think that’s also why people don’t like talking to scholars about these kinds of issues, because it’s so hard to get us to say anything really definitive.

You also discuss in the book that the same texts — namely, Ovid’s Metamorphoses — have been the subject of controversy over whether they might benefit from content warnings for descriptions of rape. Do you have any advice for people reading such texts that they might find problematic?

Find the best translation you can and really read the introduction before you start. My personal experience with content warnings and trigger warnings is not typically that people do not want to engage with the material. It’s that they want to be prepared. They want to know what they’re dealing with. On the other hand, there’s something to be said for coming to a text without some scholar’s ideas and arguments, coming to it with fresh eyes. So there’s a trade-off implied there.

Was there anything you found in your research that really surprised you?

Some of the texts that they deal with are really quite obscure. [It’s] not to classicists, but Xenophon’s Oeconomicus, for example — that’s not something your average layperson will have heard of. How wide-ranging they’re willing to be within the corpus of ancient literature to look for ideas that will support their views, that really surprised me.

What did you make of that?

It seems that there’s kind of a weird sort of macho performance of erudition where you would then see in the comments section tons of people saying, “I’ve never heard of this text before, this is so fascinating,” but you’d also see a few people showing off that they knew what the writer was talking about — and sometimes getting things really wrong, which to me was funny.

I remember seeing an article on Marcus Aurelius and somebody was saying in the comments, “If you really want to be a pimp,” — which I think is the word he used — “you should read it in the original Latin.” Marcus Aurelius originally wrote in Greek. So… yeah. 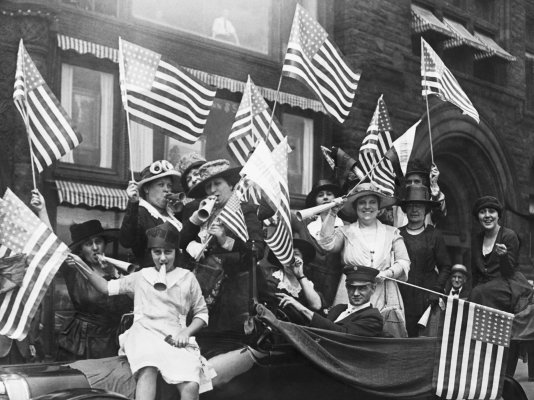 The Surprising Role of Circus Performers in the Fight for Women's Suffrage
Next Up: Editor's Pick