See Tropical Storm Michael From Space as It Becomes a Hurricane

Hurricane Michael is bringing heavy rain and strong winds to parts of Cuba and the threat of storm surge to Florida as it moves northeast toward the Gulf Coast, the National Hurricane Center said Monday.

The storm is about 50 miles south of the western tip of Cuba. It’s moving north at about 7 miles per hour, with maximum sustained winds at 75 mph. The storm is expected to pass between Mexico and Cuba before heading toward Florida.

Satellite imagery from the National Oceanic and Atmospheric Administration (NOAA) shows Michael moving toward Florida and the southeastern United States.

After NOAA released the images of Michael, the National Hurricane Center upgraded it from a tropical storm to a hurricane Monday morning.

The NHC says hurricane conditions are expected over parts of western Cuba. By the time it hits the northeastern Gulf Coast this week, Michael could be a major hurricane. Storm surge and hurricane watches are in effect for parts of Florida and the Alabama-Florida border.

“Some areas along the Florida Gulf Coast are especially vulnerable to storm surge, regardless of the storm’s exact track or intensity,” reads a notice from the NHC. 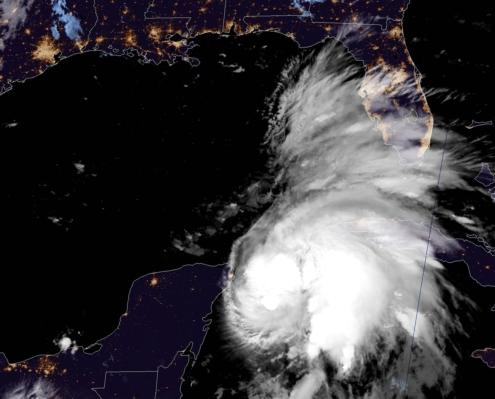 Tropical Storm Michael Will Soon Be Hurricane Michael. See its Path and Track
Next Up: Editor's Pick