Up to 127 People Have Developed a Rare, Polio-Like Illness — and Health Officials Don't Know Why

The Centers for Disease Control and Prevention (CDC) has so far this year recorded 127 suspected cases of a polio-like nervous system disorder that can cause paralysis, fueling an ongoing investigation into an outbreak of the rare disease.

Of those 127 illnesses, 62 cases in 22 states are confirmed to be acute flaccid myelitis (AFM), the CDC said Tuesday. The CDC recorded only 33 confirmed cases of the severe condition — which typically affects kids and can result in muscle weakness or paralysis, respiratory failure and even death — during all of last year, though there were 149 cases the year before.

“We have not been able to find the cause of the majority of AFM cases,” said Dr. Nancy Messonnier, director of the CDC’s National Center for Immunization and Respiratory Diseases. “We have detected enterovirus in several of these individual cases.”

A few AFM clusters have made headlines recently. Three children were treated for suspected cases of AFM at UPMC Children’s Hospital of Pittsburgh, ABC News reports, joining a cluster of cases in Minnesota and another in Colorado. The Minnesota Department of Health (MDH) has since mid-September received a half-dozen reports of children with AFM, according to a statement. All of the Minnesota patients are younger than 10, and cases have been reported in northeastern and central parts of the state, as well as the Twin Cities area.

“That is definitely more than would be expected,” says Kris Ehresmann, director of the infectious disease division at MDH. “To have six cases is really a striking departure from the norm.”

Indeed, AFM is exceedingly rare: The CDC estimates that fewer than one in a million people in the U.S. get it each year, though it has been on the rise since a 2014 outbreak, sparking a CDC investigation. Minnesota typically sees a case or less per year, according to the MDH statement; even in 2014, only three cases were recorded there.

AFM affects the spinal cord, impairing muscular function and reflexes, according to the CDC. Arm and leg weakness are common symptoms, but the disease can also involve facial weakness; difficulty swallowing, speaking and passing urine; numbness; and tingling. The condition can become life-threatening when muscles involved in breathing become so weak that the patient goes into respiratory failure, or when the disease triggers serious neurologic complications, the CDC says. Some patients recover fully, while others see lasting neurologic damage.

The condition is “frustrating,” Ehresmann says, because its cause isn’t always clear. It sometimes — but not always — goes along with viral infections including polio, West Nile Virus and respiratory illnesses, but environmental and genetic factors may also play a part, the CDC says. The 2014 outbreak coincided with the spread of respiratory illness caused by enterovirus D68, though not every patient showed signs of both.

Each of the six patients in the Minnesota cluster experienced a viral illness in the days preceding their muscle weakness, Ehresmann says, but it’s not yet clear if they all had the same illness. State health officials are working with medical professionals and the CDC to learn more about the outbreak and its potential causes.

Without a clear cause, it’s not possible to say whether more children will be diagnosed with AFM, Ehresmann says.

“Since we don’t know, really, how it’s transmitted, it’s really hard to say if we’ll see more cases,” she says. “But because there’s been so much attention to this, I think there’s going to be a greater awareness.” 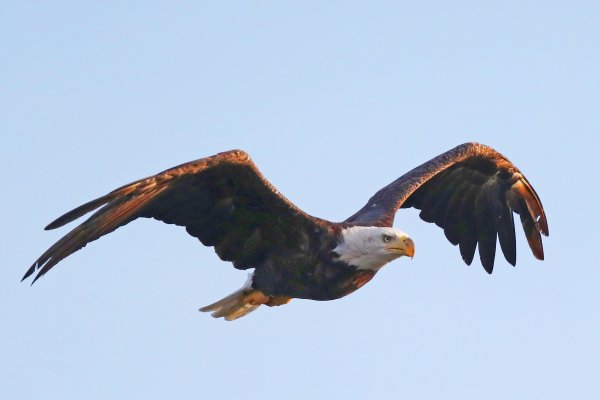 Bald Eagle Lands on a Fire Truck During 9/11 Ceremony
Next Up: Editor's Pick