Sen. McConnell: GOP Senate Could Take Up a Supreme Court Nomination in 2020

(Bloomberg) — Senate Majority Leader Mitch McConnell indicated that a Republican Senate would take up a nomination to the Supreme Court made by President Donald Trump in 2020, the next presidential election year.

McConnell blocked Democratic President Barack Obama’s nomination of Merrick Garland to the Supreme Court in 2016, arguing at the time that voters should have a say in the matter in that year’s election. Garland wasn’t granted a hearing or a vote.

The Kentucky senator then said that the tradition in the Senate since 1880 has been that a vacancy is not filled by a president in an election year — if the Senate is controlled by the opposing party.

That appears to indicate the Garland rationale wouldn’t apply if a Republican president has a Republican Senate majority.

McConnell also said Saturday’s confirmation of Brett Kavanaugh to the Supreme Court is his proudest moment as a senator.

“We stood up to the mob,” he said. “This has been an extraordinarily productive Congress.”

In a separate appearance on CBS News’s “Face the Nation,” the majority leader predicted that the anti-Kavanaugh protests will backfire by energizing the Republican base in the Nov. 6 mid-term elections, in which the GOP is looking to hang on to its majorities in the House and Senate.

A new CBS poll released on Sunday suggested the court battle may have hurt Democratic Senate hopes in states like Texas and Tennessee, where more voters wanted the Senate to confirm Kavanaugh than not.

On the same program, McConnell chuckled when asked if Republicans will not campaign against West Virginia Senator Joe Manchin now that he voted for Kavanaugh — the only Democrat to do so.

“Manchin is still a Democrat and we’re trying to hold onto our majority,” he said.

McConnell also indicated he wouldn’t try to punish Alaskan Republican Lisa Murkowski for her vote against on Kavanaugh, saying she is a member of his conference in good standing. Trump, at a rally in Kansas on Saturday, called Murkowski’s vote “disgraceful.”

McConnell predicted that the House and Senate will soon wrap up talks over a bill creating a new process for congressional employees to make sexual harassment and assault allegations against lawmakers.

“That is something I know will get done before the end of the year,” he said on CBS. 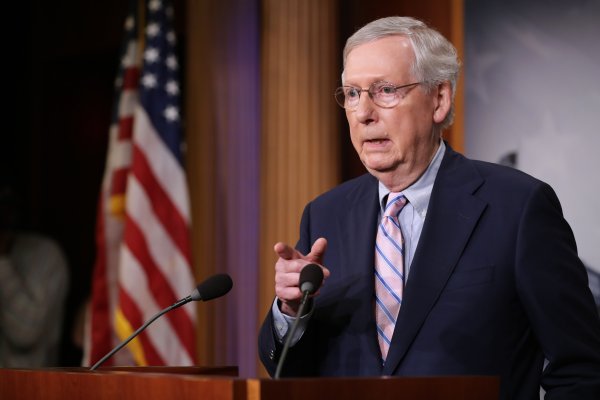 'These Things Always Blow Over.' Mitch McConnell Confident Country Will Move Past Kavanaugh Fight
Next Up: Editor's Pick