Ideas
By Christina Asquith
Asquith is co-founder of The Fuller Project for International Reporting, a nonprofit journalism organization that reports on issues impacting women.

There’s a certain irony that the Nobel Peace Prize—given Friday to those working to raise awareness of sexual violence in conflict—may well have been overshadowed by news of the confirmation of U.S. Supreme Court Justice Brett Kavanaugh, himself accused of sexual assault.

But among the tiny international community that has long toiled in obscurity and frustration in efforts to end rape and sexual assault in wartime, the prize was celebrated, and used as a chance to call for more work to be done.

The Nobel Prize went to Yazidi rape survivor and activist Nadia Murad, and Congolese gynecologist Denis Mukwege for their work in calling attention to rape as a tool of war.

“I’m so excited. It’s great,” says Zainab Salbi, a prominent Iraqi woman’s rights activist, journalist and author of Freedom is an Inside Job. But her joy was tempered by news last week that yet another Iraqi female activist—the fifth since August—had been murdered. “The point the Nobel is making is that when you speak up, it’s not easy or safe, and it makes a difference.”

Others pointed out how long it had taken the Nobel committee to recognize sexual violence in conflict, and the fact that in most countries critical legislation, funding and political will is still lacking.

It wasn’t until the Yugoslav wars of the late 1990s that rape and sexual assault were truly recognized by the United Nations as a crime against humanity. Until then, women were more commonly referred in literature as “spoils of war” and sexual violence was considered taboo.

But violence against women has long been a central factor in war, and as recently as last year, Burmese troops were systematically raping Muslim Rohingya women in a “cleansing” campaign that sparked a refugee crisis, according to Human Rights Watch. Even in countries not in conflict, there are laws in place that treat women’s bodies as public property, implementing invasive practices justified by sexist norms. For instance, in Indonesia, virginity tests are still mandatory for women to enter the security forces.

Too often, perpetrators of sexual violence get away with their crimes, said Melanne Verveer, executive director of the Georgetown Institute for Women, Peace and Security and longstanding activist for stronger international laws for women.

“Impunity for these crimes is pervasive,” Verveer says. “Sexual violence is still viewed too often as collateral of war as opposed to a strategic tool utilized by combatants to achieve their nefarious ends.”

Verveer called for a greater effort to collect reports of sexual violence, to provide treatment for victims and access to justice. She wants better implementation of UN Security Council Resolution 1325, which was adopted in 1990 and was the first time international leaders committed to increasing women’s involvement in conflict resolution and security. And the Security Council needs to take more effective steps within its sanctions regime to address sexual violence in conflict.

In Congo, sexual abuse of women became so overwhelming during the country’s civil war that in 2010 Margot Wallstrom, then the UN special representative on sexual violence in conflict, called it the “rape capital of the world”. Since then the conflict has continued in different parts of the country, and is often perpetuated by civilians, not soldiers. Finding justice for rape has proven almost impossible for women.

Lauren Wolfe, Director of Women Under Seige at the Women’s Media Center, who has reported extensively on rape in the Congo, asked what the future might look like.

“This is long overdue,” she says. “Women are the forgotten casualties of war, and maybe we are talking about this now more than we ever have before, but women have sacrificed so much during conflict over centuries and no one ever recognized it.”

Wolfe says there needs to be more prosecution and better laws. “Even in a place like Congo, when women do win a lawsuit against the army or government, and are awarded compensation, it’s too difficult and expensive to claim the compensation. So no woman has ever gotten the compensation. And they have to pay lawyers fees and travel to Kinshasa.”

Similar restrained cheer came from Abigail Disney, who in the early 2000s made a series of documentaries about women in conflict and met Mukegwe in 2010 when she traveled to Congo to raise awareness about this issue.

“Denis has been a hero in our tiny circle of people for a long time,” Disney says. “He’s so steadfast and worked so hard, and done it underfunded and under appreciated and under threat from militia groups. He is a good man and it’s very validating. No one had to persuade him that women mattered. He’s a genuine ally.”

However, Disney made clear that much more needed to be done. “You don’t want to make war safe for women. You want to end war,” she said. When women are truly equal, and as empowered as men to make decisions about their country and their lives, the change won’t just be that war is safer. It will be that there is less war, overall.

Disney also drew a connection to the Kavanaugh hearings and the broad sense of anger women are feeling about the way violence against them is dismissed. “War is the apotheosis of patriarchy,” Disney said. “Men conducting battle on and in women’s bodies; and we have no value except as it relates to them. We are property. Women won’t be safe until the end of conflict and some might say that’s pie in the sky,” she added. “But conflict is inevitable. Violence is a choice.”

Meanwhile, Nadia Murad herself used the award as an opportunity to call attention to the 1,300 Yazidi women and children still lost or in captivity.

“Like many minority groups, the Yazidis, have carried the weight of historical persecution,” she wrote in a statement. “Women in particular have suffered greatly as they have been, and continue to be the victims of sexual violence.” 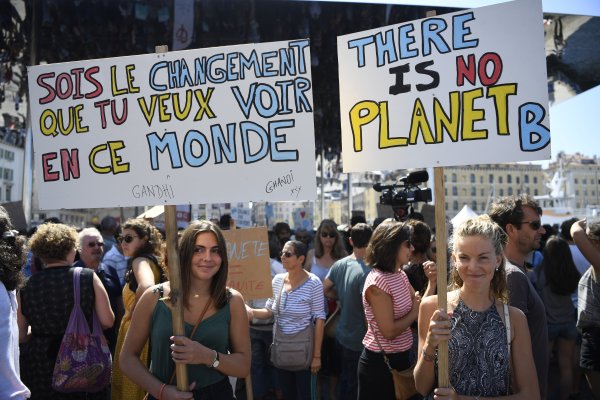