Senate Majority Leader Mitch McConnell said Saturday he was not concerned that the bitter confirmation process for Judge Brett Kavanaugh would affect future Supreme Court nominations or how women view the Republican Party.

“These things always blow over,” McConnell told reporters during a cheerful press conference after the Senate voted to confirm Kavanaugh to the Supreme Court on Saturday afternoon.

Kavanaugh, who three women accused of sexual misconduct, was confirmed to the Supreme Court with 50 votes in favor and 48 opposed after several weeks of rancorous, partisan debate, conflicting testimonies and an FBI investigation that divided the country. McConnell began his remarks by saying that the decision to confirm Kavanaugh was a proud moment.

“This is a good day for America and an important day for the Senate. We stood up for the presumption of innocence. We refuse to be intimidated by the mob of people that were coming after Republican members in their homes and the halls,” the Kentucky Republican said. “I couldn’t be prouder of the Senate Republican conference.”

Demonstrators supporting and opposing Kavanaugh have flooded the Capitol over the last several days, and many who were survivors of sexual assault were particularly vocal in sharing their stories with Senators. Last week, two women confronted Arizona Sen. Jeff Flake to tell him about their experiences with sexual assault, and others traveled from Maine and Alaska this week to talk to Sen. Susan Collins and Sen. Lisa Murkowski. When Collins ultimately decided to vote for Kavanaugh, one woman who had told the Senator about being a survivor told TIME it felt like “a slap in the face.”

Even during the final vote to confirm Kavanaugh on Saturday, protesters shouted from the Senate gallery and urged Senators to vote against the nominee.

When McConnell was asked how he thought Kavanaugh’s confirmation, and the national debate around sexual assault surrounding it, would affect the way women voters view the Republican Party, he indicated he did not see a problem.

“You mean women like Senator Collins? And Senator Fischer? And Senator Hyde-Smith? And Senator Ernst?” he asked the reporter, referring to women Senators who all voted to support Kavanaugh. “This was about treating someone fairly. This was about evidence being relevant, not about unsubstantiated charges.”

On the contrary, McConnell said he was “excited” by how the Kavanaugh confirmation battle has “fired up” the Republican base.

“It certainly had a good impact for us. Our base is fired up,” he said. “The tactics that have been employed both by judiciary committee Democratic Senators and by the virtual mob that’s assaulted all of us in the course of this process has turned our base on fire.”

Other Senators have expressed concerns that the partisan nature of the process and the intense accusations from both sides of the aisle may make future Supreme Court nominations more difficult. Murkowski, for instance, called for healing after the final vote on Saturday and said she was praying for protesters.

McConnell seemed confident the country would be just fine.

“This is nowhere near as challenging as some of the experiences we’ve had in the past throughout our history. The Senate and the Country will get past this. We always do,” the Majority Leader said. “We’ve had plenty of low points in our history and I think this is nowhere near the lowest points we’ve experienced. The McCarthy era, the rise of the Klan in the ‘20s after Woodrow Wilson premiered ‘Birth of a Nation’ in the White House. We’ve had some other low points. We always get past them.” 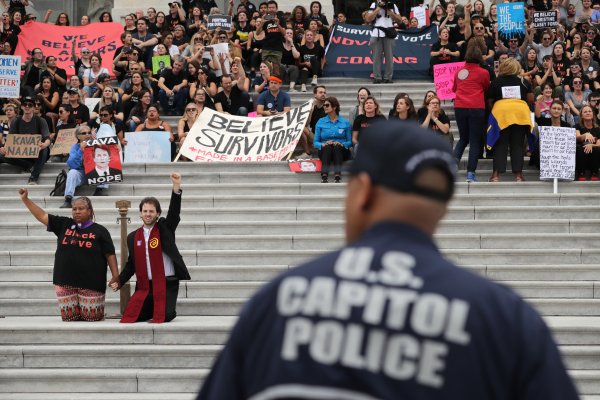