Deborah Ramirez, the second woman to come forward with allegations of sexual misconduct against Supreme Court Justice nominee Brett Kavanaugh, has released a statement criticizing the FBI and the Senate’s response to the allegations.

“Thirty-five years ago, the other students in the room chose to laugh and look the other way as sexual violence was perpetrated on me by Brett Kavanaugh,” Ramirez said in a statement on Saturday. “As I watch many of the senators speak and vote on the floor of the Senate I feel like I’m right back at Yale where half the room is laughing and looking the other way. Only this time, instead of drunk college kids, it is U.S. senators who are deliberately ignoring his behavior.”

Ramirez claims that Kavanaugh exposed himself to her at a party in the 1980s when they were both students at Yale University. Her allegation came a week after Dr. Christine Blasey Ford claimed that Kavanaugh pinned her down and covered her mouth to conceal her screams as he grinded on her and attempted to remove her one-piece bathing suit. Dr. Ford testified in front of the Senate Judiciary Committee last week detailing the alleged sexual assault, which Kavanaugh forcefully denied.

The Senate is set to vote to confirm Kavanaugh Saturday afternoon after a week-long FBI investigation into allegations made against him, which Ramirez implies was not thorough enough.

“This is how victims are isolated and silenced,” she continued. “But I do have corroborating witnesses speaking for me, although they were not allowed to speak to the FBI, and I feel extremely grateful for them and for the overwhelming amount of support that I have received and continue to receive during this extremely difficult and painful time. There may be people with power who are looking the other way, but there are millions more who are standing together, speaking up about personal experiences of sexual violence and taking action to support survivors. This is truly a collective moment of survivors and allies standing together.” 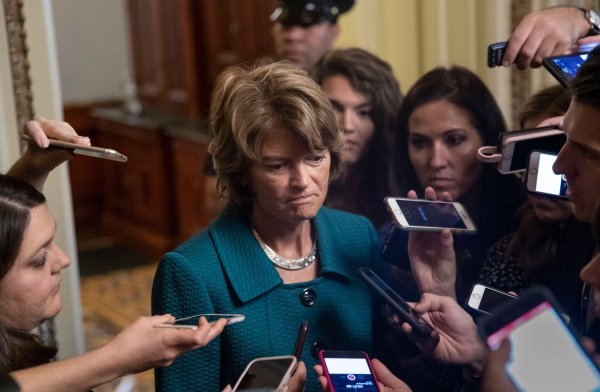 Sen. Murkowski Votes 'Present' as Favor to GOP Colleague
Next Up: Editor's Pick