One of the World's 7,000 Languages Dies Every Three Months. Can Apps Help Save Them?

Like his ancestors, 65-year-old Clayton Long spent his childhood immersed in Navajo culture, greeting fellow clan members with old, breathful Navajo words like “Yá’át’ééh.” Then he was sent to an English-only boarding school where his native language, also known as Diné, was banned. “I went into a silent resistance,” Long says from his home in Blanding, Utah. He vowed that he would help to preserve it after he left, work he has done for about three decades as a teacher. This week, he’s entering new territory on that mission: the app store.

Long is one of the educators working with language-learning startup Duolingo on the company’s latest endeavor: using its popular app to revive threatened languages. On Oct. 8, celebrated in some places as Indigenous People’s Day, Duolingo will launch courses in both Navajo and Hawaiian, two of the estimated 3,150 languages that face doubts about their long-term survival. That’s nearly half of the estimated 7,000 languages spoken around the world.

It’s not something the company anticipates will be a money-maker. “It’s just something we feel like we have to do,” says Duolingo’s Myra Awodey, who led work on the project. The company, which has attracted some 300 million users by offering free, ad-supported lessons in dozens of languages, is in a unique position “not only to preserve dying languages but make them something that’s spreading,” she says.

To back up that claim, Awodey points to the work that the company has done on Irish. Around the time Duolingo launched their course for that language in 2014, there were about 100,000 estimated native speakers. As of today, 4 million people have engaged in learning the language through the app, a feat that earned the company — and volunteers who helped with translations — public thanks from Ireland’s president.

According to linguist David Crystal, languages are now going extinct at a rate of one roughly every three months. The key to revitalizing a language is making sure new generations learn it, and Long hopes to reach hundreds of thousands of young people through the gamified app, compared to the estimated 1,500 learning Navajo the old-fashioned way in his local San Juan County school district. “We’re at the crucial time where we’re going to be losing a lot if we don’t pick up any of the kids who want to learn it or should learn it,” Long says. “When you lose a language, you basically lose a culture.”

While downloading an app is hardly the same as becoming a fluent, daily speaker of a language, linguists say tech-fueled efforts like Duolingo’s can prop up languishing tongues. “Even if all it does is build an awareness that there is a diversity of languages out there, that’s an enormous step,” says Gary Holton, a linguistics professor at the University of Hawaii at Manoa who has studied endangered languages in Alaska.

That fact can easily get lost in a country like the United States, where a single language has come to dominate public life (and where the idea of giving status to anything besides English often causes tempers to flare). But America has been home to an array of languages that are fast becoming relics. In California alone, there were about 100 American Indian languages spoken around the time of the Gold Rush, according to the Oxford Handbook on Endangered Languages. Today, only about 18 are spoken, and none is being taught to children in conventional settings.

Why does it matter? “If languages encode ways of viewing the world, then something is lost” each time a language ceases to be spoken, Holton says. Linguists compare the loss of a language to the loss of a species. Just as our understanding of history and science becomes more limited when a species goes extinct, so does our understanding of humanity become more limited with the extinction of a language.

Languages come under threat for reasons that range from natural disasters to globalization to genocide. In the late 1800s, shortly after the U.S.-supported overthrow of the Hawaiian kingdom, the Hawaiian language was banned from schools; older residents remember being punished for speaking it. Though Navajo is in good shape compared to other indigenous languages, it suffered along with other aspects of American Indian culture as centuries of settlers brought violence and pushed assimilation. Today, after decades of decline, it has an estimated 150,000 speakers.

Duolingo, which fields daily requests to add new languages, from Basque to Scots, decided on Hawaiian and Navajo in part because the company is based in Pittsburgh, Pa., and helping to revitalize indigenous languages felt right, Awodey says. Compared to languages with just a handful of speakers, both also have sizable, passionate communities already working to teach the language to a new generation. Those same groups were also able to volunteer time and expertise to create the course materials, building on a crowd-sourced method Duolingo has repeatedly used to expand its offerings.

Technology has been indispensable in helping to document endangered languages while there is still time, Holton says. A movement to save languages took off in the ’90s, after linguist Michael Krauss made the dire prediction that the coming century would see the “death or doom of 90% of mankind’s languages.” And the digital revolution brought tools to help: the ability to digitally record speakers and transcribe words, to archive dialects and create repositories that experts and supporters could share.

But while technology can be a savior, it’s also one of the forces that threatens to snuff languages out. The Internet is dominated by a handful of tongues like English, Chinese and French. A 2013 analysis suggested that only 5% of languages have a chance of thriving in the digital realm and that there is “evidence of a massive die-off caused by the digital divide.”

Speakers of minority languages often face a trade-off: to take advantage of the digital tools that are fast becoming inextricable from social mobility, they have to do it in a language other than their own. And the next generation is disincentivized to spend time keeping endangered languages alive.

Duolingo is not the only company trying to level the playing field. A few years ago, Oxford University Press launched an initiative called Oxford Global Languages that is focused on boosting “digitally underrepresented” languages, those that might have millions of speakers yet relatively little presence online. Their team has been compiling and publishing digital dictionaries for languages like Hindi, Malay, Indonesian and Romanian, a basic building block that has to be in place long before Siri or Alexa can understand and help a speaker.

“As speakers of English, everything on the Internet has been invented almost for us in a way,” says product manager Richard Shapiro. “There are huge numbers of people who are effectively excluded from that.”

The original version of this story misstated the first name of Richard Shapiro. His first name is Richard, not Robert. 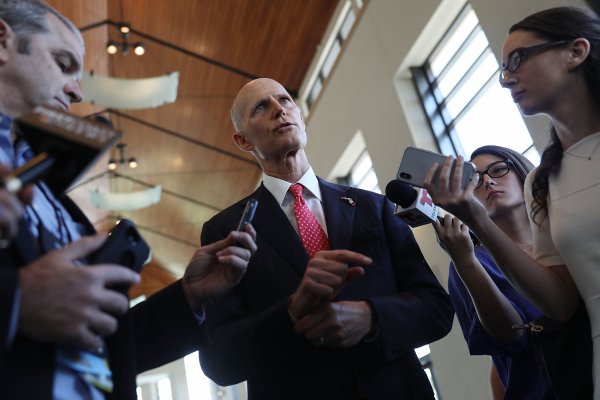 Florida Gov. to Declare State of Emergency in Wake of Tropical Storm
Next Up: Editor's Pick