Lisa Murkowski Is the Only GOP Senator Voting Against Kavanaugh. Her State Has the Highest Rate of Sexual Assault

Alaska Sen. Lisa Murkowski talks with the media in the Capitol after voting "no" on a cloture that advanced the Supreme Court nomination of Brett Kavanaugh to a final vote on Oct. 5, 2018.
Tom Williams—CQ-Roll Call/Getty Images
By Katie Reilly

Alaska Sen. Lisa Murkowski on Friday voted against proceeding to confirm Supreme Court nominee Brett Kavanaugh, and said she would vote against his confirmation — the only Republican Senator to do so — after weeks of pressure from her constituents in a state with the country’s highest rate of sexual assault.

“I have been wrestling to really try to know what is fair and what is right, and the truth is that none of this has been fair,” Murkowski told reporters at the Capitol on Friday.

“I believe that Brett Kavanaugh is a good man. I believe he is a good man. It just may be that in my view he’s not the right man for the court at this time,” she said, adding that “we need to be thinking again about the credibility and the integrity of our institutions.”

Kavanaugh’s confirmation was stalled by allegations of sexual assault against him, though he looks likely to be confirmed in a final vote on Saturday. Thousands of protesters demonstrated in Washington, D.C. and around the country this week, calling on Senators not to confirm Kavanaugh in the midst of a national reckoning over sexual harassment and assault.

That issue has particular urgency in Alaska, where the rate of sexual assault is nearly three times the national average. About 33% of women in Alaska have experienced sexual violence, according to the 2015 Alaska Victimization Survey, conducted by the University of Alaska Anchorage Justice Center for the state Council on Domestic Violence and Sexual Assault.

“That’s one out of three Alaskan women,” says Ingrid Johnson, an assistant professor in the Justice Center at the University of Alaska Anchorage, who studies the issue of sexual assault.

“With the research that I do, when I talk to people about it, almost anyone can immediately start telling me about a friend or a family member they know who has experienced violence,” she says. “There aren’t six degrees of separation from the issue up here. More like one or two degrees of separation.”

In addition to Kavanaugh’s confirmation hearings, high-profile cases of sexual assault recently brought the issue to the fore in Alaska. Last month, an Anchorage man pleaded guilty to assault after offering an Alaska Native woman a ride, strangling her unconscious and then ejaculating on her. He received no jail time — a sentence the assistant district attorney described as “his one pass,” KTVA reported.

“The issues of sexual assault and sexual abuse are just very raw right now for Alaskans, and because the rates are so high, more and more people are finding their voice to say, ‘Stop ignoring us,'” Johnson says.

More than 100 women flew from Alaska to Washington, D.C. with the ACLU this week to lobby Murkowski in person, demanding that she listen to sexual assault survivors and vote against Kavanaugh’s confirmation. More than 350 female attorneys signed a letter calling on Murkowski and Alaska Sen. Dan Sullivan to vote no, the Fairbanks Daily News-Miner reported.

But Murkowski faced a different political calculation on this vote than Sullivan and other Republican Senators. In 2010, she won re-election in a historic victory as a write-in candidate, defeating a Tea Party candidate who had won the Republican primary with support from then-Gov. Sarah Palin. While Alaska voted for President Donald Trump by a 15-point margin in 2016, Murkowski was elected with broad support from non-Republican voters.

“She won with the considerable support of nonpartisan and undeclared voters, and very strong support from the Alaska Native community, so those circumstances are different from those of any other Senator,” says Jerry McBeath, professor emeritus of political science at the University of Alaska Fairbanks. “She has the latitude to vote against the confirmation.”

Alaska Natives, who remain an influential part of Murkowski’s base, experience a significantly higher rate of sexual assault in the state. Alaska Native women comprised 42% of victims of all reported felony sex offenses in 2017, though they make up roughly 20% of the state population, according to a 2018 report from the Alaska Department of Public Safety. But native groups had also voiced opposition to Kavanaugh based on his rulings on the rights of native peoples.

The Alaska Federation of Natives praised Murkowski’s vote on Friday. “She heard our concerns about Judge Kavanaugh’s record on the constitutional rights of Native peoples, and voted accordingly this morning on cloture,” the group said in a statement. “AFN will continue to advocate against his confirmation and will work to get other senators to join Senator Murkowski prior to tomorrow’s final floor vote.”

But it appears no Republican Senators will follow Murkowski’s lead.

Arizona Sen. Jeff Flake has said he intends to vote for Kavanaugh “unless something big changes.” Maine Sen. Susan Collins announced her support for Kavanaugh in a speech on the Senate floor Friday, all but assuring he will be confirmed. West Virginia Sen. Joe Manchin announced minutes later that he would vote for Kavanaugh’s confirmation as well.

“I feel pretty pessimistic about it, I guess, maybe that she only feels comfortable voting no because she knows he’s actually going to pass,” Johnson says of Murkowski. “I don’t l know what her reasons are voting the way she is. I know that it’s disturbing that she’s the only one willing to vote no.” 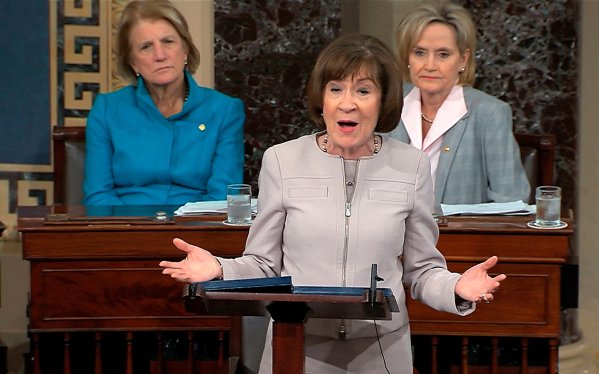