European Soccer Is Set Up to Protect Superstar Players. So What's Next for Cristiano Ronaldo?

Ideas
By Michael Caley
Caley is a writer and co-host of the soccer analytics podcast, The Double Pivot.

Nine years ago, Kathryn Mayorga signed a non-disclosure agreement presented to her by lawyers for the international soccer star Cristiano Ronaldo. Last week, in an interview with the German newspaper Der Spiegel and in court filings in Las Vegas challenging that NDA, Mayorga broke her silence and spoke out publicly. She says Ronaldo raped her in 2009 in a Las Vegas hotel room.

The allegations are now reverberating through the sporting world. The Portuguese superstar has been world player of the year five times and lifted the Champions League trophy with his club team three seasons in a row. His most recent contract with Nike is reportedly worth one billion dollars. But now Nike has released a statement that the company is “deeply concerned” about Mayorga’s allegations. Ronaldo denied the allegations himself on Instagram on Sept. 30, calling them “fake news.” The Italian club Juventus, which spent $117 million to acquire Ronaldo from Real Madrid over the summer, took to social media on Thursday to defend its new star. With controversy swirling, Portugal chose not to include Ronaldo in its squad for the next round of international fixtures, although both sides say the decision is temporary.

What comes next is still uncertain. The Ronaldo case is the the highest-profile story of sexual assault in soccer since the explosion of the #MeToo movement in 2017. Indeed, Mayorga has said she was inspired by reading the testimony of other women who chose to reveal publicly stories they had felt unable to speak about for years.

But as Mayorga tells her story, will Ronaldo face any consequences? One problem here is that the structure of European sports makes it hard for punishments to be leveled in similar situations. Such punishments in North American sports are hardly a given—hockey star Patrick Kane was not sanctioned by the National Hockey League after being accused of sexual assault in 2015, for example. But when they do happen, as with Major League Baseball suspending Addison Russell for 40 games due to an allegation of domestic abuse, the punishments are typically brought by the leagues. In Europe, however, there is no single European soccer league comparable to the NHL or MLB. When he signed for Juventus, Ronaldo left Spain’s La Liga for a different league in Italy, Serie A.

These various national leagues tend to be loose confederations in which the top teams hold outsized power. Serie A is unlikely to act in a way that punishes its top team. It would also be possible for the Italian Football Federation, which oversees both club and international soccer in the country, to level a punishment. But that power is not widely used in cases like this either. In 2016 in England, when the player Ched Evans was released from prison after serving time for rape, neither the league nor the English Football Association stepped in to suspend or otherwise sanction Evans. Ronaldo then has two lines of defense. His club, which invested heavily to retain his services, has spoken in his defense. The league and the national federation have little history of fighting disciplinary battles in similar situations and limited power to effectively challenge Juventus. So long as the club defends the player, the institutions of European soccer are structured to protect players like Ronaldo.

These institutional protections echo Ronaldo’s own protections, as reported by Der Spiegel. His lawyers went so far as to hire private investigators to trail Mayorga as they sought to discredit her accusations. In so many #MeToo cases, powerful men use the legal system to protect themselves from consequences and to silence those who speak up against them.

This has been standard in Ronaldo’s defense, with his lawyers threatening a lawsuit against Der Spiegel. Here, they are using another key institutional protection—defamation laws. Libel law in the United Kingdom places the burden of proof on the defense, meaning that a newspaper sued by Ronaldo for publishing details of the rape accusation would need to demonstrate to the court it had not defamed the soccer star. Much of the initial English-language coverage of the Ronaldo case came from American media, where publishers have less to fear from the legal threats of Ronaldo’s team.

But coverage is now intensifying, despite the legal hurdles. An outcry from women and feminist media critics challenged reporters to investigate the story. Events such as the re-opening of the criminal case by Las Vegas police, the public statement of concern from Nike, and Ronaldo’s and Juventus’ public statements have provided local media with clear facts to report.

And Mayorga’s allegations are not simply a matter of her word against Ronaldo’s. In her legal filing, Mayorga claims that medical examinations from the night of the incident confirm her account. She also brings forward a questionnaire in which it appears Ronaldo admits that Mayorga repeatedly said “no” and “stop” during the event. While these documents are not yet fully public or confirmed, they have been reported by Der Spiegel and would offer more material for investigation were they to become public.

The Ronaldo case, then, is developing slowly. While in the past an allegation like Mayorga’s might have been dismissed, and a denial like Ronaldo’s simply accepted, here the story continues. But it faces even more obstacles than a similar allegation would in American sports. The loose structure of the league system and more restrictive defamation laws both offer added protections to sports figures. Mayorga is speaking out and the platform of the #MeToo movement has enabled her voice to be heard.

Still, the European sporting context offers a variety of institutional supports to a powerful man seeking to avoid punishment after an allegation of assault. The weakness of sporting leagues and defamation law, combined with the vocal support of his club, continue to make it unlikely that Mayorga’s accusations will lead to serious consequences. 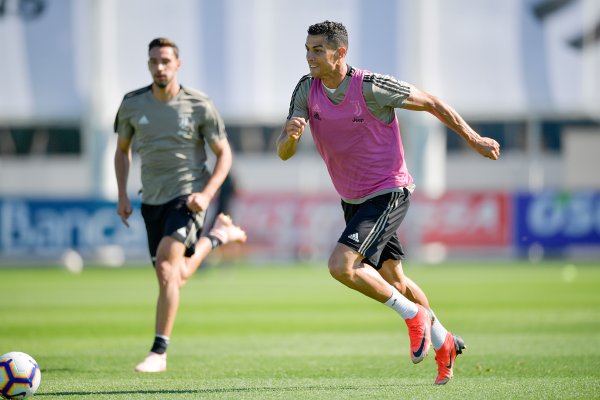 A Rape Accusation Against Cristiano Ronaldo Is Finally Getting Attention. It's About Time Soccer Had Its #MeToo Moment
Next Up: Editor's Pick