The Movie Peterloo Is Based on a Real Massacre. Here's What to Know About the True Story

On a warm day in August of 1819, 60,000 English people descended on St. Peter’s Fields, a town square in the northern city of Manchester, to demand a voice in parliament.

At the time, only two percent of people in Britain had the vote, and the governing classes were overseeing ever-more-desperate living conditions. The industrial revolution had driven down wages and a 12-year-long war against Napoleon had hobbled the British economy, leading to mass lay-offs. To make matters worse, restrictions on imported grain, designed to protect British producers, had the consequence of making food extremely expensive.

Local authorities had learned of the demonstration in advance and decided to shut it down. They did so with violence, sending the yeomanry — an armed team of voluntary cavalrymen — into the square. Fifteen civilians died and hundreds more were injured, making it at that point the bloodiest political clash in Britain’s modern history.

The bloodshed was dubbed the Peterloo Massacre and it became a defining moment for the country’s working-class reformers. It galvanized a movement for voting rights, which were gradually extended after 1832, and inspired cotton merchant John Edward Taylor to start the Manchester Guardian newspaper (now, The Guardian) in 1821.

A new movie from filmmaker Mike Leigh, out Friday in the U.K., takes on the story of the Peterloo Massacre — but how much does the movie stick to the complicated history? Here’s what to know:

Was Henry Hunt a real person?

Much of Leigh’s film hinges on a group of reformers in Manchester trying to persuade famed orator Henry Hunt to address their protest. Played by Rory Kinnear as a brilliant but conceited jerk, Hunt was indeed at St. Peter’s Fields; Britain’s National Archives still hold the letter inviting him to speak. Hunt wasn’t hurt in the massacre, but the white top hat he wore on the day was skewered by a sword and became a symbol for the reform movement.

After a spell in prison for his radical views, he became a member of the British parliament. His political agitation helped usher in the Reform Act of 1832, which expanded voting rights to 18% of Britons. Ironically, he was then voted out of office.

Did someone really throw a potato at the Prince Regent?

Leigh depicts a disgruntled old man taking a potato from his wife’s basket and lobbing it at the elegant carriage of George IV, who was at the time Prince Regent, due to the illness of his father King George III. When news of the attack breaks in parliament, Home Secretary Lord Sidmouth uses it as an excuse to suspend civil liberties and repress political meetings.

That chain of events did happen — but in real life, the Prince Regent was hit two years before the events of Peterloo. And historians are pretty sure the projectile was a rock or a bullet, not a potato.

Did the yeomanry really get drunk before shutting down the protest?

Rumors handed down over generations claim that the yeomanry, put on standby ahead of the protest, had hung out in taverns getting riled up to take on the protesters. Hunt later referred to “drunken, infuriated yeomanry” at his trial. But there is no hard evidence for the claim.

Did one yeoman really speak up for the people?

Historians quote a resident who said he heard a yeoman shout “For shame! For shame, gentlemen! What are you about? The people cannot get away!”

Did a baby really get trampled by a horse?

The youngest victim in the massacre was 2-year-old William Fildes. His mother was carrying him across a road when a yeoman struck her and William fell into the horse’s path. Authorities later blamed his mother. A pregnant woman, Mary Heyes, died in the same way.

Did journalists really make up the name Peterloo right after the massacre?

Local journalist and political radical James Wroe, editor of the Manchester Observer at the time, coined the name as a pun combining the location of the event (St. Peter’s Fields) and Waterloo, the battle against Napoleon that the British government was fiercely proud of winning just a few years earlier.

In the film Leigh shows two journalists putting the name together as they wander St. Peter’s Fields on the evening of the massacre, but in reality Wroe published the name in a series of pamphlets, the first coming out a week and a half after the demonstration. They were called Peterloo Massacre: A Faithful Narrative of the Events. He was later arrested for promoting sedition. 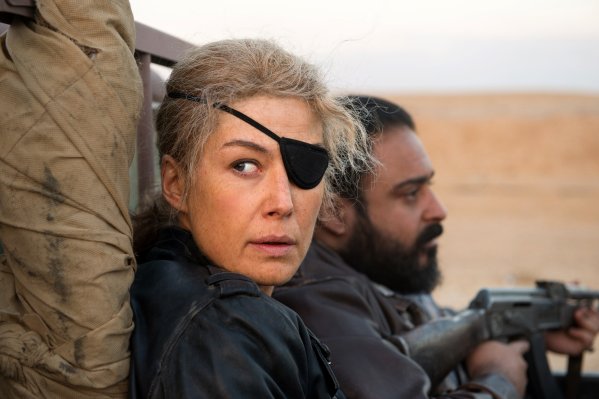 A Private War Shows What It’s Really Like to Report on War
Next Up: Editor's Pick