Everything You Need to Know About Carnage, the Villain in the Venom Post-Credits Scene

Warning: Spoilers for Venom ahead

Venom may be an anti-hero, the sort of scary monster who only eats bad guys. But there are plenty of true villains in the Venom cinematic universe. Venom fought riot in his onscreen debut. And a teaser mid-way through the credits for the movie hinted that Venom would have to fight another Spider-Man universe baddie in a sequel.

Fans who stuck around through the Venom credits scene saw Tom Hardy’s Eddie Brock ride his motorcycle up to San Quentin prison for an interview with a prisoner. This is possibly the big exclusive he mentioned to his ex-fiancée Anne (Michelle Williams) at the end of the movie.

There, Brock meets a red-headed Woody Harrelson, who a guard helpfully informs the audience is a serial killer named Cletus Kasady.

Who is Cletus Kasady?

Kasady is an evildoer in the Spider-Man comics. As in the comic books, the movie version of Kasday passes the time in prison by writing on the walls of his cell with his own blood. Kasady warns Brock, “When I get out of here, there’s going to be carnage.” Though Kasady may not know it yet, Carnage will soon become his super-villain moniker.

Spider-Man fans might recognize the name: Carnage is one of the main villains to face off with Spidey (and the Avengers). In the comics, Cletus bonds with a symbiote named Carnage, just as Eddie bonded with a symbiote named Venom, to disastrous effects. A serial killer with super powers? That sounds pretty horrifying.

Cletus and Carnage’s union gets a bit complicated. In the comics, Eddie Brock does a stint in prison and his cellmate is none other than Cletus Kasady. While in prison, Venom produces an offspring named Carnage. (He reproduces asexually, in case you were wondering.) Venom doesn’t tell Eddie about it, and Venom and Eddie escape prison. Once they’re gone, Carnage bonds with Cletus.

It’s unclear whether Carnage and Cletus have already bonded when Eddie meets Cletus in the Venom film. It’s possible that Venom will spawn an offspring during Eddie’s visit to the prison, which will later worm its way into Cletus’ cell.

Carnage is more powerful than Venom—in part because he has a psychopathic serial killer as a host rather than just an intrepid journalist. In the comics, Spider-Man convinces Venom to form an uneasy alliance in order to hunt down Carnage.

If Venom gets a sequel—which will depend on whether the movie can overcome poor critical reviews and still dominate the box office—Carnage will probably be the main baddie.

How does Spider-Man fit in?

It’s unlikely that Venom will get Peter Parker’s help in taking down Carnage. Marvel Studios (which is owned by Disney) and Sony struck up a deal that allows them to share the rights to Spider-Man. Per those terms, the two studios can co-create Spidey solo movies starring Tom Holland (like Spider-Man: Homecoming and its upcoming sequel, Spider-Man: Far From Home). Marvel Studios can also use Holland in its films like Captain America: Civil War and Avengers: Infinity War.

Meanwhile, Sony will build out the Spider-Man universe with movies like Venom and Black Cat. But for now that world is one bereft of its central character. The heads of both studios have made it clear that Holland’s Spidey won’t be appearing in Sony’s growing slate of movies. Spider-Man was never even mentioned in Venom. In fact, Venom’s cinematic world may be one without superheroes at all, just super-powered parasites.

Given that Carnage proves more powerful than even Riot in the comic books, Venom will have his hands full fighting Carnage on his own in the second film. A brief scene in Venom suggested that Anne can also carry a symbiote without meeting dire consequences. Perhaps Venom can reproduce again, Anne could pair with the new symbiote and the erstwhile couple could team up to defeat Carnage. 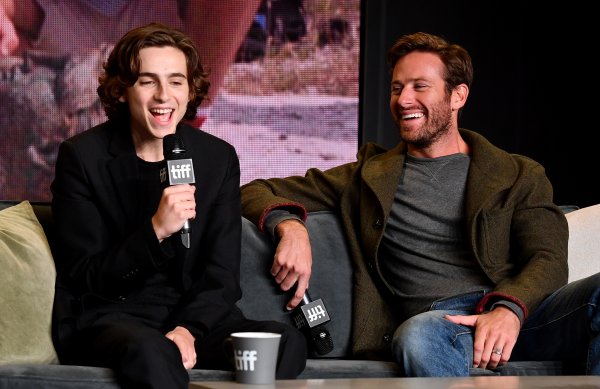 Timothee Chalamet on a Call Me By Your Name Sequel: “Armie and I Are 1000% In”
Next Up: Editor's Pick