A few minutes after the Nobel committee announced that Denis Mukwege and Nadia Murad had been awarded the 2018 Nobel Peace Prize, it was impossible to get anyone at Mukwege’s hospital in the Democratic Republic of Congo to the phone. Not because the lines were down, but because the jubilant cheers, drumming, whistle blasts and singing were so loud no one could speak.

Instead, Dr. Neema Rukunghu, a gynecologist and medical coordinator who has worked at Mukwege’s hospital for the past 10 years, held her cellphone up to the crowd gathered in the hospital’s courtyard, who whooped and laughed as TIME listened. She promised to speak when things had calmed down. It took a while.

“’Finally’, everyone is saying ‘finally,’” she eventually said of the decision to award the Nobel Prize to Mukwege and Murad for their efforts to end the use of sexual violence as a weapon of war and armed conflict. “This is the moment we finally get to shine a big light on the abuses of rape in war. This isn’t just recognition for Dr. Mukwege, it’s a recognition of the suffering of so many women, and hope that finally we can bring this kind of suffering to an end.”

They come at the issue from opposite ends—he as a gynecological doctor who has seen first hand the damage wrought by mass rape, she as a Yazidi survivor of sexual slavery willing to risk stigma by breaking the silence and shame around it. Each has campaigned fiercely for sexual violence to be recognized as a war crime on par with other atrocities such as the use of chemical weapons.

Mukwege, a Congolese gynecologist, specializes in helping women recover from the physical effects of sexual violence. He built Panzi Hospital in the eastern Congolese city of Bukavu in 1999, when the mounting costs of Congo’s brutal civil war started playing out on the bodies of women, victims of wartime rape. He and his specialized team of doctors have helped more than 30,000 patients since the hospital’s founding.

Read more: ‘When I Sing, the Bad Memories Disappear.’ Scenes from Panzi Hospital

A quiet but charismatic presence on the hospital grounds, Mukwege often says that rape as a weapon of war is more powerful than bombs and bullets. It spreads disease; its stigma destroys families, and breaks down society’s bonds. It leaves behind unwanted children who serve as a generational reminder of unspeakable violence. Wartime rape, one of his patients, Jeanna Mukuninwa, told TIME in 2015, “Is a living death.”

Rape may be a common war tactic, but it was only prosecuted as a crime against humanity starting in 1998, following the discovery of the rape camps used by Serb soldiers during the Bosnian war. Since then activists like Mukwege have lobbied to raise awareness of rape used in war, and to treat it as a war crime.

Still, it is one of the most underreported war crimes, largely because of the shame and stigma, but also because it is a crime largely visited on women. Mukwege’s dedicated voice on the advisory committee for the International Campaign to Stop Rape and Gender Violence in Conflict has been instrumental in raising awareness.

So too has been the harrowing testimony of Nadia Murad, who, with thousands of other women, was kidnapped from the northern Iraqi region of Sinjar by the Islamic State in August 2014. The women were considered war spoils, and auctioned off as sex slaves. “I did not want to kill myself—but I wanted them to kill me,” she told TIME in 2015, before going on to address the UN Security Council. Her harrowing public testimony paved the way for a more robust discussion of how to combat sexual violence in war.

Mukwege’s and Murad’s citation comes at a moment of global reckoning over powerful men’s behavior in the wake of the #MeToo movement. Sexual violence in conflict may be at the far end of the spectrum of male entitlement, but it shares some of the same silencing effects of stigma and shame. “It’s a strong message in a troubling time,” says Rukunghu. The Nobel recognition makes it clear that silence over sexual violence of any kind is no longer acceptable. 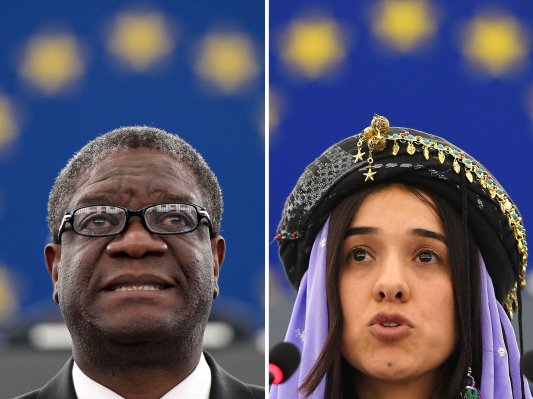