One Week On, Indonesia Quake Survivors Begin to Worry About the Future

When Amirudin stopped running, he thought he had stopped moving. The shop across the street, a mango tree, his aunt’s house — everything looked like it was rushing past him as he stood on a block of asphalt clinging to his infant daughter. About five seconds later, when everything stopped, he realized he had ridden a strip of road like a surfboard as a river of mud engulfed half of his village.

“I thought we were doomed, like it was the apocalypse,” the 35-year-old tells TIME, recalling the 7.5-magnitude earthquake that struck the coast of Indonesia’s Sulawesi island on Sept. 28. In this small village about an hour south of Palu, the city that bore the brunt of the quake and tsunami, the ground split apart like a paddy field in the dry season. One villager captured a video of the earth crumbling into a honeycomb-like pattern and wobbling as though the pieces were tossed onto a waterbed.

One week after the disasters, at least 1,558 people have been confirmed dead, and the toll is expected to rise as rescuers continue to comb through the wreckage. A mass grave has been dug into the side of a mountain to bury hundreds of unidentified bodies.

Indonesia, a Southeast Asian archipelago seated on the seismically volatile Pacific “Ring of Fire,” is prone to disaster, but this one had a distinct quality. Survivors here in Sibalaya and several nearby areas described a phenomenon known as liquefaction, whereby an earthquake blends underground water and sand into sludge, loosening the earth above.

The remaining half of Sibalaya now terminates at a dead-end road that stops at a concrete cliff overlooking a swamp of debris. Everything seems normal right up to the edge; then suddenly all that lies ahead is wasteland. A soccer field that used to be on one side of the road is now on the other. A row of houses, including Amirudin’s, floated some 600 meters away and collided in a pile-up of lumber and corrugated iron.

Across Palu province, more than 70,000 people have been left homeless. In the city, many have gathered in displacement camps. In more remote places like Sibalaya, they wait by the side of the road for a truck or a helicopter to bring them relief — which happens rarely.

The worst affected areas were all but cut off in the immediate aftermath of the disaster. Even under normal circumstances, Palu is an eight-hour drive from the nearest major city of Mamuju, and about 20 hours by road to the island’s capital Makassar. For two whole days after the tragedy, looters stripped the city’s shops bare.

But after a week of suffering in near-isolation, aid is now beginning to trickle into the region. “Much more assistance is coming in now,” says Col. Verianto, who oversees aid delivery from a military command center in the devastated Palu neighborhood of Sigi. The first aid deliveries arrived on Sunday, Verianto says, and have increased in the days since.

But aid alone can only do so much in Palu. Power is still out in most of the city, as is running water. Aid workers say it is highly unlikely that the worst-hit areas of the city can ever be rebuilt, and that tens of thousands of displaced people face a future of living in camp-like conditions for years.

Many are trying to leave. Outside the airport, hundreds of newly homeless people wait hours in the sun for one of a few hundred seats on a flight to the capital that have begun taking off each day. Others were moved by rumors that another disaster is imminent.

“I heard people say that it will happen again,” says Dewi, 30, while waiting for an outbound flight with her youngest daughter. She watched her street fall into a sinkhole, and doesn’t want to risk seeing it repeated. “I decided to leave because someone said there will be another one, a bigger one, and Palu will sink into the mud.”

For Amirudin, there is nowhere to go. His village is so remote that rescuers didn’t have enough fuel to drive his critically-injured relative to a hospital; she died of her injuries almost a week after the quake.

Others escaped with their lives, if nothing else. After the ground stopped gliding, he looked around to find a few neighbors and their families had survived on another chunk of the road. The first thing he noticed was that none of the children had been crying.

Although they were shocked, they were safe. “I felt very grateful,” he says. “I just sat there with my daughter for a few minutes, looked around and said to the others, ‘Let’s calm down, let’s pray.’” 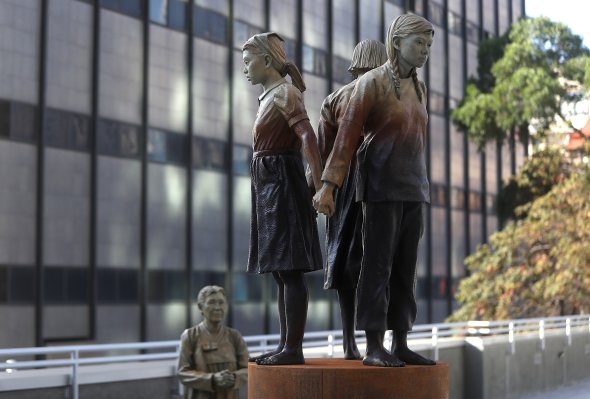