Michael Beschloss Spent 10 Years Studying Presidents at War. The Worst Parts of That History Are Still Worth Worrying About

Emmy-winning presidential historian Michael Beschloss is the author of nine books on the American presidency, and his latest, out Tuesday after a decade of work on the project, zeroes in on one particular part of that complicated job: being Commander in Chief.

He spoke to TIME about the book, how the American approach to war has changed and why President Trump might want to brush up on some history.

What’s in here that people won’t find in other books on presidential history?

What the book is really about is that the founders of this country were terrified of one particular thing, and that was that Presidents of the United States would be able to start wars almost single-handedly. They looked at England and European monarchs, and one of the things they wanted most to avoid was, when the monarchs grew unpopular, they would start a war as a pretext to unite the country and get more popular — even if the war wasn’t necessary. As a result, you look at the Constitution and it says if you want a war, Congress has to give a war declaration.

Nowadays presidents can start wars almost single-handedly. Last time we had a war declaration from Congress was 1942, and we’ve had some pretty major wars since then. If you go through the history of presidents waging major wars, over 200 years, there have been a lot of cases where presidents have used those wars to expand their own power, to trample civil liberties, to constrict our democracy and, in certain cases, almost risk dictatorship. And all those things are worries that we’ve got today.

Were there any particular myths on the subject that you were hoping to debunk?

What I found in the 10 years of writing this book, is that men and women on the battlefield were uniformly heroic — but that wisdom and heroism was not matched in the presidency, beginning with James Madison. Madison was, needless to say, one of the architects of the Constitution, one of the ones who felt the most strongly that America should never be at war unless it was absolutely necessary for our security and unless Americans understood and supported it. Yet he’s the president who leads America into the War of 1812, which probably was close to being the most unpopular war in American history. He knew it was not supported; almost half of Congress was against it. He allowed himself to be pushed by people in his own party who were telling him to stop the British from harassing our ships and gain our psychological independence and grab Canada and make it part of the U.S. His feeling for democracy was so strong that, rather than assert himself and say this is not a necessary war, he allowed himself to be convinced. And he lived to deeply regret it in his old age. It was bad advice. He was so inclined not to be a dictator that he listened too much. The other irony is by the time the war began, the British already decided to stop harassing ships, but because of the length of time it took for news to come across the Atlantic, Madison didn’t know that yet. A tragic comedy of errors.

Was Madison’s experience unusual? How much of the decision to go to war is typically made by the President versus the people who advise him?

Presidents all have advisers but they don’t have to take the advice. In [Lyndon] Johnson’s case, he was advised perhaps more than anyone else by Robert McNamara, his Defense Secretary, who kept on telling Johnson that if President Kennedy were alive, he would have escalated in Vietnam. The advice he should have taken was from his mentor in the Senate Richard Russell, the chairman of the Armed Services Committee, [who told him], ‘You don’t want to get involved in Vietnam. It will be like Korea, but it will take ten years and we won’t win.’ Perfect advice in retrospect, but it was advice Johnson did not take.

You usually find presidents being pretty willful people. Polk was the one person in his administration, from the very beginning, who was pushing for war over the advice of almost all of his advisors. He kept on pushing and they couldn’t understand why and it turned out he wanted the war because he wanted to defeat Mexico, and then to say, ‘Mexico, you have to sell us New Mexico and California at a bargain price.’

For your security, we've sent a confirmation email to the address you entered. Click the link to confirm your subscription and begin receiving our newsletters. If you don't get the confirmation within 10 minutes, please check your spam folder.
Penguin Random House

Do presidents tend to learn from history, and their predecessors’ successes and failures, when it comes to making the decision to go to war?

Oftentimes they’ve used it dreadfully. When Johnson was dealing with Vietnam in ’64 he thought this was Munich all over again, that if he didn’t stand up to the North Vietnamese — and, through them, to the Russians and Chinese — that this would invite a more dangerous war that the U.S. would have to fight. We know now that there were a lot of things that the Vietnam War resembled in ’64 but they were not Munich. It was a very bad parallel. On the other hand, we were blessed by the fact that FDR was president in ’41 because he had been Assistant Secretary of the Navy under [President Woodrow] Wilson all through World War I and that gave him a degree of understanding, culminating in the need for a new version of the League of Nations. It’s hard to imagine he would have had that kind of insight if he had not had that earlier experience.

And that’s how we get the United Nations?

That was totally out of watching Wilson asking the Senate to endorse the League of Nations, and failing. So Roosevelt all through the war was asking himself, ‘How do I win the war [and] how do I pave the way so we can finally have an international organization?’

But FDR’s conduct during World War II is criticized too, for example, for not getting into the war sooner than Pearl Harbor.

Some conspiracy theorists say Roosevelt planned Pearl Harbor to outrage Americans and get us into the war, and I believe that was not true for all sorts of reasons. He wouldn’t have put Americans in a position to be killed like that, that’s just too much to ask. But, Roosevelt, frustrated by the fact that the country was so isolationist, begins being much more aggressive with American ships in the North Atlantic. He knew if you have more American ships in North Atlantic where Germans are sinking ships, there is the danger that Germans will sink an American ship. I’m speculating here but I’m just using logic: Roosevelt knew that if an American ship was sunk in early 1941, that would make Americans a lot more open to the idea of going to war against Germany. I quote from the Secretary of War Henry Stimson’s diary that Roosevelt “shows evidence of waiting for the accidental shot of some irresponsible captain on either side to be the occasion of his going to war.”

His successor Truman made a key decision that future presidents copied, going to war in Korea without a declaration of war from Congress. How did that come about?

I admire Truman, but he did it for really bad reasons, and the main reason was that he was worried that if he went to Congress asking for a war declaration, and there was a debate, a lot of people might say things that might hurt him in the midterms. And that is the kind of grubby behavior you do not expect from Truman.

It’s ironic because, as you discuss in the book, Truman was a big student of history.

He [once] said “Not all readers become leaders. But all leaders must be readers.” The point he was making was not that every president has to be a PhD in American History, but you at least have to know something about where earlier presidents and American citizens succeeded and failed so you don’t make the same mistakes. And the irony is that Truman said all that, and he never had a college education because his family was too poor.

In Donald Trump’s case, I think he wears as a badge of honor that he doesn’t read books. It’s hard for me always to see how you can have a president who is really effective [in that situation]. When you’re president, just about the only user manual you’ve got is what earlier presidents have done. 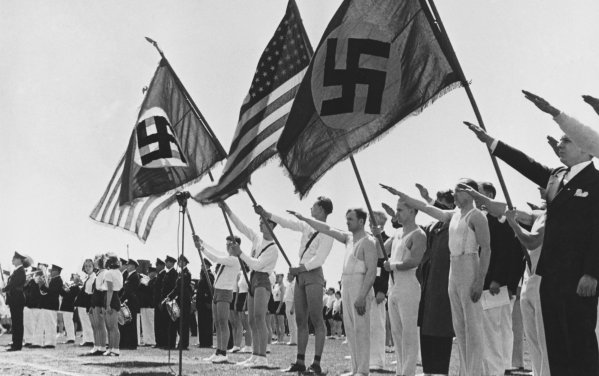 More Americans Supported Hitler Than You May Think. Here's Why That History Isn't Better Known
Next Up: Editor's Pick