In an incident that quickly went viral for its dramatic illustration of a divided America, two women got into a finger-pointing argument in a Colorado grocery store over the right for two female Hispanic customers to speak Spanish while shopping.

The fiery showdown led to the arrest of 64-year-old Linda Dwire, who argued that the customers should speak only English when out in public.

Video of fellow customer Kamira Trent confronting Dwire and defending the Hispanic women has captivated social media users. In the video, Trent furiously yells at Dwire and tells her to leave the store.

“I’m calling the cops. You leave these women alone! Get out!” Trent is heard saying in the video.

Dwire attempts to defend herself by telling Trent that she comes from a different generation, but Trent quickly cuts her off.

“No, I do not. I have respect. You do not harass people,” Trent says as she points toward the store’s exit.

As Dwire begins to walk away she tells Trent, “You will lose your country.”

Trent replies, “You do not harass Hispanic women!”

Video of the incident was posted to Facebook by Fabiola Velasquez, who said she was with her friend Isabel Marin when Dwire approached the two, telling them they should speak English if they are going to live in this country.

“I never thought that this would happen to me,” Velasquez posted in Spanish. “I was with a friend chatting in the store in Spanish and then a woman begins to insult us and tell us if we live in this country we should not have to speak Spanish, only English.”

“I want to thank the girl — who we did not know — for defending us and calling the police. I believe the woman who was yelling at us was arrested,” Velasquez continued in her post. “I’ve always seen videos like this online and they used to enrage me and now that it happened to me, I felt a great sense of helplessness.” 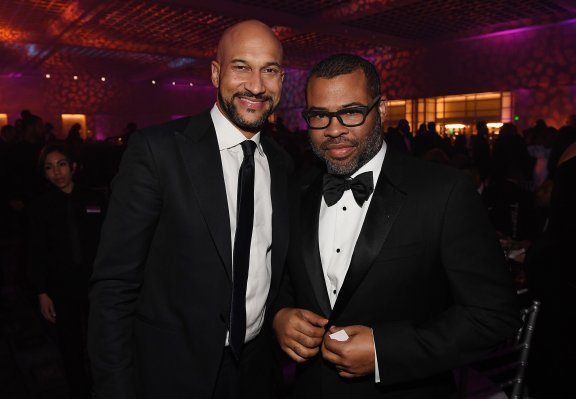 People Keep Using the Key and Peele Meme to Share Their Favorite Things
Next Up: Editor's Pick