Judge Brett Kavanaugh testifies to the Senate Judiciary Committee during his Supreme Court confirmation hearing in the Dirksen Senate Office Building on Capitol Hill September 27, 2018 in Washington, DC. Kavanaugh was called back to testify about claims by Christine Blasey Ford, who has accused him of sexually assaulting her during a party in 1982 when they were high school students in suburban Maryland.
Jim Bourg/Pool—Getty Images
By Abigail Abrams

The FBI has completed its investigation into the sexual assault and misconduct allegations against Supreme Court nominee Brett Kavanaugh — but much about the investigation remains unknown to the public.

California psychology professor Dr. Christine Blasey Ford accused Kavanaugh of sexually assaulting her when the two were in high school. After her allegations became public last month, two other women, Deborah Ramirez and Julie Swetnick, also came forward with other allegations of sexual misconduct against the nominee. Kavanaugh has denied all of the allegations against him.

Senators began to read the FBI’s report Thursday, and their responses largely fell along party lines. Senate Judiciary Committee Chairman Chuck Grassley said the FBI’s investigation had “found no hint of misconduct” while Senate Democrats blasted the investigation as “incomplete” and suggested the White House may have prevented the FBI from conducting a thorough investigation.

The Senate is expected to take a procedural vote on Friday and will likely move toward a final confirmation vote on Saturday. Republicans need 50 votes to confirm Kavanaugh, and on Thursday it looked increasingly likely they could get to that number, as two key undecided Senators—Arizona Sen. Jeff Flake and Maine Sen. Susan Collins—indicated they were initially satisfied with the FBI report.

The FBI investigation was unlikely to definitively prove whether Kavanaugh sexually assaulted anyone in high school or college, but the circumstances of the inquiry have inflamed partisan tensions. The concerns around the probe largely revolve around the Friday deadline and the limited scope, both of which were decided by the White House last week. Throughout this week, reports surfaced of people who said they had information about the allegations trying and failing to share their information with the FBI.

There was some disagreement on Thursday about how many people the FBI actually interviewed. White House spokesman Raj Shah told CNN on Thursday that the FBI contacted 10 people and interviewed nine, but some Senators seemed to believe 10 people had been interviewed.

Here is what we know about who the FBI has talked to and who they have not.

Who has been interviewed by the FBI?

Deborah Ramirez — The second woman to accuse Kavanaugh of misconduct, Ramirez has alleged that Kavanaugh exposed himself to her while both were in college at Yale University, which Kavanaugh denies. Ramirez was interviewed by the FBI for more than two hours on Sunday, but her lawyers expressed frustration that the agency did not follow up with additional witnesses they supplied. Her lawyers wrote they were “deeply disappointed” by the investigation in a letter to FBI Director Christopher Wray.

Mark Judge — Judge, a high school classmate of Kavanaugh, was interviewed this week. His interview was seen as crucial to the investigation because Ford says he was in the room for her alleged assault. Judge previously sent two letters to the Senate Judiciary Committee saying he did not remember the events Ford described that he “never saw Brett act in the manner Dr. Ford describes.”

Judge’s own memoir, however, seems to support one aspect of Ford’s story. She says that she saw Judge at a local Safeway shortly after the alleged incident and that he appeared very uncomfortable around her. In his memoir, Judge writes that he worked at the local grocery store during the summer before his senior year, which would have been the same year Ford is talking about.

Chris Garrett — Garrett, who was nicknamed “Squi” on Kavanaugh’s high school calendars, also participated in a FBI interview this week. He is the most frequently mentioned friend on Kavanaugh’s calendars and was listed as attending a July 1, 1982 party that includes several of the attendees Ford mentioned in her allegation.

Ford also told the Senate during her testimony last week that she and Garrett were “going out” during the summer in question, which could have meant she attended events with Kavanaugh.

P.J. Smyth — The FBI interviewed Smyth this week. He is another person that Ford alleges was at the party, and is mentioned as being at the July 1 party on Kavanaugh’s calendar. Smyth previously said through his lawyer that he had no knowledge of the party or the behavior that Ford alleged.

Leland Keyser — Keyser is a high school friend of Ford’s, who Ford says was at the gathering where the alleged assault occurred. The FBI interviewed her this week, according to the New York Times, but Keyser has previously said she does not remember the incident. She did tell the Washington Post in an interview before Ford’s Senate testimony that she believed Ford’s allegations.

Timothy Gaudette — The FBI also interviewed Gaudette, who was noted as the host of the July 1 party on Kavanaugh’s calendar.

Who is not known to have been interviewed by the FBI?

Christine Blasey Ford — Ford’s lawyers have said she was not interviewed by the FBI, a point that caused significant concern among Senate Democrats as they reacted to the FBI’s report on Thursday.

Brett Kavanaugh — The FBI also did not interview Kavanaugh. The agency did not pursue the Supreme Court nominee or his first accuser because it did not receive clear authority from the White House to do so, Bloomberg reported on Wednesday.

Russell Ford — Christine Blasey Ford’s husband has said that she told him about her alleged assault years ago. He provided a sworn declaration to the Senate Judiciary Committee but was not contacted by the FBI.

Julie Swetnick — Swetnick, who alleged that Kavanaugh was present at parties where she and other women were gang raped, has not been contacted by the FBI. The bureau’s investigation did not include allegations made by other women, including Swetnick.

Jeremiah Hanafin — Hanafin is a former FBI agent and the professional polygraph examiner who conducted the polygraph that Ford passed in August. Ford’s lawyers said he has not been contacted by the FBI.

Kavanaugh’s other high school classmates — There are a number of people who attended Georgetown Prep with Kavanaugh or knew him during his high school days and have spoken out about his behavior during that era. First, Tom Kane and Bernie McCarthy were Georgetown Prep classmates also listed on Kavanaugh’s calendar at the July 1 party. They are not known to have talked to the FBI.

Then there is Renate Schroeder Dolphin, who initially signed a statement of support for Kavanaugh, but asked that her name be removed from that list after she found out about references to her in Kavanaugh’s yearbook that she viewed as disrespectful.

One of the nominee’s freshman year roommates, James Roche, went so far as to write that Kavanaugh “stood up under oath and lied” about his drinking. Another classmate, Chad Ludington, issued a statement saying that when Kavanaugh got drunk, “he was often belligerent and aggressive.”

Then there are classmates who have said that they “never saw Brett black out” and have denied that he acted aggressively towards women. Neither group is known to have been interviewed by the FBI.

Witnesses suggested by Ramirez — Ramirez’s lawyers said they provided a list of more than 20 additional witnesses and their contact information to the FBI. They said these witnesses may have corroborating information related to her allegation against Kavanaugh and that they were not aware of any of them being contacted by the FBI.

Witnesses suggested by Ford — After the FBI concluded its investigation, Ford’s lawyers wrote a letter to FBI Director Wray objecting to the bureau’s methods and calling its investigation “a stain on the process, on the FBI and on our American ideal of justice.” The letter also included a list of other witnesses that Ford’s lawyers provided to the FBI and who they say were not contacted. 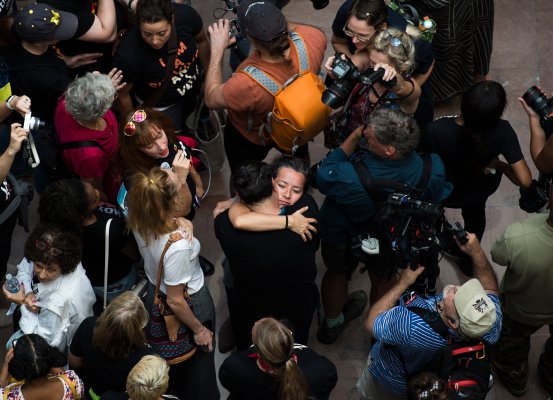 'People Are No Longer Afraid'
Next Up: Editor's Pick