She Was a Teenage Victim of Domestic Violence and Rape. She Sought Help. This Week, Iran Executed Her

Zeinab Sekaanvand Lokran, a 22-year-old Iranian Kurdish woman, at risk of execution following an unfair trial in which she was convicted of the murder of her husband. She was 17 years old at the time of the crime.
Private—Private
Ideas
By Mansoureh Mills
Mills is an Iran researcher at Amnesty International.

“Child bride.” “Criminal.” “Juvenile offender.” These are some of the many labels assigned to Zeinab Sekaanvand during her far too short life. Sekaanvand, who was executed on Tuesday in Urumieh prison in Iran’s West Azerbaijan province, was rarely seen for who she really was: a vulnerable young woman trapped in a cycle of violence and sexual abuse since childhood.

Sekaanvand, who was 24 when she was hanged, had spent almost a third of her life in detention. In February 2012, she was arrested and put on trial over the murder of her husband, a crime that took place when she was 17 years old. She had reported being raped by her brother-in-law and tortured by police after her arrest. What’s especially chilling about Sekaanvand’s case is the number of points at which the Iranian authorities could have intervened to help her. Sekaanvand reported the abuse she suffered. She spoke out, yet she was ignored.

It’s a scenario that is all too familiar to many women and girls. But because Sekaanvand lived in Iran, her story took an even darker turn.

There are many more like Sekaavand in Iran—which is one of the world’s last countries to execute “juvenile offenders.” At least 88 people who were under the age of 18 at the time of the crime are currently on death row, some of whom have been languishing there for over a decade. In particular, Zeinab’s case echoes that of Fatemeh Salbehi, who was executed in 2015 at the age of 23 for the murder of her husband, whom she had been forced to marry when she was 16.

Looking closer, Sekaavand’s case reads like a textbook explainer of the myriad ways the Iranian justice system stacks the odds against women.

Born in northwest Iran into an impoverished and culturally conservative Iranian Kurdish family, Sekaanvand was 15 years old when she ran away from home to marry a man called Hossein Sarmadi. Zeinab had said she saw the marriage as her only opportunity for a better life. But her new husband was violent, and the relationship quickly became physically and verbally abusive.

Sekaanvand requested a divorce on more than one occasion but her husband refused. In Iran, the legal system’s deeply-entrenched discrimination against women and girls often prevents them from getting a divorce, even if they are subjected to domestic violence.

Although Sekaanvand registered several complaints about her husband’s violent abuse with the police, they repeatedly ignored her pleas for help and failed to launch an investigation against him.

Desperate, Sekaanvand tried to return to her parents, but they had disowned her for running away. She said that, meanwhile, Hossein’s brother was regularly raping her. Still a child, she was under the power of two violent and abusive men, and no one would help her.

In February 2012, Sekaanvand was arrested for the murder of her husband. She was denied access to a lawyer and said she was tortured and beaten by police officers during questioning. It is under these circumstances that Sekaanvand “confessed” to stabbing her husband. It was only at her final court hearing, three years after her arrest, that the authorities provided her with a lawyer. At this point, she retracted her “confession,” telling the judge that her husband’s brother—her alleged rapist—had committed the murder.

Sekaanvand said in court that her brother-in-law had told her that, if she accepted responsibility, he would pardon her. Under Iranian law, murder victims’ relatives have the power to pardon the offender and accept financial compensation instead. But rather than request further investigations, the authorities dismissed Sekaanvand’s statement—convicting and sentencing her to death by hanging.

Sekaanvand’s trauma did not end there. In 2015, while in Urumieh prison, Sekaanvand became pregnant after marrying a male prisoner. Her child was stillborn in September 2015. Doctors said her baby had died in her womb two days earlier due to shock—around the same time that Sekaanvand’s cellmate and closest friend had been executed. The authorities forced Sekaanvand to go back to prison the day after the stillbirth and did not provide her with any postnatal care or psycho-social support.

Before she was executed this week, the authorities carried out a pregnancy test on Sekaanvand. When it came back negative, they took it as a green light to execute her.

Sekaanvand’s life was defined by a legal system which brazenly disadvantages women. A system which sets the age of criminal responsibility at nine years for girls and 15 for boys—and the legal age of marriage for girls at 13. It does not criminalize rape of a woman by her husband. It violently imposes the abusive, discriminatory and degrading practice of forced hijab (veiling) on women and young girls and then jails the ones who campaign against it.

It’s a system where, ultimately, a woman’s testimony is worth less than a man’s. That’s why no one in power listened to Sekaanvand’s story. They chose to end it instead. 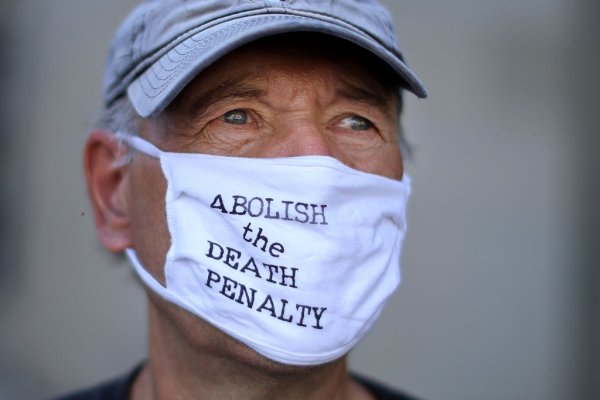 Global Recorded Executions Reach Lowest Level in a Decade
Next Up: Editor's Pick