Brett Kavanaugh speaks at the Senate Judiciary Committee hearing to become an associate justice of the Supreme Court of the United States, on Capitol Hill in Washington, DC, USA, 27 September 2018.
Pool—Getty Images
Ideas
By Marci A. Hamilton
Hamilton is a Professor at the University of Pennsylvania and the CEO of CHILD USA.

For those of us who work on issues involving the sexual assault of children, the Judge Brett Kavanaugh sexual-assault discourse has been jarring. This is particularly so given that his first accuser, Dr. Christine Blasey Ford, was 15 years old and therefore underage at the time of the allegations. And it is even more so the case because of how it contrasts with what we’ve supposedly learn from the recent revelations about the trauma of clergy sexual abuse.

The recent Pennsylvania grand jury report regarding the sex abuse perpetrated six dioceses over 70 years has yielded unprecedented anger in the United States and abroad. The coverage has been nearly uniformly deferential and supportive of the victims. Attorney General Josh Shapiro, who led the investigation, rightly has been hailed as a hero for survivors, and state lawmakers are now moving forward on meaningful reform of its child sex abuse statutes of limitations to afford justice to the victims whose claims are now barred.

No one has been wringing their hands over the possibility of falsely maligning “good men,” as the details in the report leave no question that the crimes described were harrowing and supported with ample evidence. The foundation of this is the last 16 years of the developing clergy sex abuse story that started with the Boston Globe’s Spotlight report on the cover-up of child sex abuse in the Boston Archdiocese. The public has been educated to come to understand that in fact many priests (about 6%, according to bishopaccountability.org) have abused children, and that bishops concealed the crimes and “solved” the problem by moving the perpetrators from parish to parish. Early on, there was handwringing over the fate of the good priests from politicians, bishops and parishioners. But as time has worn on, it has become increasingly impossible to think that any of the clergy were ignorant of the facts. False claims have not proven to be a significant concern.

There was a time when the bishops defended their decisions by saying that they used their judgment to report only the “credible allegations.” But one perpetrator after another has emerged from the bishops’ “not credible” category. The survivors’ movement has also pointed to how false allegations of child sex abuse are rare, which is empirically true, and argued that the bishops should have let the authorities decide on credibility. Thus, the culture now takes survivors when they first speak out at their word — to encourage them but also to get as many facts as possible to prosecutors. Even assaults from long ago can be important evidence as those who engage in sexual assault often repeat, and pedophiles do not age out, with many of them abusing children into their elderly years. The result of this new cultural willingness to listen has been the emergence from the shadows of victims among our family, friends and acquaintances. This has increased our knowledge of who needs help and who can be trusted.

While the tapestry of clergy sex abuse has become increasingly familiar — and its patterns have been broadly repeated in the Penn State, boarding school, Jehovahs Witness, ultra-Orthodox Jewish, Baptist, Larry Nassar, Delaware doctor and Boy Scout scenarios — there has been a complementary tale being told about men in power who have allegedly sexually abused people. In the #MeToo moment, it is less and less acceptable to assume the man in power is blameless or to say “boys will be boys.” Rather, the victims are to be heard and honored.

But it has been striking to witness politicians refuse to learn what all this hardship should have taught us.

At Judge Kavanaugh’s hearings, Republican Senators talked about a “presumption of innocence.” Sen. Lindsey Graham said, “You have to prove beyond a reasonable doubt that it did happen.” That is indeed the standard applied in a criminal trial when the outcome could be incarceration of the convicted. Maryland prosecutors would use it were they to press charges.

But because it is such a high standard, few actual prosecutions come forward out of the mountain of highly credible allegations. According to the Rape, Abuse & Incest National Network, only 31% of sex assaults are reported to police, and only .7% of the perpetrators get felony convictions. No one believes this is the case because sexual assault is so rare. It’s because prosecutors bring cases they can win.

Simply, the beyond-a-reasonable-doubt standard cannot be safely applied when the object is to learn who the hidden predators are or when one seeks to right the balance of power between victims and aggressors. There are public safety and moral justice considerations that make the beyond-a-reasonable-doubt standard the wrong fit in cases like institution-based abuse and the Kavanaugh nomination.

Those insisting on the presumption of innocence for Kavanaugh are stuck in the era when the presumption was that a powerful man simply should not be at fault unless there is overwhelming hard evidence and the woman’s claims in a “he said, she said” scenario are not to be taken too seriously. She can testify emotionally, but if she can’t prove it “beyond a reasonable doubt,” well, then, he is for sure Supreme Court material.

The project of this era is to identify perpetrators and prevent future sexual assault. That can only happen when we encourage victims to come forward, we listen, and we refuse to presume the alleged perpetrators’ denials should be taken at face value. The solution is to create a justice system that takes into account the barriers to victim disclosure and that opens the statutes of limitations so that those victims can come forward when they are ready. For too long, we have mistakenly shut them out of the justice system while their perpetrators operate at will.

The polling tells us that it is becoming less and less acceptable to presume the victim is lying or to build a furious defense for the powerful accused, even when he is Yale-educated and a federal judge. According to a Quinnipiac University Poll, 48% of Americans believed Ford; 41%, Kavanaugh. The public is learning. It is time our representatives do, too. 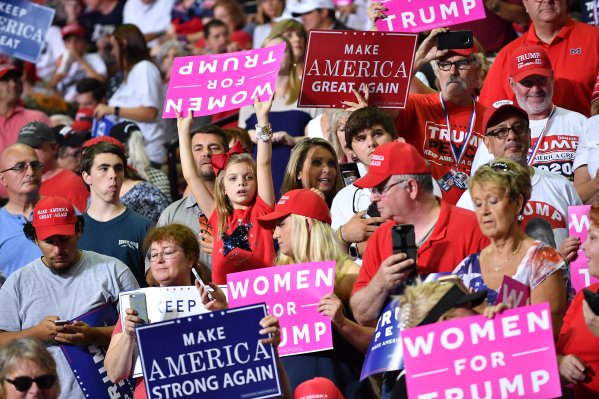 A Letter to White Women Who Support Brett Kavanaugh
Next Up: Editor's Pick