'Every Day We Find More Bodies': Indonesians Search Among the Rubble as Quake Death Toll Passes 1,500

The death toll from last week’s devastating earthquake and tsunami on the Indonesian island of Sulawesi soared to 1,558 on Thursday, as forensics crews combed through wreckage in blazing heat for the fifth day in a row.

A 7.5-magnitude quake struck the remote island on Sept. 28, triggering meters-high tidal waves and turning entire neighborhoods into muddy sinkholes. The cities of Palu and Donggala were among the worst hit, though rescuers are still struggling to reach remote coastal communities pounded by waves.

As of Thursday evening local time, 1,558 people are confirmed dead and 113 others are missing, according to Indonesia’s military authority, KOREM. Rescuers say the number of people missing is likely much higher; a team in the destroyed neighborhood of Balaroa said thousands are unaccounted for across the seaside province.

Indonesia is prone to disaster—the Southeast Asian archipelago sits along the Pacific “Ring of Fire,” a volatile strip along the ocean’s periphery where most of the world’s deadliest quakes have occurred. But last week’s twin tragedies were the worst to strike in years.

Balaroa, once a middle-class neighborhood in western Palu, was reduced to a mountain of rubble. Flies buzzed over body bags lying at the entrance to the area Thursday afternoon as soldiers and forensics teams dug for more casualties. Sitting on top of extra bags during a cigarette break, they said they no longer believed they would find anyone alive.

“Every day we find more bodies,” 2nd Lt. Nirwan Adi Putranto tells TIME at the foot of the rubble. When responders arrived, many houses were on fire, with bodies burning where they lay. An unknown number were buried by the wreckage. “It’s been five days now,” he says, “it smells disgusting.”

In the nearby village of Petobo, survivors recounted running outside when their houses shook. What they saw outdoors was more terrifying: a phenomenon known as liquefaction, in which an earthquake churns underground water and sand into muddy sludge, loosening homes and roads from the ground. Haji Dadi, a 48-year-old carpenter, says the road in front of him “looked like an ocean wave,” gesturing with his arms and looking blankly across the wasteland where he once lived.

More than 70,000 were made homeless by the disaster, according to government figures; many are now sleeping out in the open on roadsides. Others have joined clusters of displacement camps throughout the city of Palu, waiting for relief. It took several days for aid to reach—the airport was badly damaged and the few roads leading to the area were slowed by landslides, fissures and desperate thieves.

But help is beginning to arrive. Indonesian President Joko Widodo, also known as Jokowi, declared a national emergency three days after the earthquake struck, asking for international aid. The U.S. and Australia have both committed to assistance, while the U.N., the International Committee of the Red Cross, Catholic Relief Services and others have deployed response teams. Flights have resumed to the airport in Palu, 930 miles northeast of Jakarta, but road travel can take days from the island’s capital Makassar.

Jokowi first visited Palu two days after the quake, asking residents to be patient; he returned Wednesday morning, underlining a growing sense of urgency. “What I’ve observed after returning now is heavy equipment has arrived, logistics have started to arrive although it’s not at maximum yet, fuel has partly arrived,” Widodo told reporters.

Some services have resumed in Palu, but much of the city is still without power and running water. Hundreds of vehicles, mostly motorbikes, line up for hours at gasoline stations. Shops have been looted and almost all of the city’s food stalls remain closed.

Last week’s disaster was the worst since 2004, when a massive tsunami killed more than 230,000 people in 14 countries, mostly in Indonesia’s westernmost island of Sumatra. 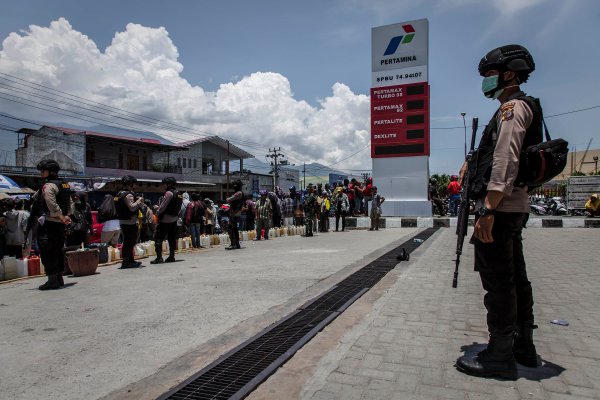